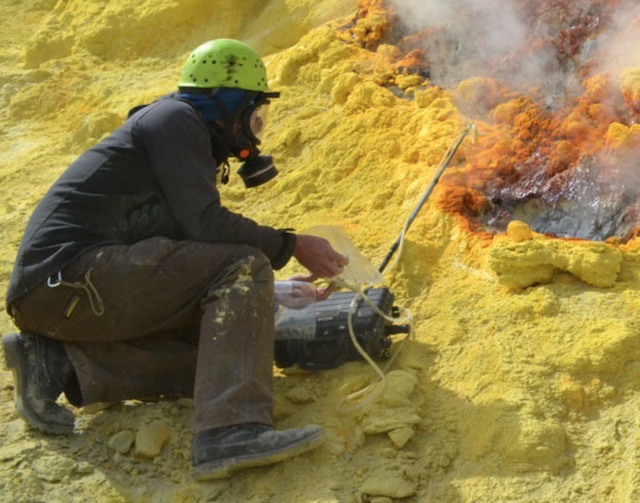 A new set of papers by a group of scientists involved in a 10 year study of volcanoes has advanced our knowledge of the deep earth.

Note that the day the dinosaurs died was the day that 425 and 1,400 Gt of CO2 was pumped into the atmosphere. This rapidly warmed planet and resulted in a global mass extinction event.

Guess the amount of CO2 we have generated since 1850?

We are already in the same league and have emitted about 850 Gt of CO2. The planet is already responding to this, and will continue to do so until it finds a new balance.

Who has been doing this work?

The Deep Carbon Observatory. They are a community of scientists, including biologists, physicists, geoscientists and chemists, whose work crosses several traditional disciplinary lines to develop the new, integrative field of deep carbon science

Does the CO2 emitted by Volcanoes explain Climate Change?

We have known for quite some time that Climate change is not explained by Volcanoes. This latest update rather robustly debunks the popular climate denialism claim that what we observe is explained by volcanoes.

What Volcanoes have they been monitoring and working with?

What is the new CO2 Flux data all about?

The new CO2 flux data from volcanoes showed that dormant volcanoes as well as active volcanoes emit large fluxes of previously “unseen” CO2, derived from the degassing of magma bodies in the crust below. These diffuse CO2 fluxes make a large contribution to the total volcanic outgassing carbon flux. Figure reproduced from Werner et al., 2019

Where are the published papers?

Below is a listing of the Deep carbon Observatory authored papers …

Comments from those involved

“Carbon, the sixth element, plays unique roles in our dynamic and evolving planet. It provides the chemical foundation for life, it serves as the primary source of our energy needs, it inspires a host of remarkable new materials, and it plays a disproportionate role in Earth’s uncertain, changeable climate and environment. These multi-faceted aspects of carbon have inspired decades of intensive research, most of which has focused on the near-surface carbon cycle—the oceans, atmosphere, and biosphere that display rapid changes and that are most influenced by human activities. Deep carbon research takes a longer-term, global view by considering the estimated 90 percent of Earth’s carbon that is hidden from view in the planet’s interior. We explore the forms, quantities, movements, and origins of carbon sequestered in Earth’s inaccessible core, cycling in the deep mantle, reacting in deep fluids, and lurking in a fascinating subsurface biosphere. We cannot understand carbon in Earth—we cannot place the changeable surface world in context—without the necessary baseline provided by deep carbon research.”

“For billions of years, Earth seems to have found a balance between carbon subducted deep into the interior and carbon emitted from volcanoes – processes that help to stabilize climate and environment. But how stable is that incessant cycling? No natural law requires that the amount of carbon going down … must exactly equal the carbon returned to the surface by volcanoes and other less violent means. No question is more central to the Deep Carbon Observatory than this balance between what goes down and what comes back up.”

“Earth is unique among the planets in our solar system in that it has liquid water at its surface, fosters life, and has active plate tectonics. Identifying all linkages between these phenomena serve as important steps in humanities enduring quest to understand the origins of Earth-like habitability. One absolute certainly, however, is that carbon plays a governing role. For example, Earth’s clement environment is related to atmospheric chemistry, which is warm enough to stabilize liquid water at its surface but cold enough to permit plate tectonics, and it is an incontrovertible fact that the carbon content of our atmosphere and oceans are directly linked with Earth’s climate”

“Important DCO outputs are steady-state models with powerful new data to evaluate the contemporary fluxes between carbon reservoirs in the deep Earth and their effects on everything from the evolution of life to the air we breathe. Armed with this understanding, we can better evaluate perturbations to, or non-linearities in, the Earth system through deep time.”

“We have achieved a much more complete picture of volcanic carbon dioxide degassing on Earth, reinforcing the importance of active volcanoes, but discovering that the subtle release over large hydrothermal provinces and areas of continental rifting are also dominant regions of planetary outgassing.”