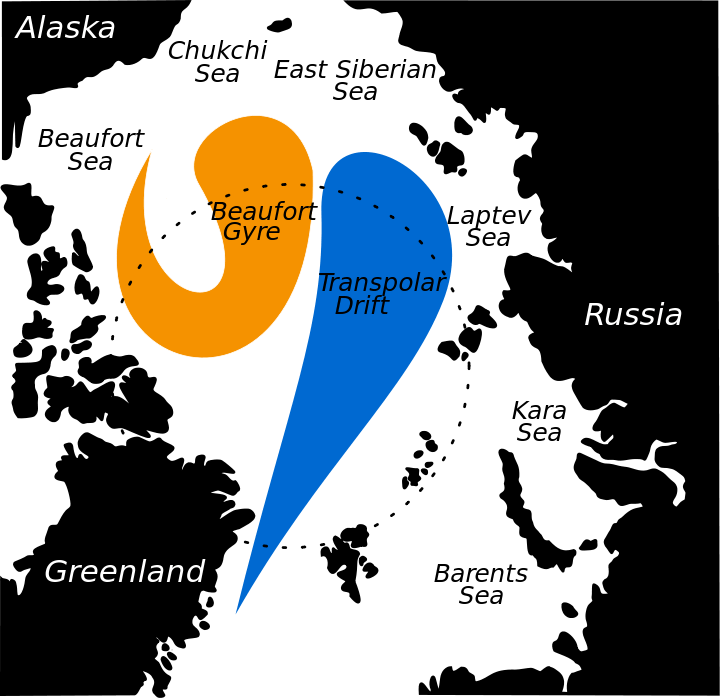 Their exists within the western part of the Arctic Ocean a current that is known as the Beaufort Gyre. This is wind driven and contains both ice and also water. As ice melts it has also been accumulating fresh water.

Climate change is impacting this system. It has the potential to have dire consequences for the climate system of the entire Northern Hemisphere.

Let’s jump into a new study that has some insights.

The New Study was published within Nature Communications on 6th Feb 2020. It explains that the Beaufort Gyre freshwater content has increased since the 1990s. Their latest results show that the declining Arctic sea ice has led to an increasingly energetic Beaufort Gyre.

What is the big deal here, the Arctic is far away?

The Beaufort Gyre gains energy from the winds in the south. It then loses energy in the north over a mean annual cycle.

Between 2003 and 2006, wind energy input was balanced by energy dissipation under sea ice over an annual cycle and there was not a significant net energy input to the Beaufort Gyre region.

This balance changed dramatically in late 2007.

Large open water areas associated with the then-record summer 2007 minimum sea ice extent meant that strong and persistent anticyclonic wind anomalies over the western Arctic did a large amount of work on surface currents in the southern Beaufort Gyre that were flowing at least twice as fast as the climatological average.

After 2007, wind energy input and energy dissipation underneath sea ice both intensified and became more seasonal.

Overall, the picture is one of a more energetic Beaufort Gyre system since 2007, with increased energy sources and sinks and increased eddy diffusivity balancing and dissipating.

As the ice cover recedes, more energy is pumped into the system. Right now there is a balance. The increasingly energetic system is accumulating more and more freshwater, vast amounts of it. If a tipping point is reached, and the balance ceases to prevail, then vast amounts of freshwater will be released out of the Arctic into the oceans. That has the potential to greatly disrupt existing ocean currents such as the Gulf stream that keeps much of Northern Europe warmer.

What do the Subject Matter experts think about this new Insight?

Beyond the direct calculations and methodology described within the actual study paper we also have commentary by the study authors on a NASA webpage.

Persistent westerly winds have also dragged the current in one direction for over 20 years, increasing the speed and size of the clockwise current and preventing the fresh water from leaving the Arctic Ocean. This decades-long western wind is unusual for the region, where previously, the winds changed direction every five to seven years.

Scientists have been keeping an eye on the Beaufort Gyre in case the wind changes direction again. If the direction were to change, the wind would reverse the current, pulling it counterclockwise and releasing the water it has accumulated all at once.

“If the Beaufort Gyre were to release the excess fresh water into the Atlantic Ocean, it could potentially slow down its circulation. And that would have hemisphere-wide implications for the climate, especially in Western Europe,” said Tom Armitage, lead author of the study and polar scientist at NASA’s Jet Propulsion Laboratory in Pasadena, California.

Exactly how is this possible?

The Gulf Stream, also known as the Atlantic Meridional Overturning Circulation and like a giant conveyor belt. Warm water flows North. It then evaporates and this more dense salty water sinks and flows south again. Dump a lot of fresh water into this system and you will disrupt this process.

“We don’t expect a shutting down of the Gulf Stream, but we do expect impacts. That’s why we’re monitoring the Beaufort Gyre so closely,” said Alek Petty, a co-author on the paper and polar scientist at NASA’s Goddard Space Flight Center in Greenbelt, Maryland.

“What this study is showing is that the loss of sea ice has really important impacts on our climate system that we’re only just discovering,” said Petty.

Beaufort Gyre in the Arctic – Tweets