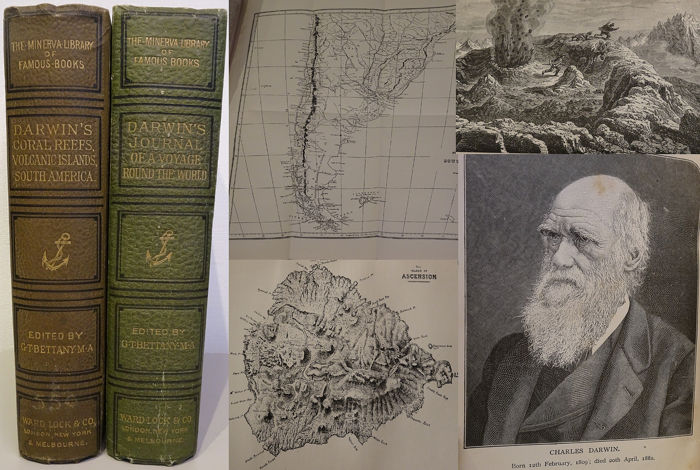 The 12th February is officially International Darwin day. Today is a day used on a global scale to celebrate Darwin’s contributions to science. I tend to have a Charles Darwin posting up to mark the occasion. Below are links to a few samples from previous years …

If curious to read more about who he was and what he did, then a good place to start is perhaps his Wikipedia biography page.

As I did last year, I’ll quote-mine a few snippets. This perhaps explains why Darwin gets his very own day on a global scale…

…Darwin published his theory of evolution with compelling evidence in his 1859 book On the Origin of Species, overcoming scientific rejection of earlier concepts of transmutation of species.[9][10] By the 1870s, the scientific community and a majority of the educated public had accepted evolution as a fact.

… Darwin has been described as one of the most influential figures in human history,[22]

He also got his very own UK banknote in 2000. It remained official tender for almost two decades until 2018.

To this day there still exist some who reject evolutionary biology. This is generally for religious reasons, they prefer to opt for older creation mythology. In one sense this is perhaps understandable. For many, religion is a human experience that rests upon a foundation that has deep emotional roots. Anything that threatens that safe haven will face resistance.

Darwin’s idea is now well-established with multiple lines of evidence. It does not simply rest upon his original writing, it has all come a long way since then. If curious to learn more, then start here at the Berkeley University 101 page …

If interested is arguing about this, perhaps by asserting that “God did it by Magic”, and that Darwin is a satanic plot, then please don’t engage me. Instead, write up your scientific “evidence” and publish it within a credible peer-review science journal. Your disagreement is not with me, but instead is with the entire scientific community and also every single credible educational establishment on the planet. Those are the people you need to persuade.

There have been attempts to do exactly this, but it has not exactly gone all that well. The handful of scientific papers that promote religious ideas under the banner of science tend not to survive any scrutiny. Here is a link to a posting I did on the topic about 8 years ago. Not much has happened since then to change this.

Darwins idea does not simply survive, but it thrives due to the overwhelming quantity of robust evidence. He opened our eyes and enabled us to truly begin to understand our origins and where we came from.

It really is not about science vs religion

For most humans, his profound evidence-based insight is accepted, and that holds true regardless of any specific religious cultural inheritance we might have. Individuals that do accept their religious cultural inheritance, but don’t advocate a literal interpretation, find that evolutionary biology does not conflict. Instead, it rests upon the thought “That is how God did it”.

For all of humanity, it grants an insight to how the diversity of life came about. Darwin’s remarkable insight persists and thrives because that is what all the available evidence tells us.

Perhaps the best way to mark today is to quote Darwin himself. I’ve selected several paragraphs that I find resonate with me …

It has often and confidently been asserted, that man’s origin can never be known: but ignorance more frequently begets confidence than does knowledge: it is those who know little, and not those who know much, who so positively assert that this or that problem will never be solved by science.

As man advances in civilisation, and small tribes are united into larger communities, the simplest reason would tell each individual that he ought to extend his social instincts and sympathies to all the members of the same nation, though personally unknown to him. This point being once reached, there is only an artificial barrier to prevent his sympathies extending to the men of all nations and races. If, indeed, such men are separated from him by great differences in appearance or habits, experience unfortunately shows us how long it is, before we look at them as our fellow-creatures. …

…This virtue, one of the noblest with which man is endowed, seems to arise incidentally from our sympathies becoming more tender and more widely diffused, until they are extended to all sentient beings. As soon as this virtue is honoured and practised by some few men, it spreads through instruction and example to the young, and eventually becomes incorporated in public opinion.

– The Descent of Man – volume I, chapter III: “Comparison of the Mental Powers of Man and the Lower Animals — continued”, pages 100-101

Since today is a day that marks his scientific contribution, he shall also have the last word here ….

There are Darwin day events happening all around the globe. You can click here to see if any are happening near you.