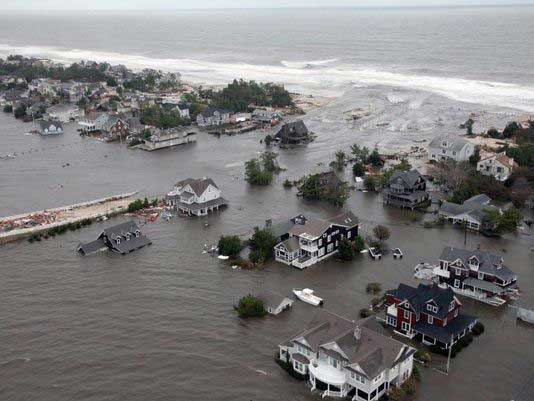 We know that sea level is rising, that has been well-established. In fact we know that the rate of that rise is accelerating, that has also been established. We also understand why sea level is rising. As global temperatures increase you not only have the rather obvious melting of land based ice taking place, but you also have thermal expansion in play.

There is a new study that reveals something new – specifically, how tides will impact climate. Nobody previously considered it and so this is interesting.

A new study that has been published within the Journal of Geophysical Research: Oceans is the result of a join effort between scientists at Bangor University, Harvard, and Oregon State Universities in the US, and McGill University in Canada.

Entitled “Global Tidal Impacts of Large-Scale Ice Sheet Collapses“, it lays out how the melting of the massive ice sheets covering Greenland and Antarctica ice sheets will impact us in a most unexpected way.

The key point is that as ice melts then not only would sea level changes vary spatially, but huge changes would occur with the distribution of tidal energy and so the location of tidal fronts would change. That in turn impacts ocean mixing and ocean currents.

Our current climate patterns are in many ways driven by the existence very large-scale ocean currents, for example the gulf stream. If you alter those, then rather obviously you also alter the prevailing climate patterns.

If we are going to predict the future climate (and also reconstruct past climate phases), then the models need to also factor in these tidal forces as well and how the altering of tidal fronts will impact it all.

We conclude that past and future changes in sea level have the potential not only to alter sea level variability (via the tides) but could also lead to important feedbacks in the climate system which could be superimposed on the variations discussed by Clark et al. (2016). We therefore suggest that parameterizations of tidal effects in climate models need to include and accurately represent the impacts of sea level changes on the tides. Our results also emphasize the need for high-resolution regional tide studies addressing local impacts of sea level changes on tides, better descriptions of the mechanisms behind these changes, and their feedbacks with different components of the climate system. Furthermore, such simulations should use global simulations as boundary forcing because the previously used arguments of limited back effects in the deep ocean may not hold

“Tides currently play a key role in sustaining the large-scale ocean currents which redistribute heat from the tropics to higher latitudes and are responsible for the mild climate in the UK. Predictions provided by the new model show that the collapse of the ice sheets will significantly impact the global tides which could in turn impact ocean current systems which are important for our climate.

The global changes in the tides will also have profound impacts on a wide range of other ocean functions, such as changes to the regions of the ocean which absorb carbon dioxide from the atmosphere, and on the ecosystems of the temperate (shallow) shelf seas surrounding the continents.”

– Lead author Dr Sophie-Berenice Wilmes, who was a PhD student at Bangor University

“The disappearance of the polar ice sheets in a warming climate would represent a profound change in the Earth system, and we are only just starting to understand the implications.”

“The new results highlight the importance of considering changes in the tides, due to changes in sea level in response to ice sheet loss, in predictions of future climate and reconstructions of past global climates.”

A full PDF of the published paper is available here online.