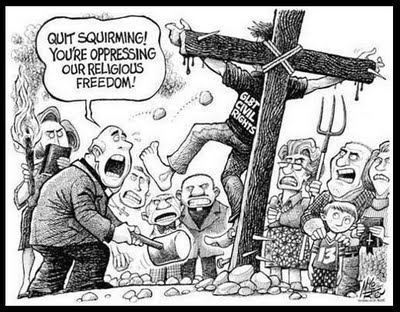 Yes, that is indeed correct, they really do believe that. Here for example is a Vox article that digs into that study …

It is quite frankly bizarre to grasp the depth of the disconnect here between reality and this persecution belief. Christianity is the dominant prevailing belief in the US. If you happen to be Black, Hispanic, Muslim, Atheist or Jewish, then the identification of white right-wing Christians as the most downtrodden persecuted group is not exactly an idea that you would buy into.

What do they mean by “Persecution”?

It is perhaps worth appreciating and understanding what some actually mean when they use the word “persecution”. For many entrenched within the right-wing evangelical community this is a word used to describe valid criticism of some of their truly obnoxious behaviour and that includes actual discrimination and actual persecution of others such as open hostility regarding same-sex marriage, reproductive rights, or the legal banning of people in specific places in the US from holding public office if they do not have a religious belief. It is also used to describe the belief not being permitted to hold a place of special privilege within the public square contrary to what the constitution actually says. For example, you don’t get to deploy religion in public schools or in politics without being challenged, and so this resistance plays to the narrative of some supposed persecution and intolerance.

Hint: Intolerance of special privilege is is not persecution.

Imagine any and every example of such “persecution” and substitute Islam for Christianity, then watch how quickly there is a retreat into neutrality within the public square.

Why is there a belief in Persecution?

There are basically two reasons.

The first is that the bible says so. Ms Tarico quotes numerous bible verses to illustrate this point, for example …

I am sending you out like sheep among wolves. Therefore be as shrewd as snakes and as innocent as doves. Be on your guard; you will be handed over to the local councils and be flogged in the synagogues. Matthew 10:16-17

Brother will betray brother to death, and a father his child; children will rebel against their parents and have them put to death. You will be hated by everyone because of me, but the one who stands firm to the end will be saved. When you are persecuted in one place, flee to another. Matthew 10:21-23

You must be on your guard. You will be handed over to the local councils and flogged in the synagogues. Mark 13:9

Blessed are you when people hate you, when they exclude you and insult you and reject your name as evil, because of the Son of Man. Luke 6:22

There are literally hundreds of more verses telling you that those that believe will be persecuted. If you drink all this in deeply each and every day, then you will believe it applies personally. If all around you are claiming “persecution” (which usually means somebody simply dared to not believe and instead criticised what was being said or done), then you will naturally lean towards the embrace of that narrative at an emotional level without really asking yourself if it is actually true.

There is also a second reason. Playing the victim does give you a distinct advantage. I recall once being caught doing something rather naughty in school by one of the staff (I was locking a teacher I did not like into her classroom). The immediate reaction was to drag me to the principles office. I played the victim card “they made me do it”, and it worked wonderfully. Instead of facing their wrath, I had triggered their sympathy and so all I faced was a bit of  a talking to.

Persecution beliefs do have consequences

When we cultivate the sense that we have been wronged, we can’t see the wrong that we ourselves are doing. We also give up our power to make things better. If people keep being mean to us through no fault of our own, then we’re helpless as well as victims, at least in our own minds. You can’t fix what you can’t see.

Indeed yes, when you perceive that criticism of your open hostility towards gay people is “persecution”, and resistance to imposing your religious belief upon everybody is apparently “persecution”, then what you will inevitably fail to grasp is that the real problem is you.