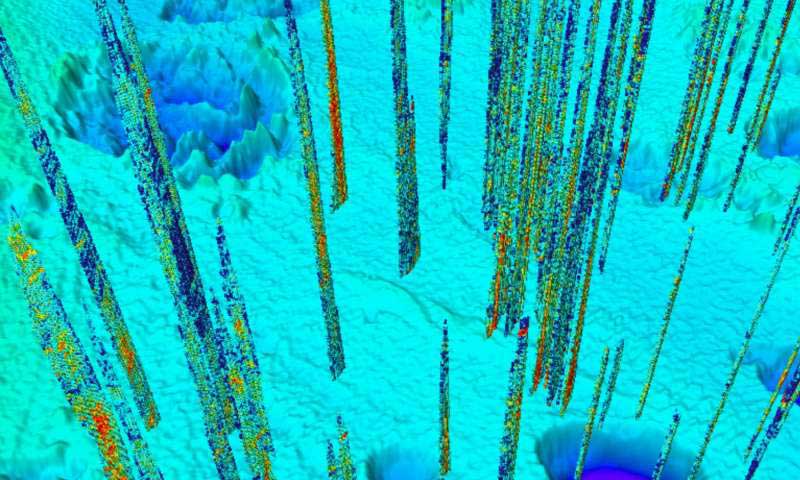 A new paper has been published that writes top the details of what happened as the glaciers retreated at the end of the last ice age.

Widespread methane release from thawing Arctic gas hydrates is a major concern, yet the processes, sources, and fluxes involved remain unconstrained. We present geophysical data documenting a cluster of kilometer-wide craters and mounds from the Barents Sea floor associated with large-scale methane expulsion. Combined with ice sheet/gas hydrate modeling, our results indicate that during glaciation, natural gas migrated from underlying hydrocarbon reservoirs and was sequestered extensively as subglacial gas hydrates. Upon ice sheet retreat, methane from this hydrate reservoir concentrated in massive mounds before being abruptly released to form craters. We propose that these processes were likely widespread across past glaciated petroleum provinces and that they also provide an analog for the potential future destabilization of subglacial gas hydrate reservoirs beneath contemporary ice sheets.

In other words, pay attention because this is not simply about what happened, it may also be about something that is going to happen.

Where does their data come from?

Littered across the floor of the Barents sea in the Arctic are kilometer-wide craters. These were formed roughly 15,000 years ago at the end of the last ice age when the huge ice sheet sitting on top melted. This release of pressure resulted in huge blow-outs that rapidly released vast amounts of both CO2 and also Methane into our atmosphere, and even today the craters are actively releasing methane.

What happened in the Barents Seafloor also appears to be taking place on Siberia’s Yamal Peninsula today. Over the last few decades, huge craters have been appearing. Researchers believe they are formed by thawing permafrost causing the buildup of methane below ground, eventually resulting in an explosive collapse.

Greenland and the Antarctic

Both Greenland and the Antarctic have vast ice sheets sitting on top of them today. Pop that cork and something similar may happen – namely the destabilization of the inferred gas-hydrate reservoirs that exist there.

“The crater area was covered by a thick ice sheet during the last ice age, much as West Antarctica is today. As climate warmed, and the ice sheet collapsed, enormous amounts of methane were abruptly released. This created massive craters that are still actively seeping methane “

“Our study provides the scientific community with a good past analogue for what may happen to future methane releases in front of contemporary, retreating ice sheets”

– Karin Andreassen, first author of the study and professor at CAGE Centre for Arctic Gas Hydrate, Environment and Climate.