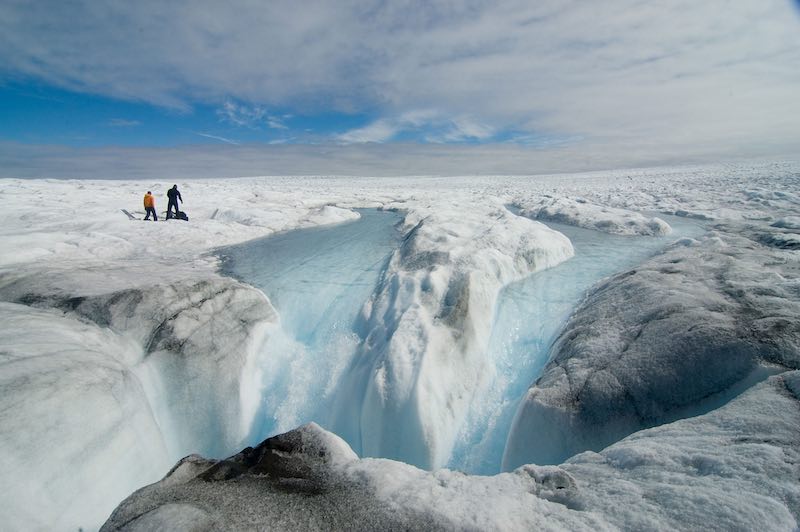 Reports of dramatic melt events in Greenland provoke different reactions. Some, (thankfully only a small number), sit back and observe, “It is summer, this is what happens in the summer“. Others respond more dramatically. During the last Democratic debate, long-shot candidate Andrew Yang urged people to move away from the coast because we are already doing too little to prevent catastrophic climate change and it is now too late. His precise words were …

Is this political theatre or should we take such concerns seriously?

What is Going on in Greenland?

This current melt season in Greenland has indeed been a dramatic one. Even prior to it National Geographic was writing last December (2018) about Greenland’s ‘unprecedented’ ice loss, and so what has happened this season is part of that ongoing dramatic warming trend …

For a few days in July of 2012, it was so hot in the Arctic that nearly the entire surface of the Greenland ice sheet turned to slush.

It was so uncharacteristically warm that scientists, emerging from their tents high on the peak of the ice sheet, sank up to their knees in the suddenly soft snow. And then, that snow started melting.

The melting was alarming, like nothing scientists had seen before. But no one knew exactly how unusual the event was or how worried to be. But now, scientists have figured out that the hot 2012 summer capped off 20 years of unprecedented increases in meltwater runoff from Greenland.

Since writing that we have been through one more melt season during this summer of 2019. So what has happened, was it a normal season, or was it something different?

If you have been paying attention, then you already know the answer.

Via the satellite data collected by NSIDC, this is what happened …

There is enough frozen ice in Greenland to raise sea level by as much as 7.4 meters. (the data for that comes from here), and so that brings us right back to moving away from the coast.

What is inevitable is that Greenland is going to melt over the coming centuries. Even if we stopped emitting CO2 and halted the current warming trend, we are already committed to this happening. A study published in 2017 concluded that Greenland’s peripheral glaciers and ice caps crossed an irreversible tipping point around 1997, and will continue to melt.

There are also disturbing discoveries that are only now being made. A recent CNN clip (20th August 2019) reports this …

…”It’s very rare anywhere on the planet to see 700 meters of no temperature variation, normally we find colder waters in the upper hundred meters or so, but right in front of the glacier it’s warm all the way up,” said Ian Fenty, climate scientist at NASA. “These warm waters now are able to be in direct contact with the ice over its entire face, supercharging the melting.”…

The short quick answer is that yes it is. Not only is sea level rising, but the rate at which sea level is rising is accelerating.

The current rate is 3.3 mm per year, and that translates to almost double the 20th century rate. Here is the current satellite generated data graphic…

What needs to also be appreciated to truly understand this is see it in the context of current projections. Below are the historical sea level reconstruction and projections up to 2100. This was published in January 2017 by the U.S. Global Change Research Program for the Fourth National Climate Assessment …

If you are truly not worried and simply dismiss the deep concerns being expressed, not just by politicians, but by the subject matter experts, the Climate Scientists, as unwarranted alarmism, then you simply do not grasp what is actually happening.

You might also wish to consider all of the above in the context of this recent Scientific American article (19th August 2019) ..

…the underwater melting that is driving disintegration of ice sheets and glaciers is occurring far faster than predicted by theory—as much as two orders of magnitude faster—throwing current model projections of sea level rise further in doubt.

…climate skeptics and deniers have often accused scientists of exaggerating the threat of climate change, but the evidence shows that not only have they not exaggerated, they have underestimated…

…scientists tend to underestimate the severity of threats and the rapidity with which they might unfold.