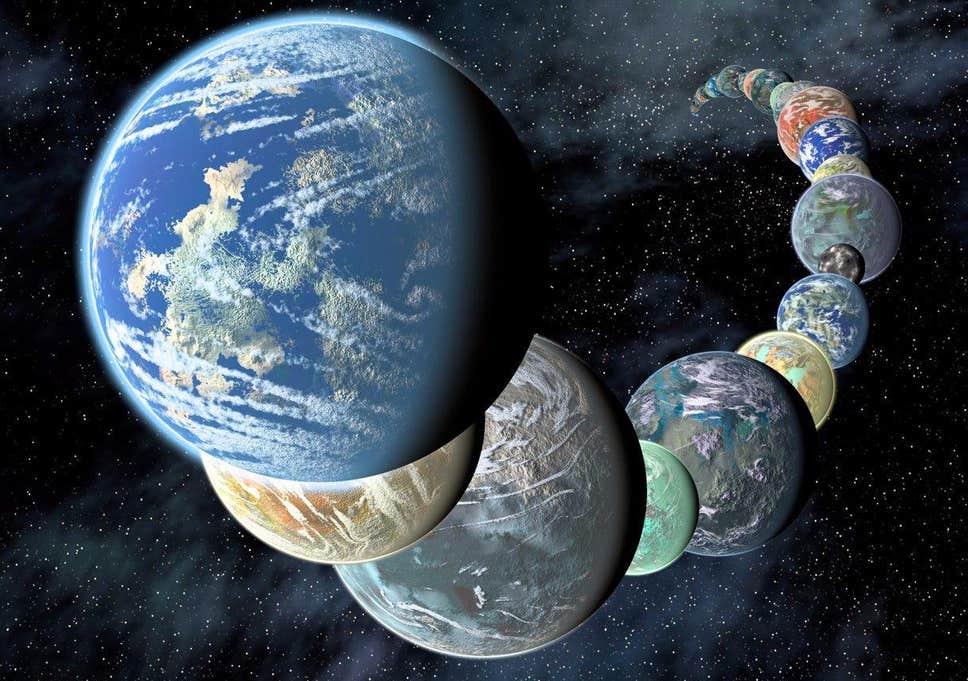 On 14th Aug 2019, a new paper was published in The Astronomical Journal that addresses the question of the quantity of earth like planets. Titled “Occurrence Rates of Planets Orbiting FGK Stars: Combining Kepler DR25, Gaia DR2, and Bayesian Inference” it attempts to answer the question. The abstract explains it as follows:

We characterize the occurrence rate of planets, ranging in size from 0.5 to 16 R ⊕, orbiting FGK stars with orbital periods from 0.5 to 500 days. Our analysis is based on results from the “DR25” catalog of planet candidates produced by NASA’s Kepler mission and stellar radii from Gaia “DR2.” We incorporate additional Kepler data products to accurately characterize the efficiency of planets being recognized as “threshold crossing events” by Kepler’s Transiting Planet Search pipeline and labeled as planet candidates by the robovetter. Using a hierarchical Bayesian model, we derive planet occurrence rates for a wide range of planet sizes and orbital periods.

They did what with what?

Let’s take this step by step.

First step is a quick primer on some of those terms.

“FGK stars“ – Most stars are currently classified under the Morgan-Keenan (MK) system using the letters O, B, A, F, G, K, and M, a sequence from the hottest (O type) to the coolest (M type). Our sun is G. The scope of their study included stars like our sun and also stars either side of that in the classification scale. (You can read more about Stellar Classifications here). Stellar Classification is all a tad more complicated that just a letter. Each letter class is then subdivided using a numeric digit with 0 being hottest and 9 being coolest (e.g. A8, A9, F0, and F1 form a sequence from hotter to cooler). There is also a luminosity class that is added to the spectral class using Roman numerals. Thus our sun is not simply G, but is G2V (a main-sequence star with a temperature around 5,800 K). To the right is a quick diagram illustrating it all.

“the “DR25” catalog“ – This is a reference to the Kepler Objects of Interest (KOI) Catalog, dara release version 25 – DR25. You can find it here. The catalog contains all the transit-like features across the full dataset of the original Kepler mission, i.e. Quarters 1 through 17, as found by the Kepler pipeline and vetted by the RoboVetter. Details on the nature and contents of the catalog can be found in the DR25 KOI Companion Document. The catalog was the first of its kind to be accompanied by a full suite of detection reliability and completeness measurements, and is the recommended catalog for estimating planet occurence rates

What is the study doing?

Great, so let’s dive in.

In 2009, NASA’s Kepler mission began its mission to characterize the abundance and diversity of exoplanets. This was basically 4 years of precise photometry of 189,516 target stars. One of the primary goals of the mission was to identify the frequency of Earth-size planets in or near the habitable zone of solar-like stars, but that has remained elusive. Due to the failure of Kepler’s reaction wheels considerable care is necessary when inferring the rate of small planets near the habitable zone from Kepler data.

There have been previous studies that attempted to utilise a hierarchical Bayesian model to determine the frequency of earth like planets. This new study is the first to make use of Kepler’s final planet catalog (known as DR25).

Note also that it is not simply DR25 being processed, but also the GAIA DR2 data as well. That latter data feed gives them a very precise measurement of the stars of interest and so brings a far greater degree of precision.

In essence, what they have done is to provide the most accurate estimate of the frequency that planets that are similar to Earth in size and in distance from their host star that orbit around stars similar to our Sun.

So what is the answer, how many earth like planets? – The Reveal

So are earth-like planets rare or common?

Here is their answer …

Translation: Planets that are three-quarters to one-and-a-half times the size of earth and orbit every 237-500 days most probably sit in orbit around roughly 1 out of every 4 sun-like stars.

The potential for life out there on other planets is staggering

No matter how you slice or dice this, the number of earth-like planets out there is (to use a phrase) quite literally astronomical.

One final observation – that 5 billion number is just for our galaxy alone. There are over 2 trillion other galaxies.