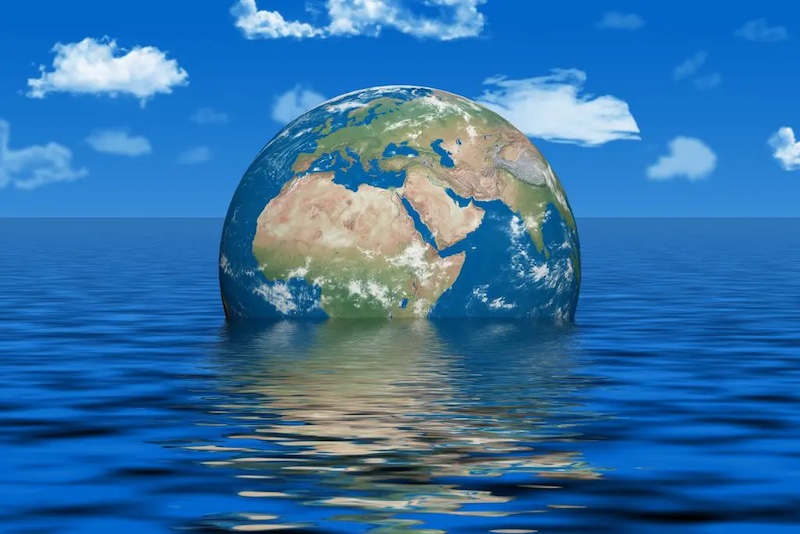 Climate researchers from the University of Copenhagen’s Niels Bohr Institute believe sea level rise could be as much as 1.35 metres by 2100. This is specific to the worst-case warming scenario.

They have published the details within a paper published in the journal Ocean Science, titled – “The transient sensitivity of sea level rise“

The following details consist of materials provided by the team at the Niels Bohr Institute.

There are two main elements to observe when assessing sea level rise. One is the loss of the ice on land, e.g., melting mountain glaciers and inland ice sheets on Greenland and Antarctica, and the other is that the sea will expand as it gets warmer. The more its temperature increases, the faster the sea will rise. Researchers at the Niels Bohr Institute, University of Copenhagen have constructed a new method of quantifying just how fast the sea will react to warming. The level of the sea is monitored meticulously, and we can compare the responsiveness in models with historical data. The comparison shows that former predictions of sea level have been too conservative, so the sea will likely rise more and faster than previously believed. The result is now published in the European Geosciences Union journal Ocean Science.

During the last 150 years, in what is called the industrial period, sea levels have been rising…

But 150 years is not very long, actually, because of the great inertia in the warming of the oceans and inland ice sheets, so several hundreds of years can pass before we see the full consequences of warming in the atmosphere. This is why we compare the observations with the results from the detailed computer models we use to depict a future scenario.

Among others, the climate panel of the United Nation’s Intergovernmental Panel on Climate Change (IPCC), has gathered these projections, made from a collection of many smaller models. These, in turn, have been validated, obviously, as well as can be done”.

The predictions used by the IPCC are based on a jigsaw puzzle of models for ice sheets, glaciers and the warming of the sea. The predictions suffer, however, from the fact that only a limited amount of data are sometimes available for the models to be tested on. There was practically no data on the melt-off rate for Antarctica before we had coverage from satellite observations in the 1990s.

“We have better historical data for the sea level rise in total, which, in principle, allows for a test of the combined puzzle of models. However, it has not been part of the routine to make sea level hindcasts at IPCC, so presently we are not able to tell if these models are capable of reproducing the historical sea level. At the Niels Bohr Institute, we have used this situation as our starting point, and so we observe how sensitive the models are in reacting to warming. We expect that if we compare observational data from the fairly short period of time from 1850 onwards with the sensitivity of the models, it should allow us to assess whether the models are realistic or not”,

Models do not match historical observations

The research team at the Niels Bohr Institute is hoping their method for validating future scenarios by looking into the past can gain a foothold in how sea level rise will be analysed in the future.

“Apparently, the models we are basing our predictions of sea level rise on presently are not sensitive enough. To put it plainly, they don’t hit the mark when we compare them to the rate of sea level rise we see when comparing future scenarios with observations going back in time”

”It is crucial for our faith in model based climate predictions that they are able to reproduce the realized climate as realistically as possible.

We hope this new comparison metric will be adopted to as large extent as is possible and can become a tool we can apply in comparing different models. A good example is that we don’t expect the sensitivity to be the same all the way back to the last millennium or several millions of years back in time, but the added understanding of how the sensitivity might change over time is something we can add to the comparisons between models and observations. Besides, we’d like to see the method applied to the individual processes contributing to sea level rise. This might make the understanding of the sensitivity even more detailed, we believe”.

Jens Hesselbjerg Christensen, Professor at the Ice, Climate and Geophysics Section at the Niels Bohr Institute and a co-author on the paper

“this article has two main messages:

1. The scenarios we see before us now regarding sea level rise are too conservative – the sea looks, using our method, to rise more than what is believed using the present method.

2. The other message is that research in this area can benefit from using our method to constrain sea level models in the scenarios in the future”.