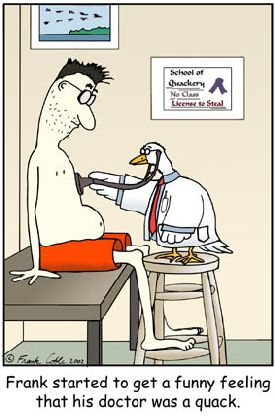 Brian Palmer has a great article over in slate all about the deployment of Reiki and reflexology as cancer cures.

Most treatments at U.S. cancer centers are evidence-based and cutting-edge. In recent years, however, some of our great temples of healing have begun to dabble in the unscientific and the prescientific. Integrative care centers at Memorial Sloan Kettering, the University of Arizona, and theUniversity of California­–San Francisco, to name just a few, offer a panel of unproven therapies, such as reiki, reflexology, and qigong. That’s right—the same institutions that can genetically modify your immune cells to fight leukemia also offer to replenish your life force energy through the laying on of hands.

Reiki is not some ancient art, but was instead dreamed up in 1922 in Japan and involves a reiki master waving his hands over the patient, scanning for problems, and then placing his hands on areas to be healed to supposedly transfer life-force energy to the patient, which will then supposedly promote recovery.

This basically involves applying pressure to the feet, hands, or ears with specific thumb, finger, and hand techniques. The belief is that there is a system of zones and reflex areas that reflects an image of the body on the feet and hands, and so you apply pressure with the premise that such work affects a physical change to the body.

Have you spotted a pattern here yet?

If curious to know just how weird this can all get then you might wish to check out the postings of David Gorski, an oncologist and vocal opponent of integrative care, because he has detailed some of the fantastic claims of reiki masters on his blog Science-Based Medicine.

Mr Palmer goes on to list some of the other forms of quackery that are also being promoted as cancer cures, and then raises a rather important observation …

You might ask whether integrative care should be subjected to the same rigorous standards applied to cancer drugs. That’s a fair point. Reiki and reflexology carry very little in the way of risk. Like hospital therapy dogs, they may brighten the day of a very sick person. But volunteers who parade dogs through pediatric wards don’t brag about their deep wisdom or ancient roots. It’s just fun to pet a dog.

To be honest, I would tend to take it a bit further, any treatment being promoted by a cancer clinic would quite naturally be assumed to perhaps offer some benefit, and yet the evidence is that these forms of quackery do nothing at all except offer false hope – and that to be quite frank is fraudulent. In any other commercial context, selling goods that do not match the description would result in fines or even jail time.

Imagine this, go to amazon, order some fantastic bit of technical kit, then a few days later a box arrives with some cheap alternative in it that does not actually work.

Would you would be OK with this?

Of course not, so why is this same scenario acceptable in the context of a cancer clinic?

1 thought on “Quackery and Cancer Care”