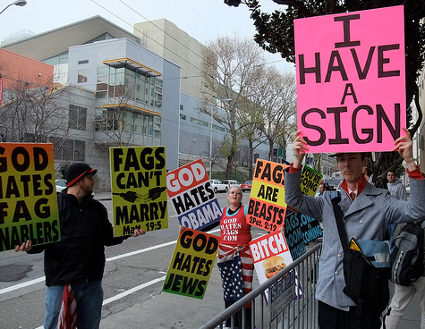 Status: False … the Twitter account @MargieJPhelps once really did belong to the daughter of the Rev. Fred Phelps Sr., but no, the tweets were created by @Grampscramps as satire

If you had previously seen the claim, then you  might indeed have been tempted to believe it, and that was because it was potentially believable for two reasons

So now that their founder is gone, what will happen to them?

They will slowly over time fade into obscurity. Beliefs go through a natural selection process: those that can successfully hook into the human mind (even the obnoxious variations) and offer a distinct advantage (meet lots of people and make friends as long as you buy into the belief) will thrive and grow, and those that can’t successfully compete against other more successful variations will eventually fade.

What is quite enticing about any specific belief is that you will generally find that the individuals within it are decent honourable people who do truly strive to live good lives. You will of course come across some truly obnoxious behaviour (Westboro Baptist), but most humans hold various bits of beliefs with different degrees of confidence and will generally pick the nice bits and then toss the rest, and that is how they usually handle such challenges.

Additionally, you will also find that those who believe, when faced with the obnoxious bits, will warmly assure you that such behaviour is not part of their specific variation and that “they” are not true Muslims, Christians (or whatever is in focus). This claim is not simply an excuse, they truly believe that, and will use this thought to rationalise things within their own mind, and retain the thought that only their specific variation (the apparently true one) is warm, fuzzy, loving and truly supernatural and perhaps the only one that is really true.

OK, so what is going on inside heads over at Westboro, because almost everything they do is obnoxious, how do they even begin to rationalise that?

Once you buy into an idea (or perhaps more accurately in the Westboro case, are born into it), that you have the maker of the entire universe on your side, then you can successfully rationalise almost anything as the high moral ground. You reside inside a bubble where everybody tells you it is true – in fact your entire social circle only consists of people who tell you it is true, so individuals end up truly believing that their obnoxious behaviour is the best thing to do and so they are tricked by the belief into the obnoxious behaviour. This is not a rational stance, but rather is an emotional bonding, and so no amount of logic or reason can shake the emotional conviction.

This social decoupling from reality in their instance is so at odds with the social normal, then it cannot be consistently sustained in everybody, hence many (if you will forgive the term) end up seeing the light and abandon the cult. The pressure to stick with it is clear, those that do leave are instantly shunned and told in no uncertain terms that they are giving themselves over to evil, and so that psychological trick is the mechanism that traps many inside and stops this entire sandcastle from rapidly crumbling. They are related, so to leave means being cut off by your family and being cast out and left completely alone … and yet despite that pressure, their behaviour is so vile, that many do bravely take that step, and are to be applauded for doing so.

Finally, there is one other rather important observation – a belief that is quite successful does not in any way verify that it is actually true at all, reality is not something we get to vote about. Clearly The Westboro belief is factually wrong, not just because it inspires obnoxious behaviour, but because there is exactly zero evidence for their claims. Turn that coin over and you will find billions who all do indeed truly believe in Allah or Jesus and behave decently (mostly), but that good behaviour does not verify the belief is actually true, only evidence can do that, and none of them actually have any credible evidence at all.

In many ways the very best approach when dealing with Westboro is not to go out and yell at them, but is instead satire and parody … here are a couple of examples. 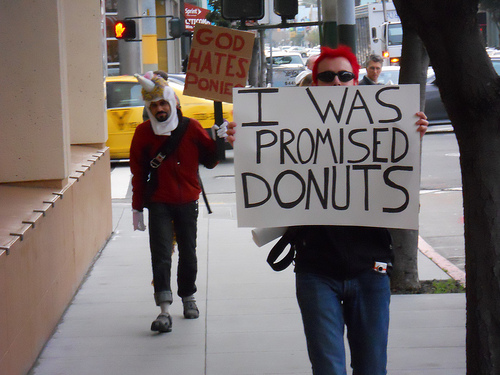 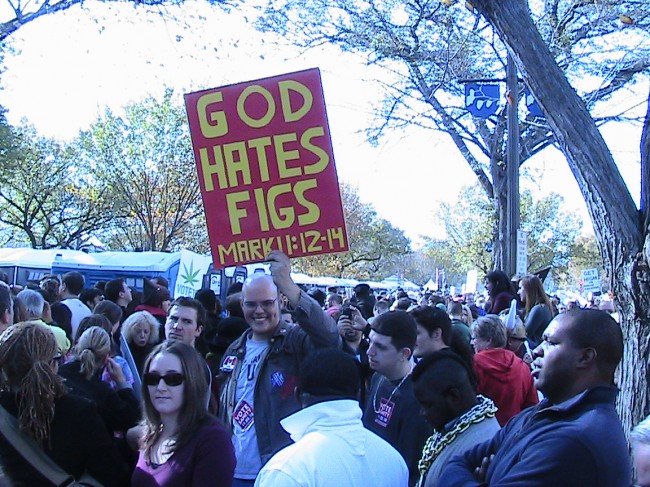