A rather common meta-pattern in human thinking rolls like this, “I do not understand X, therefore Y”, for example

… and of immediate specific interest …

For that last one there is a thriving industry of books led today by folks such as Graham Hancock, who perhaps simply took the role as leading pseudoscientific woo-meister from predecessors such as Erich von Däniken. Mr Däniken’s claim to fame is his rather infamous Chariots of the Gods? , a book that is based on faulty, pseudoscientific evidence, some of which was later demonstrated to be fraudulent or fabricated.

As a teen I used to vigorously lap up all this stuff and wallowed in every crazy whack-o-loon ancient alien idea going, but luckily managed to grow out of it all. Sadly some never do, and instead sink deeper into this morass of nonsense on steroids, but it may perhaps be understandable from one viewpoint – the idea of mysterious ancient aliens does indeed tickle the human mind, and so with this ready market of the gullible (specifically me as a teen), many rogues are more than willing to step in and make a quick buck.

Anyway, we have some fascinating news (for those that in interested in finding out what really happened), Phys Org reports …

Physicists from the FOM Foundation and the University of Amsterdam have discovered that the ancient Egyptians used a clever trick to make it easier to transport heavy pyramid stones by sledge. The Egyptians moistened the sand over which the sledge moved. By using the right quantity of water they could halve the number of workers needed.

In other words, no aliens required. Instead we have a rather simple bit of basic technology in play here – water. What the physicists did was to place a sledge in a tray of sand then examined the required pulling force and the stiffness of the sand as a function of the quantity of water in the sand. This revealed that the required pulling force decreased proportional to the stiffness of the sand because capillary bridges arise when water is added to the sand.

What does that mean?

Basically small water droplets bind the sand grains together, and so if you get the right proportions then it is about twice as stiff as dry sand and enables a sledge to glide far more easily because the sand does not pile up in front of the sledge as it does in the case of dry sand. 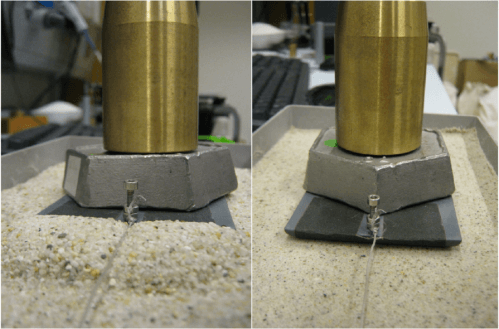 Well yes, that may be true, but is that what the Egyptians actually did, is there any evidence that they knew all this?

Yes there is indeed, here below is a wall painting from the tomb of Djehutihotep. It in we can clearly see a person standing on the front of the pulled sledge and pouring water over the sand just in front of it.

So there you go then, no aliens or gods required, just smart humans.