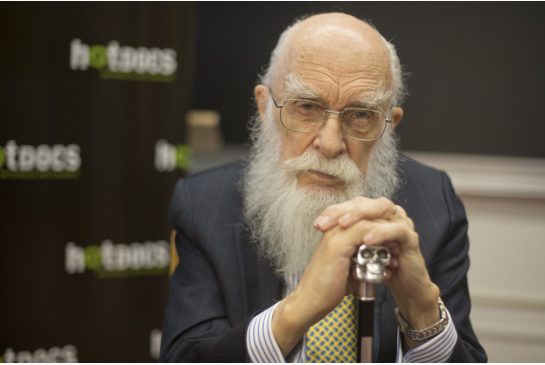 “He saw me as a mentalist — that is, a magician with apparent ESP powers,” Randi says. “I think (he) knew I was a faker, but he wrote the article and it was very sympathetic. I got a couple good headlines out of it.”

That was the only time Randi claimed to be anything more than a simple trickster: “Never in front of audiences would I have said I had mystical powers,” he says.

That early experience is part of the reason Randi decided to expose psychics, who he saw as taking advantage of the naïve public. The battles were waged on television, and he was a regular debunker on the Johnny Carson show.

His most prolificThat same vitriol was extended to Peter Popoff, an American televangelist who claimed to heal worshippers of illness through divine intervention in the 1980s. Using radio surveillance, Randi proved the preacher was, in fact, taking instructions from a little receiver in his ear. target was Uri Geller, an Israeli mystic who claimed to move instruments with his mind.

Randi and Geller had spats through back-and-forth TV appearances. Geller would perform a trick for, say, Barbara Walters, and Randi would later repeat it to demonstrate how he pulled it off.

Randi became the worst kind of enemy; he’s a stickler, one who refuses to back down from his principles. In 1982 he wrote an exposé on Geller’s trickery, The Truth About Uri Geller, one of his 11 books demystifying magic.

It’s a nice article, you should go read it all.

OK yes, I’m a fan, but then this is the guy who took down the fraudulent TV Evangelist Peter Popoff by catching him using tricks for his supposed miracles, so of course I’m a fan.