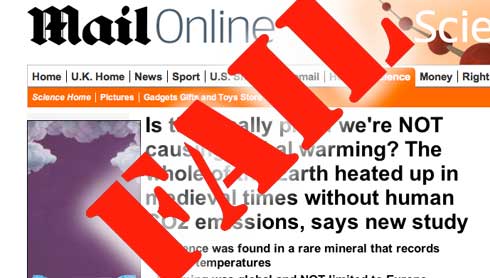 Yes, I’ve been banging on about the Daily Mail a bit, or to be a tad more precise, I have the two following posts …

So why an Update?

A couple of reasons, but perhaps principally it has been the article within the Guardian by Dana Nuccitelli, an environmental scientist and risk assessor, on the long history of David Rose’s climate focused Daily Mail articles that promote unscientific and non-factual views.

Firstly, regarding the article by Mr Rose regarding the claim that NOAA fudged the data in a study – his one and only source was John J Bates who worked for NOAA. The specific update here is that Mr Bates himself has rejected the assertions made by Mr Rose. Dana highlights this rather key point as follows …

On February 5th, Rose ran a story alleging scandalous behavior by NOAA scientists in a 2015 paper. The story was based on an interview with retired NOAA scientist John Bates, who was not involved in the study. However, in follow-up interviews with real science journalists, Bates clarified that he was in no way disputing the quality or accuracy of the data, even going as far as to make this damning comment:

I knew people would misuse this. But you can’t control other people.

Most importantly, the scientific integrity of the NOAA data is indisputable. The organization’s global temperature data is nearly identical to that of other scientific groups like NASA, the Hadley Centre, and Berkeley Earth.

NOAA's new record is around the middle of the pack w.r.t. other independent groups. Their old record was running a bit cold. @DavidRoseUK pic.twitter.com/Grc8W1KJfx

So how has Mr Rose responded to it all?

Journalists can and do make mistakes, it happens all the time. If faced with clear decisive evidence that a mistake has been made then you would anticipate perhaps a correction or simply regret about getting it wrong.

This however is what has actually happened …

David Rose’s sensationalist story claiming that “world leaders were duped into investing billions over manipulated global warming data” was entirely without scientific merit. It was a giant nothingburger, or as NASA GISS director Gavin Schmidt called it, “a NOAA-thing burger.”

So after a week full of rebuking and debunking from climate science experts and real science journalists, and after Rose’s own source walked back his criticismsand explicitly said there was “no data tampering, no data changing, nothing malicious,” how did Rose respond? Like any good propagandist, he doubled down.

In his follow-up piece, Rose’s “smoking gun” is that NOAA published its updated ocean temperature data 5 months later than it could have, to coincide with the 2015 global temperature data paper that incorporated it. This is a smoking gun because … well, it’s not. It’s another pedantic critique trying desperately to make a mountain out of less than a molehill. The few quasi-scientific points in Rose’s new piece are patently false.

There is a long history of Myth-information here

One key observation is painted in big bold letters by Dana within his article. I had not fully appreciated that Mr Rose has a long history of promoting climate myths within the Daily Mail. I was aware that he had written similar pieces before, but had not paid too much attention at the time to just how wrong it all was …

in 2013 he wrote that because there was more sea ice in the Arctic that summer than the previous year, this was somehow indicative of “global COOLING!”. In reality, about three-quarters of the summer Arctic sea ice has disappeared in less than four decades due to rapid global warming.

This past November, Rose tried to blame the record-shattering hot global temperatures of 2016 on El Niño in a piece that the climate scientists at Climate Feedback gave a “very low” scientific credibility score of -1.9. The lowest possible score is -2.0. The scientists described Rose’s article as “incredibly misleading,” “flawed to perfection,” “deceptive,” and “completely bogus.” One expressed dismay that they couldn’t rate its credibility worse than “very low.” When it comes to getting science wrong, David Rose goes to 11.

Real climate scientists Richard Betts, Tamsin Edwards, Doug McNeall, and Ed Hawkins took a look at the output generated by Mr Rose. As a response they did not just roll their eyes, but also had a bit of fun correcting it …

… and sadly that whooshing sound you just heard was the correction flying right over his head.

What does Mr Rose actually think about Climate Change?

It would perhaps be tempting to think that Mr Rose has no real interest in what is actually true and instead happily churns out deliberate propaganda in exchange for an income, but I’m not convinced this is the case.

He is, as a journalist who is quite passionate about specific things such as human rights, miscarriages of justice, the death penalty, racism, and the war on terror. Some of his writing on that is evidence based and is backed up by facts, and yet not all of it was. When he got it wrong he happily admitted it was indeed wrong, and yes it was wrong in a most spectacular manner, one that had dire consequences  …

he was also reporting spurious claims of connections between the Iraqi regime of Saddam Hussein and the Islamic terrorist group.[12] In addition to investigative pieces linking the Iraqi dictator to the 2001 anthrax attacks, Rose conducted interviews with alleged defectors, presented to him by the Iraqi National Congress, who described how Saddam’s elite commandos had trained the hijackers at a top secret Salman Pak facility south of Baghdad.[13] Rose later wrote that he had been duped, and expressed his bitter regret, in an interview with John Pilger for Pilger’s documentary The War You Don’t See (2010).[14][15]

So when it comes to climate change where does he actually stand?

I believe the world IS warming, and that carbon dioxide produced by mankind IS a greenhouse gas, and IS partly responsible for higher temperatures – and have repeatedly said so.

I do believe we should invest in new ways of generating energy, and I hate belching smoke stacks and vast open-cast coal mines as much as anyone who cares about the environment.

I also think that the imminence of the threat posed by global warming has been exaggerated – chiefly because the grimmer computer projections haven’t been reflected by what’s been happening recently to temperatures in the real world.

… and that stance is simply wrong, the predictions by the computer models have been, and continue to be proven right. It is an outright myth that the data models are not accurate, and this is easily verified.

But I also think current ‘renewable’ sources such as wind and ‘biomass’ are ruinously expensive and totally futile. They will never be able to achieve their stated goal of slowing the rate of warming and are not worth the billions being paid by UK consumers to subsidise them.

… and once again this is not factual. It might indeed have once been more expensive, but costs have been rapidly dropping. In many countries renewables now undercuts every other source of new generating capacity, sometimes by very considerable margins. Last year saw unsubsidized price records of $30 per megawatt-hour for a wind farm in Morocco and $29.10 for a solar plant in Chile. These must be the lowest electricity prices, for any new project, of any technology, anywhere in the world, ever. And we are still going to see further falls in equipment prices.

The fundamental problem is that time after time after time, again and again, each and every time he writes on this topic he is consistently and persistently wrong. Each time he is robustly debunked with evidence, and yet his emotional commitment to the idea persists and thrives to once again pop up and do more serious damage.

His stance on NOAA was a rather blatant bit of paranoid conspiracy fodder … NOAA apparently fudged the numbers to dupe world leaders into spending billions on renewables … er, no, just no, and as is now well-established, not even his source accepts this crazy idea, and nor are the NOAA numbers in any way at odds with other independent sources, it is all simply nonsense. Sadly dangerous nonsense that was picked up and promoted by the movers are shakers in the new US administration as one more bit of evidence to justify gutting and de-funding NASA and NOAA climate analysis.

Mr Rose was wrong about Iraq and that stance had consequences, and he is wrong once again about climate, and that also has consequences.

This stuff that he writes appears within the Daily Mail because they simply do not give a toss about fact checking or credibility.

One thing is certain, Mr Rose is quite sincere, he really believe in his conspiracy, but another empirically verifiable observation is that he is also sincerely and persistently wrong when he writes almost anything about Climate Change.