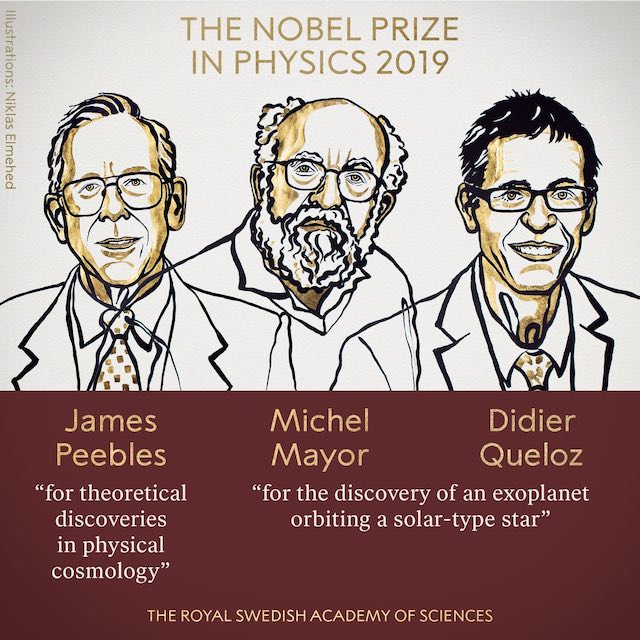 Physics is the one prize that perhaps attracts the most attention. One inescapable fact is that many past winners are still well-known and well-recognised names …Pierre and Marie Curie, Marconi, Planck, Einstein, Bohr, Hertz, Schrödinger, Fermi, Pauli, Bothe, Feynman, etc…

Perhaps the most well-known winner is Marie Curie. She received the Physics Prize in 1903 for her work on radioactivity. Amazingly, she also went on to win a second Nobel Prize in 1911, the Chemistry Prize, for the isolation of pure radium. She is the only human to ever receive two Nobel prizes in two different sciences. The Curie ability to attract Nobel’s is not just Marie, Her husband, Pierre Curie, shared the 1903 Physics prize with her. Their daughter, Irène Joliot-Curie, received the Chemistry Prize in 1935 together with her husband Frédéric Joliot-Curie. In addition, the husband of Marie Curie’s second daughter, Henry Labouisse, was the director of UNICEF when he accepted the Nobel Peace Prize in 1965 on that organisation’s behalf.

“for theoretical discoveries in physical cosmology”

“for the discovery of an exoplanet orbiting a solar-type star”

New perspectives on our place in the universe

This year’s Nobel Prize in Physics rewards new understanding of the universe’s structure and history, and the first discovery of a planet orbiting a solar-type star outside our solar system.

James Peebles’ insights into physical cosmology have enriched the entire field of research and laid a foundation for the transformation of cosmology over the last fifty years, from speculation to science. His theoretical framework, developed since the mid-1960s, is the basis of our contemporary ideas about the universe.

The Big Bang model describes the universe from its very first moments, almost 14 billion years ago, when it was extremely hot and dense. Since then, the universe has been expanding, becoming larger and colder. Barely 400,000 years after the Big Bang, the universe became transparent and light rays were able to travel through space. Even today, this ancient radiation is all around us and, coded into it, many of the universe’s secrets are hiding. Using his theoretical tools and calculations, James Peebles was able to interpret these traces from the infancy of the universe and discover new physical processes.

The results showed us a universe in which just five per cent of its content is known, the matter which constitutes stars, planets, trees – and us. The rest, 95 per cent, is unknown dark matter and dark energy. This is a mystery and a challenge to modern physics.

In October 1995, Michel Mayor and Didier Queloz announced the first discovery of a planet outside our solar system, an exoplanet, orbiting a solar-type star in our home galaxy, the Milky Way. At the Haute-Provence Observatory in southern France, using custom-made instruments, they were able to see planet 51 Pegasi b, a gaseous ball comparable with the solar system’s biggest gas giant, Jupiter.

This discovery started a revolution in astronomy and over 4,000 exoplanets have since been found in the Milky Way. Strange new worlds are still being discovered, with an incredible wealth of sizes, forms and orbits. They challenge our preconceived ideas about planetary systems and are forcing scientists to revise their theories of the physical processes behind the origins of planets. With numerous projects planned to start searching for exoplanets, we may eventually find an answer to the eternal question of whether other life is out there.

This year’s Laureates have transformed our ideas about the cosmos. While James Peebles’ theoretical discoveries contributed to our understanding of how the universe evolved after the Big Bang, Michel Mayor and Didier Queloz explored our cosmic neighbourhoods on the hunt for unknown planets. Their discoveries have forever changed our conceptions of the world.