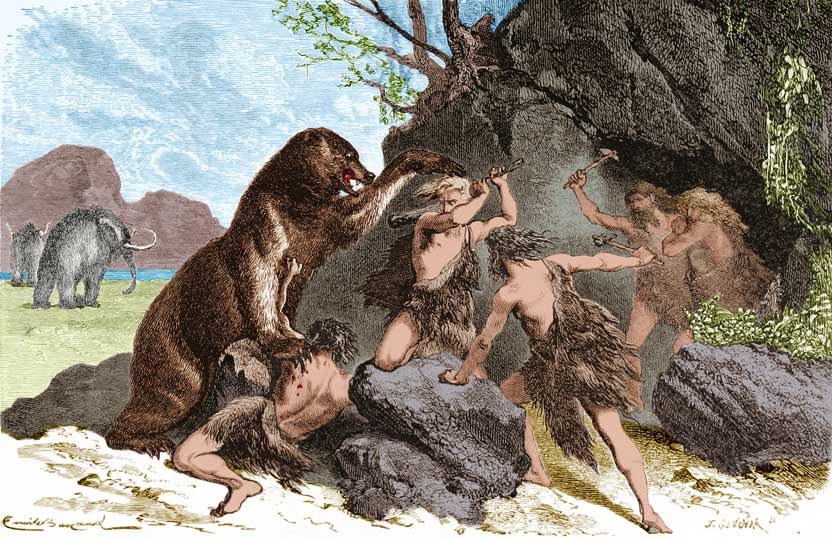 Mammal extinction is not simply something from the dim and distant past. In 1680 Sir Ewen Cameron killed the last Scottish Wolf in Killiecrankie (Perthshire). In 1786, the last wolf was killed in Ireland.

So what other mammals once existed in the British Isles and when did they go extinct?

Where did they all go, was it perhaps climate change that did them all in?

There is a new study that presents evidence pointing towards the cause of their demise being us.

Published in Science and entitled “Body size downgrading of mammals over the late Quaternary“, it reveals that we have been slaughtering large mammals for quite some time.

Since the late Pleistocene, large-bodied mammals have been extirpated from much of Earth. Although all habitable continents once harbored giant mammals, the few remaining species are largely confined to Africa. This decline is coincident with the global expansion of hominins over the late Quaternary.

Here, we quantify mammalian extinction selectivity, continental body size distributions, and taxonomic diversity over five time periods spanning the past 125,000 years and stretching approximately 200 years into the future. We demonstrate that size-selective extinction was already under way in the oldest interval and occurred on all continents, within all trophic modes, and across all time intervals. Moreover, the degree of selectivity was unprecedented in 65 million years of mammalian evolution. The distinctive selectivity signature implicates hominin activity as a primary driver of taxonomic losses and ecosystem homogenization. Because megafauna have a disproportionate influence on ecosystem structure and function, past and present body size downgrading is reshaping Earth’s biosphere.

In other words, the drastic decline of large mammals correlates with the spread of smart hominins.

The current biodiversity crises is not new, we have a long history here. What is happening today is simply an acceleration of an ongoing long-term trend.

A striking feature of the Pleistocene was the abundance and diversity of extremely large mammals. This is well illustrated by presence of mammoths, giant ground sloths, wooly rhinoceros, and sabretooth tigers on all habitable continents. The debate regarding our role is the extinction of all of these has been going on for some time and the suggestion that we did it has been controversial. This study adds new data to that debate.

I’ve pulled a few highlights out of the study by distilling away all the technical details.

Was it Perhaps Climate Change?

climate change did not increase extinction risk for large-bodied mammals before the spread of hominins. We found no relationship between temperature change over the Cenozoic and size bias of extinction; neither small nor large mammals were more vulnerable to extinction during times of high climate variability

Was it really us?

Why was Africa different?

About 125,000 years ago the body size distributions of mammals was related to the size of the landmass. In general the largest average or maximum body mass would be expected on Eurasia, followed by Africa, then North and South America, and the smallest on Australia.

But Africa was different, it did not fit into that curve. Instead the average size of large mammals in Africa was about 50% less that in the Americas or Eurasia.

Because the smart apes were there …

So what happened in the Americas and Eurasia?

Over the following ~100 ka, mean body mass dropped dramatically—first by 50% in Eurasia, and then by an order of magnitude in Australia—while remaining largely unchanged in the Americas until the terminal Pleistocene. Thus, for most of the late Quaternary, mean and maximum body masses were larger in the Americas than elsewhere—a pattern largely exceptional in the mammalian fossil record. By the terminal Pleistocene, other hominin species were extinct, and the remaining H. sapiens had developed efficient long-range weapons. The latter likely contributed to the severity of the extinction in the New World, with 11.5 and 9.7% of nonvolant terrestrial species lost in North and South America, respectively.

Where does this long-term ongoing trend lead to?

If all the species currently at risk of extinction are wiped out then we will have eliminated about 53% of the mammals compared to the diversity that thrived 125,000 years ago.

Meanwhile the average size of mammals will also have continued to shrink, and the largest mammal on the planet will most probably be the cow.

This is a huge disruption to vertebrates. The last time something similar happened was about 66 million years ago when the end-Cretaceous mass extinction happened.

Beyond the above study, the Washington Post along with various others have published an article yesterday about Fossil footprints ‘unique in the world’ showing a human chasing a giant sloth. …

…humans were readying for a kill. Given the position of the claw and knuckle marks, the sloth may have reared up to unleash “the equivalent of a ‘Go away!’ roar,” Bennett said. Another line of toe prints suggests a second person approached the sloth at an angle. Perhaps that person was a hunter about to deliver a surprise lethal blow, Bennett said. (This interpretation, he admitted, leans toward “paleo-poetry.”)

We left our fingerprints, or to be a tad more precise, footprints, as a literal trail of evidence that we did it.