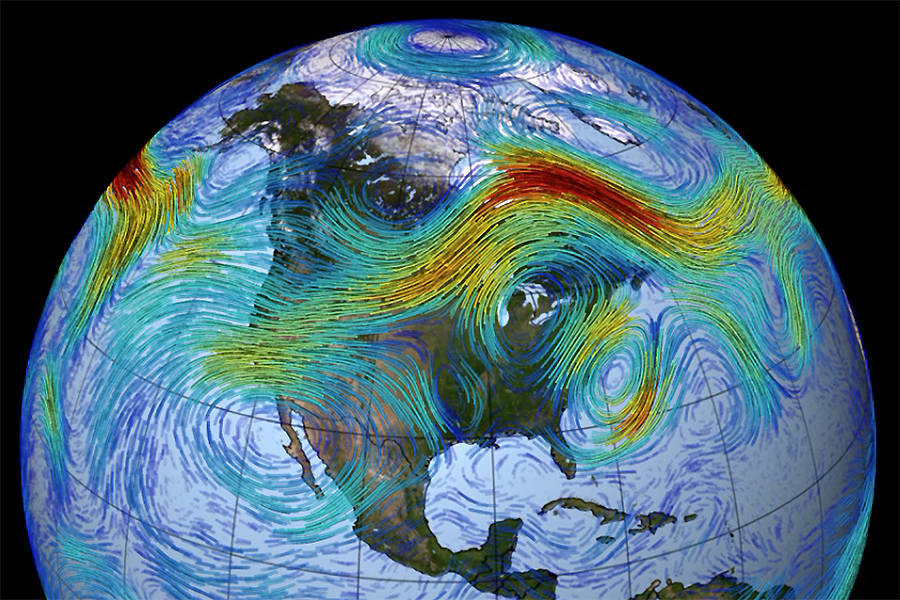 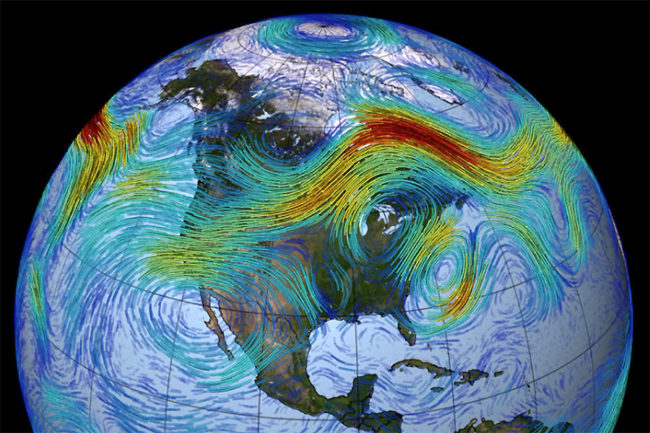 Freak weather has perhaps always been an aspect of weather, and yet the freakiness of the weather is clearly becoming a tad more common. To be specific droughts, floods and heatwaves are becoming more common.

The answer rests with the behaviour of the jet streams.

Circling the globe are rivers of wind that are commonly known as jet streams.

Jet Streams are located near the altitude of the tropopause (30,000-50,000ft) and are westerly winds (flowing west to east). Their paths typically have a meandering shape. Both hemispheres have a polar one (the strongest) and also a a subtropical jet.

What creates these rivers of wind?

The sun heats the atmosphere. This results in circulation cells. But the earth also rotates, and so the Coriolis force comes into play. The jet streams are the boundaries between these cells. 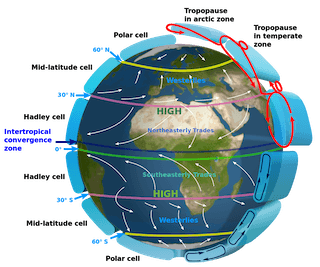 In reality the actual paths have a meandering shape as can be seen from the picture at the top of this article.

There is a new Study

Published in Science Advances on 31st Oct 2018, and titled “Projected changes in persistent extreme summer weather events: The role of quasi-resonant amplification“, it explains how global warming is disrupting the normal jet stream variations and is making them behave in very weird ways.

Side Note: The lead author is Michael E Mann. He is perhaps one of the most well-known climatologists.

The essence of it all is this. Faster warming of the Arctic leads to the jet stream twisting into an extreme pattern. That in turn leads to weather extremes of heatwaves and droughts.

There was one other big surprise from the study – aerosols. These are microscopic solid or liquid particles from industry, agriculture, volcanoes and plants. These apparently dampen down the jet steam distortions.

As these decrease, as we get our act together, the jet steam variations will increase.

Some further details from the study

What symptoms do we experience because of this?

A series of persistent, extreme, and costly summer weather events over the past decade and a half, including the 2003 European heat wave, 2010 Pakistan flood/Russian heat wave, 2011 Texas drought, 2013 European floods, 2015 California wildfires, and 2016 Alberta wildfires.

This led led to an ongoing discussion in the scientific literature regarding the relationship between anthropogenic climate change and warm-season weather extremes.

Some had an obvious cause. Global warming leads to higher temperatures, hence more heat waves, and also more floods because increased atmospheric temperatures enabled more moisture to be transported. However, there is also a growing realisation that the amplified jet stream variation plays a role and enables extreme weather to persist.

The paper describes what they term “quasi-resonant amplification” (QRA).

These QRA events produce extreme summer weather when the jet stream exhibits broad north-south meanders and becomes stationary with the peaks and troughs locked in place.

“Most stationary jet stream disturbances will dissipate over time,” said Michael Mann, distinguished professor of atmospheric science and director of the Earth System Science Center. “However, under certain circumstances the wave disturbance is effectively constrained by an atmospheric wave guide, something similar to the way a coaxial cable guides a television signal. Disturbances then cannot easily dissipate and very large amplitude swings in the jet stream north and south can remain in place as it rounds the globe.”

“If the same weather persists for weeks on end in one region, then sunny days can turn into a serious heat wave and drought, and lasting rains can lead to flooding,” said Stefan Rahmstorf, Potsdam Institute for Climate Impact Research (PIK), Germany.

What conclusions have they reached?

The analysis they have presented indicates that anthropogenic warming will likely lead to future increases in these QVA events under business-as-usual burning of fossil fuels. How substantial those increases are, and the historical path they follow—particularly during the first half of the 21st century—depends substantially on the prominence of midlatitude warming arising from decreasing aerosols.

Does that mean things will get worse?

Any evaluation of risk should take into account not only the mean expected increase (~50%) in events but also the possibility of a far larger (i.e., roughly tripling) number of events, as suggested by some of the model simulations.

Penn State University have also published a video at the same time the study was published. It is just 2 mins in which Michael E Mann, the lead author, explains it all …

His point is this. The future is still very much in our hands when it comes to dangerous and damaging summer weather extremes. It’s simply a matter of our willpower to transition quickly from fossil fuels to renewable energy.

A new study suggests that "quasi-resonant amplification” in the jet stream could lead to more extreme weather.

That’s some complex terminology. @bberwyn explains what it all means here:https://t.co/leH3UhCFh2

Study: Freak summer weather and wild jet stream patterns are on the rise due to global warming https://t.co/gav3ziNCYr

How does a warmer Arctic disrupt the jet stream and lead to more extreme weather? https://t.co/NW7BkfSWa6 pic.twitter.com/yigPy4pwXE