Exactly how much Melting Ice occurred in Greenland during the summer of 2015?

Let’s start with what has been measured so far this year. If we asked the question, “exactly how much Melting ice occurred during the summer season?”

If do we know, was it average, above average (but within the normal range), or was it something else?

The National Snow and Ice Data Center have been measuring over the years, and so here (as of 11th Nov) is a summary of the precise measurements for 2015 … 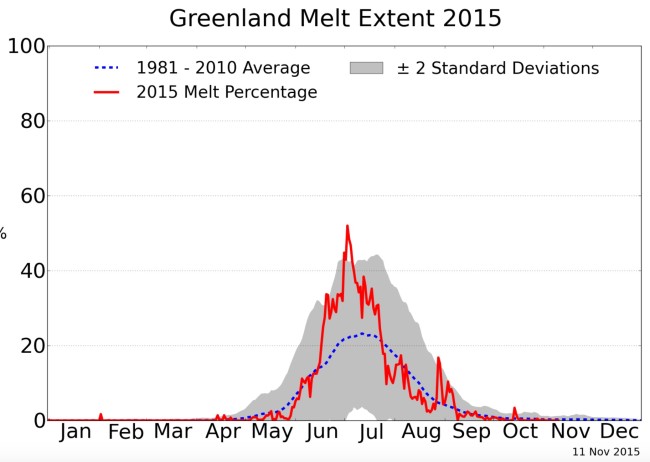 Clearly it has indeed been above average.

Do we observe sea level rising each and every year?

We might quibble about the various seasonal variations, and perhaps be faced with arguments that suggest that when ice melts in one location, it builds up in another; for example the claim that less Arctic ice results in more ice in Antarctica; but if we are in reality living on a warming planet and as a result are losing ice, then there is one clear measurement that will confirm that is sea level – or to be a tad more precise, do we observe and measure it rising?

Short answer, yes we do …

… and it is not rising at a constant rate, but is rising at an accelerating rate. 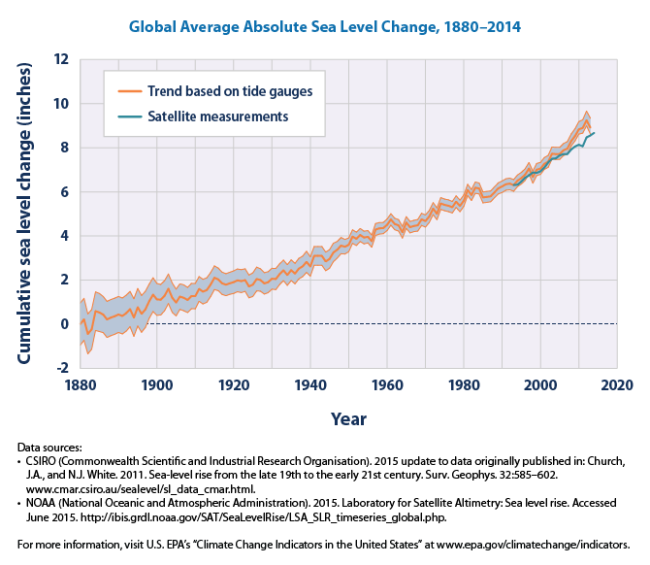 What happens if all the ice melts, how high will sea level reach?

Let’s break this up into two parts.

First let’s ignore all the ice in the Arctic. That floats on the ocean and so if it melts, will not greatly contribute to sea-level rise. This then leaves us with just two locations to consider … Greenland, and also the Antarctic. If all that land based ice melts, then exactly how high will sea level rise?

There is a heck of a lot of ice in Greenland, and so if that all melted then sea level would rise by …

… and if all the ice in Antarctica melted, well that is a far greater volume of ice, and so if that went, we would see a sea level rise of  …

Now for a quick sanity check : it will not happen in our lifetime.

Since we do know that ice is melting and that sea level is rising, so what are the current projections?

The short summary is that if we do nothing, then by 2100 sea level may perhaps be as much as 1m higher (that ‘m’ is for meter, not millimetre). The slightly longer version is this …

The Intergovernmental Panel on Climate Change (2007)[1] projected sea level would reach 0.18 to 0.59 m above present by the end of the 21st century but lacked an estimate of ice flow dynamics calving. Calving was added by Pfeffer et al. (2008)[2] indicating 0.8 to 2 m of SLR by 2100 (favouring the low end of this range). Rahmstorf (2007)[3] estimated SLR will reach 0.5 to 1.4 m by the end of the century. Pielke (2008)[4] points out that observed SLR has exceeded the best case projections thus far. These approximations and others indicate that global mean SLR may reach 1 m by the end of this century. However, sea level is highly variable and planners considering local impacts must take this variability into account.

Actually, this has all been a tad simplistic, there are other complications here. If, for example, you warm water, it expands, and so if you have no ice covering the Arctic, then the sun can heat the Arctic ocean, and the water will expand … but the IPCC calculations do take this into account.

Would you believe that all of the above was simply background to place the latest news in context for you so that you can make sense of it. A very nice summary is found in a Washington Post article …

… In a new paper in Science, Jeremie Mouginot of the University of California-Irvine and his colleagues find that the ocean-based glacier, which contains 0.5 meters or a foot and a half of potential sea level rise, has begun a rapid retreat, especially since 2012. The glacier has lost fully 95 percent of the ice shelf that used to help stabilize it, they say, and now sports a 75 meter high ice cliff extending above the water (the glacier also extends hundreds of additional meters below it).

“This is sort of the second major floodgate from Greenland that has opened up,” says Eric Rignot of UC-Irvine and NASA’s Jet Propulsion Laboratory, one of the authors of the study. The first, says Rignot, was the Jakobshavn glacier, Greenland’s “fastest” moving, according to a recent study, which is currently based 1,300 meters below sea level and also retreating into a deep basin.

Now, at Zachariae, that seems to be happening again. In combination with its nearby neighbor, Nioghalvfjerdsfjorden glacier, the two glaciers contain a potential 1.1 meter of sea level rise (over 3 feet), so any change here is not good.

I believe that the highly technical term that best sums that latest news up is this … “Yikes”.

You can find the actual paper here – Fast retreat of Zachariæ Isstrøm, northeast Greenland, and the abstract reads …

After 8 years of decay of its ice shelf, Zachariæ Isstrøm, a major glacier of northeast Greenland that holds a 0.5-meter sea-level rise equivalent, entered a phase of accelerated retreat in fall 2012. The acceleration rate of its ice velocity tripled, melting of its residual ice shelf and thinning of its grounded portion doubled, and calving is now occurring at its grounding line. Warmer air and ocean temperatures have caused the glacier to detach from a stabilizing sill and retreat rapidly along a downward-sloping, marine-based bed. Its equal-ice-volume neighbor, Nioghalvfjerdsfjorden, is also melting rapidly but retreating slowly along an upward-sloping bed. The destabilization of this marine-based sector will increase sea-level rise from the Greenland Ice Sheet for decades to come.

The complete paper can be found here (no paywall).

What really comes up next, in just a couple of weeks is the 2015 United Nations Climate Change Conference …

We have a choice here, either we start taking decisive meaningful action at that meeting , or rather a lot of people will need to learn how to swim.