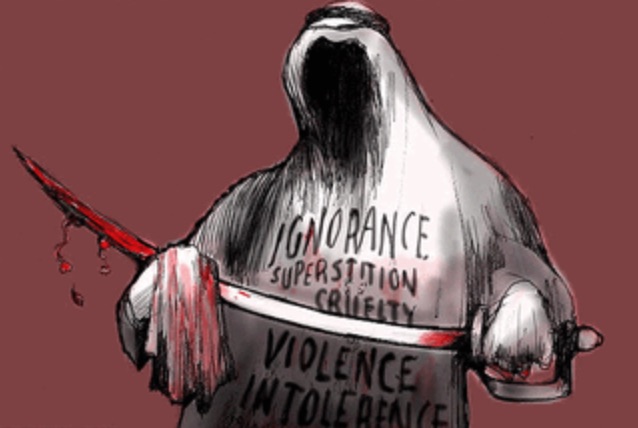 Saudi Arabia has a justice system whose reputation merits a closer look; they appear to be rather fond of chopping off heads, and so you can’t help but wonder what crimes motivate them to start slicing. As I’m sure you are aware, Saudi Arabia is a highly religious society, and so their judicial system is basically a religious one. The specific variation of Islamic belief that prevails is Wahhabism (which interestingly enough is only followed by about 23% of the population, the rest are Sunni and Shia). Wahhabism is what might be termed a very ultraconservative variation of islam and so the legal system reflects that reality because their implementation of Sharia (Islamic Law) is quite strict.

What Merits A Death Sentence?

There are specific things that would not be a surprise …

Then there are things that leave you thinking … WTF!

… then just when you think it could not get any weirder, it does, because this also merits death …

If you also review some of the above you soon find that things are not as you might expect. Take the term “Terrorism” for example, how exactly do they define that? Well apparently being an Atheist qualifies, because, as explained in the Independent last year …

Article one of the new provisions defines terrorism as “calling for atheist thought in any form, or calling into question the fundamentals of the Islamic religion on which this country is based”

… and remember that merits death if you are convicted.

In other words, they have more or less worded their legal system to empower themselves to chop of the head of anybody who dares to openly criticise their daft beliefs by labelling that as “terrorism”, so that would be me then, this posting would earn me a death sentence in Saudi Arabia.

Take for example the crime of Sorcery, does that really happen, or is that some archaic law that impacts nobody today?

Muree bin Ali bin Issa al-Asiri, who was found in possession of talismans, was executed in the southern Najran province in June 2012.

A Saudi woman, Amina bin Salem Nasser, was executed for being convicted of practising sorcery and witchcraft in December 2011 in the northern province of Jawf

… a Sudanese man (Abdul Hamid Bin Hussain Bin Moustafa al-Fakki) was executed in a car park in Medina for the same reason in September 20, 2011.

What about apostasy, is that followed through, do they really execute people for simply not believing complete and utter bullshit?

A Saudi Arabian court has sentenced a man to death for apostasy after he filmed himself tearing up a copy of the Koran, a new test case for the country’s human rights record just as its most powerful rising prince was visiting Downing Street.

So how does the Judicial System handle cases, do you get a chance to defend yourself?

There are some huge issues …

It all very much is designed to fail, and so it does, because in essence it is not a system of justice in any meaningful sense of that word, but rather is a system that incarnates a gross abuse of basic human rights.

At least 151 people have been put to death in Saudi Arabia so far this year –the highest recorded figure since 1995 – in an unprecedented wave of executions marking a grim new milestone in the Saudi Arabian authorities’ use of the death penalty, said Amnesty International.

…Death sentences in Saudi Arabia are frequently imposed for non-lethal offences, such as drug-related ones, and after unfair trials which lack basic safeguards for fair trial provided for under international human rights law and standards. This was documented in Amnesty International’s August 2015 report Killing in the Name of Justice: The death penalty in Saudi Arabia .

Almost half of the 151 executions carried out this year were for offences that do not meet the threshold of “most serious crimes” for which the death penalty can be imposed under international human rights law. This blatantly contradicts the Saudi Arabian authorities’ claims to apply the death penalty with the strictest safeguards in place. Under international human rights standards “most serious crimes” are crimes that involve intentional killing.

Of the 63 people executed this year for drug-related charges, the vast majority, 45 people, were foreign nationals. The total number of foreign nationals executed so far this year is 71. The death penalty is disproportionately used against foreigners in Saudi Arabia. Foreign nationals, mostly migrant workers from developing countries, are particularly vulnerable as they typically lack knowledge of Arabic and are denied adequate translation during their trials.

There are many many other concerns

Let’s Report them to the UN Human Rights Council

Alas, if only that was a meaningful step to take, but sadly it is not, the UN HRC has become an embarrassing joke. Not too long ago Saudi Arabia was selected to chair the UNHRC panel for appointments to be made in the current 30th session of the council, and that is quite frankly not just absurd, but is not acceptable by any measure.

Why are we willing to condemn ISIS, and yet remain firm friends with Saudi Arabia?

“Ah“, you might say, “ISIS are terrorists, Saudi Arabia would never behave as they do“.

You might want to hold that thought, and consider the well-established fact that Saudi Arabia has spent  at least $100 Billion, perhaps twice that, promoting their very extreme variation of Islamic belief all around the planet since the 1970s and have in effect bulldozed away the more moderate strains of Islam in order to replace it with their fascist variety.

If you have ever wondered why Islamists are suddenly popping up all over the planet and expressing themselves violently, then this is why, here is ground zero for it all.

So let me pose that question once more – why are these Saudi fascists our friends?

One last thought, a small glimmer of hope, this may all change because the low oil price being sustained means that they will run out of money in about five years. To survive they need oil to be $106 per barrel, and today it is $46.