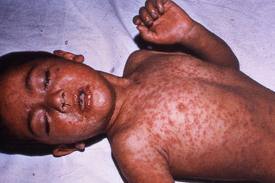 In the UK, the Thames Valley Health Protection Unit has issued a letter to the parents of every single child via the local Education Authorities because there has been an increasing number of cases of measles during 2011, especially among children. A similar rise has been observed in other countries in Europe, especially France, but also including Spain, Romania, Bulgaria and Germany. What has been happening is that folks have been away on vacation, and as a result their unimmunised children have been picking up measles, and then bringing it back.

In the US it is a similar story, they are on course to have its worst outbreak of measles in more than a decade. Travellers are catching the highly contagious illness while on vacation, then bringing it back to the U.S.

It is all down to the Anti-vaccine movement spreading fear and misinformation regarding the MMR vaccine which is both safe and highly effective. Even an ounce of doubt motivates parents to decline the MMR, and so now we have a generation where large swathes have zero protection. Before the widespread use of a vaccine against measles, its incidence was so high that infection with measles was felt to be “as inevitable as death and taxes”.

Those statistics were measured and then published here in 1985.

In fact, the vaccination program in the US was so successful that it was declared “eliminated” in 2000. Now all that effort is being undone.

In the UK, the MMR vaccine was the subject of controversy after publication of a 1998 paper by Andrew Wakefield. It reported on a study of twelve children who had bowel symptoms along with autism or other disorders, including cases where onset was believed by the parents to be soon after administration of MMR vaccine.

That paper is here.

In 2010, Wakefield’s research was found by the General Medical Council to have been “dishonest”, and The Lancet fully retracted the original paper.

The research was later declared fraudulent in 2011 by the British Medical Journal, and several subsequent peer-reviewed studies have failed to show any association between the vaccine and autism. The Centers for Disease Control and Prevention, the Institute of Medicine of the National Academy of Sciences (here), the UK National Health Service (here) and the Cochrane Library review (here) have all concluded that there is no evidence of a link between the MMR vaccine and autism.

Wakefield is no longer a doctor, he was found guilty of four counts of dishonesty and 12 counts involving the abuse of developmentally challenged children, so he was struck off, and is no longer permitted to practice medicine in the UK. Sadly, he persists with his claim and insists it was not a fraud and that there was no hoax. Other also still spread doubt and fear without any scientific evidence to backup their claims.

Have you had your Children vaccinated? If not, then you should seriously consider it. If you choose to do so, then be assured that you are making the right choice – the scientific evidence is on your side.