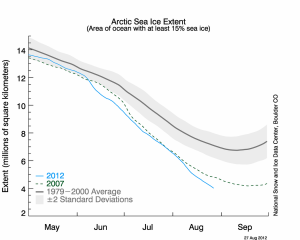 It has been confirmed that 2012 is indeed a record breaking year for the loss of sea ice in the Arctic and is now the lowest in the satellite era. The image on the left here shows the extent as of yesterday. Yes, that is newer data than the recent press reports, we have already passed the previous 2007 low (hence the press releases a few days ago), but we are not at the bottom yet and still have two or three weeks of melt to go.

Does this truly confirm climate change? Yes it does … oh but wait, some have argued that sea ice naturally varies and that it is not fixed to the ground, so it is easily blown about by the winds, perhaps making it seem as if it has vanished when in fact it has simply piled up on top of itself. Alas no, that is not the answer, the US National Snow and Ice Data Centre (NSIDC) in Boulder Co, demonstrate that there has been a decline of more than 30% since they started measuring in 1979. Could this be a natural variability? The Max Planck Institute for Meteorology in Hamburg have looked at this very question, and have concluded …

…that neither natural fluctuations nor self-acceleration can explain the observed Arctic sea-ice retreat. Instead, the recent evolution of Arctic sea ice shows a strong, physically plausible correlation with the increasing greenhouse gas concentration.

In other words, it is indeed man made and not part of a natural cycle. Sea ice is so thin that it is very sensitive to the large natural fluctuations of weather and climate that prevail in the Arctic, and because these fluctuations are inherently chaotic, their specific timing cannot be reproduced by standard climate models. So how did they reach the conclusion they have? Jochem Marotzke, Director at MPI-M and co-author of the study, describes the methodology…

For more details, you can review their actual paper here. (No paywall, you get full access there). 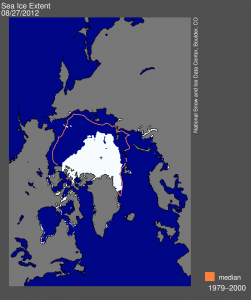 OK, so if you are interested to see how things progress in the Arctic over the next few weeks, you can do so here at the NSIDC site. In the images above and left (taken from the NSIDC site) you have the latest data, but since this is refreshed each day,  you can continue to track it yourself as it continues to shrink in the remaining melt weeks.

The bottom line is this: the disappearing sea ice is indeed a manifestation of man-made global warming. What is currently going on far exceeds the predictions of the models, the decline was not anticipated to be this rapid. Our climate is indeed changing; we may already be beyond the point of no return, huge plumes of methane have now been observed being released from beneath the permafrost of the East Siberian Arctic shelf.