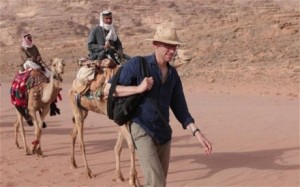 Last Tuesday ( 28th Aug) the BBC broadcast a very interesting program Islam: The Untold Story.In this,historian Tom Holland examines the real evidence regarding the origins of Islam. Traditionally, Muslims and non-Muslims alike have believed that Islam was born in the full light of history. But a large number of historians doubt that presumption, and question much of what Muslim tradition has to tell us about the birth of Islam.

So was this simply a bit of Islam bashing by a non-Muslim? No, not at all, he was very much treating the topic with deep respect; as we watched we saw him pray with the Bedouin and was also awed by the beautiful Dome of the Rock. He is also however very much interested in what is actually true and so it was quite fascinating to watch as he started to turn up some good evidence that did indeed appear to reveal that Islam developed much later than the Prophet Mohammed’s life, and that it was orchestrated by Arab leaders in more northerly lands who now found themselves in control of a huge, diverse empire filled with Christians, Jews and Zoroastrians.

Ed West followed up with his thoughts on it all in yesterdays Telegraph. having watched it myself, I was curious to glean his impressions. He describes it quite well  …

…the strangest thing about this period, known by posterity as “the Muslim conquest”, is that there is little evidence that they were Muslims at all. When the Arabs arrived in Jerusalem in 636 under Caliph Umar Ibn Al Khattab none of the chroniclers of the period have anything to say about what religion the new conquerors were.

Palestine had been under the control of the Byzantines, who had expanded the number of churches and encouraged Christian settlers, leading to much friction with the Jews. The new masters, who had just smashed a Byzantine army five times as large, seemed to look at Jewish sites with reverence, which led some Jews to see them as saviours and many Christians to feel paranoid about a Jewish reconquest.

And yet no one describes them as “Muslim”; nor does the Arab ruler of Jerusalem mention the Prophet Mohammed anywhere.

Most puzzling of all is the fact that Mecca, birthplace of Mohammed and holiest place in Islam, is not mentioned until a century after the Prophet’s death, and appears just once in the Koran – otherwise the book mentions “Bakkah”, which in Muslim tradition is another name of Mecca. Yet as Holland points out in the book, the Koranic Mecca, a place where Christians and Jews lived, does not seem to fit with the distant Arabian town of that period. From a historian’s point of view the description of the city given in the Koran far better matches various settlements in what is now Syria or Israel, the same regions that “the believers”, as the Arabs were first called, were settled in when the Koran first started to be written. So it’s possible that Bakkah was located around there. Holland even visits the site of the first known mosque, which faces not towards Mecca but east.

To put all this another way, lets ask a question, “what evidence do we have for the traditional history, as viewed by the faithful?”. Well, it turns out the factually correct answer is – next to nothing. 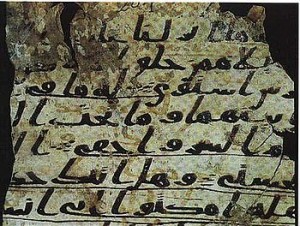 Beyond the program there are also hints arising from other areas. In 1972 ancient Qur’anic manuscripts were discovered in Sana’a, Yemen. German scholar and an authority on Qur’anic historical orthography, Gerd Puin, was commissioned by the Yemeni government, and spent a significant amount of time examining them. What did he find? Well, he is quoted by Toby Lester in a 1999 Atlantic Monthly article …

…revealed unconventional verse orderings, minor textual variations, and rare styles of orthography and artistic embellishment. Enticing, too, were the sheets of the scripture written in the rare and early Hijazi Arabic script: pieces of the earliest Korans known to exist, they were also palimpsests—versions very clearly written over even earlier, washed-off versions. What the Yemeni Korans seemed to suggest, Puin began to feel, was an evolving text rather than simply the Word of God as revealed in its entirety to the Prophet Muhammad in the seventh century A.D.

In that same article, Puin also speaks with disdain about the traditional willingness, on the part of Muslim and Western scholars, to accept the conventional understanding of the Koran.

“The Koran claims for itself that it is ‘mubeen,’ or ‘clear,'” he says. “But if you look at it, you will notice that every fifth sentence or so simply doesn’t make sense. Many Muslims—and Orientalists—will tell you otherwise, of course, but the fact is that a fifth of the Koranic text is just incomprehensible. This is what has caused the traditional anxiety regarding translation. If the Koran is not comprehensible—if it can’t even be understood in Arabic—then it’s not translatable. People fear that. And since the Koran claims repeatedly to be clear but obviously is not—as even speakers of Arabic will tell you—there is a contradiction. Something else must be going on.”

It is that quest for the truth, the desire to find out what that “something else” actually is, that motivates him and others to peel back the layers. “Belief” might indeed, as it usually does, attempt to dictate an official truth, but in the end, what really matters is discovering the things that are actually true.

We are beginning to see a story in which the Arabs first built their empire, then what followed was a religious post-rationalisation of this political fait accompli. As well illustrated by many previous rulers, having one official state sponsored belief is a powerful tool for giving sacred endorsement to existing power relationships. That status cannot prevail, most religions cultures eventually need to come to terms with the knowledge and evidence of what really happened, and with that comes doubt. Islam is no exception to this.