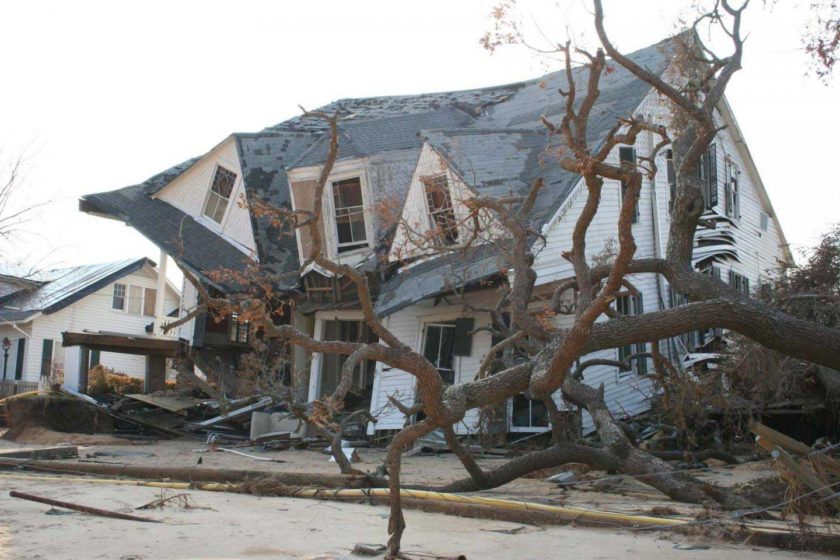 We are going to talk about Hurricanes and a new study that examines the trend regarding their intensity. With a warming climate the conclusion of the study, which we will get to, feels like an obvious one, but in the context of the prevailing taking points promoted by those opposed to science it brings a rather important insight.

Let me first explain why.

The Making of a Modern Myth

A common denialist talking point is the assertion that while disasters are becoming more costly the reason is not down to climate change. The basis for this popular claim mostly comes from one article by one guy. The article published on FiveThirtyEight from 2014 is “Disasters Cost More Than Ever — But Not Because of Climate Change” and the author is Roger Pielke Jr.

Within his article he cites data from Munich Re, a very large reinsurance company. The assertion he makes is that the only reason that disasters have become more costly is down to the observation that we have become wealthier, more people now live in the impacted regions, and that climate change plays no role.

His assertion has some truth to it and that is why it persuades some. An illustration would be the increasing costs of earthquakes. More people do indeed live in disaster regions, hence when disaster strikes it costs more.

Since he used data from Munich Re it is worth understanding that they don’t agree with him. They have concluded this …

“Among many other risk insights the study now provides new evidence for the emerging impact of climate change. For thunderstorm-related losses the analysis reveals increasing volatility and a significant long-term upward trend in the normalized figures over the last 40 years. These figures have been adjusted to account for factors such as increasing values, population growth and inflation … In all likelihood, we have to regard this finding as an initial climate-change footprint in our US loss data from the last four decades.”

While Mr Pielke is one lone guy, his article went a tad viral. Because it plays to a denialist belief, it was picked up and played as “evidence” by that demographic.

Step back, analyse it all, and you find that it rapidly falls apart. For a detailed debunking see here.

This of course brings us back to the question of Hurricanes. Is there data that confirms a worsening trend over time?

Yes there is, and so let’s move on to the latest study that covers this.

Published within the Proceedings of the National Academy of Sciences on 11th Nov 2019, this new study by researchers at the Niels Bohr Institute, University of Copenhagen, Aslak Grinsted, Peter Ditlevsen and Jens Hesselbjerg shows that hurricanes have become more destructive since 1900, and the worst of them are more than three times as frequent now than 100 years ago.

What about the Increasing Wealth factor?

Within this study they utilise a new way of calculating the destruction. By compensating for the societal change in wealth, they unequivocally show a climatic increase in the frequency of the most destructive hurricanes that routinely raise havoc on the North American southern and east coasts.

The traditional way of calculating hurricane damage, in order to be able to compare hurricanes and follow their development over time, was to survey the subsequent cost of the damage done by each hurricane. In other words, what would a hurricane from the 1950s cost, if it made landfall today? Using this method, a typical find is that the majority of the rising tendency in damage can be attributed to the fact that there are more of us and we are more wealthy, and there is quite simply more costly infrastructure to suffer damage. But evidence of a climatic change in destructive force by hurricanes has been obscured by statistical uncertainty.

Aslak Grinsted has calculated the historical figures in a new way. Instead of comparing single hurricanes and the damage they would cause today, he and his colleagues have assessed how big an area could be viewed as an “area of total destruction.” Meaning how large an area would you have to completely destroy in order to account for the financial loss. Simultaneously, this makes comparison between rural areas and more densely populated areas like cities easier, as the unit of calculation is now the same: The size of the “area of total destruction.”

The results in one graph

Within previous studies, it proved difficult to isolate the “climate signal.”

The climate signal should be understood as the effect climate change has had on hurricane size, strength and destructive force. It lay hidden behind variations due to the uneven concentration of wealth and it was statistically uncertain whether there was any tendency in the destruction. But with the new method this doubt has been eradicated.

The weather has indeed become more dangerous on the south- and east coast of the USA. Furthermore, the result obtained by the research team has turned out to be more congruent with the climate models we use to predict and understand the development in extreme weather. It fits with the physics, quite simply, that global warming has the effect that there is an increase in the force released in the most extreme hurricanes.

And so one more denialist talking point has rather robustly hit the brick wall of reality.