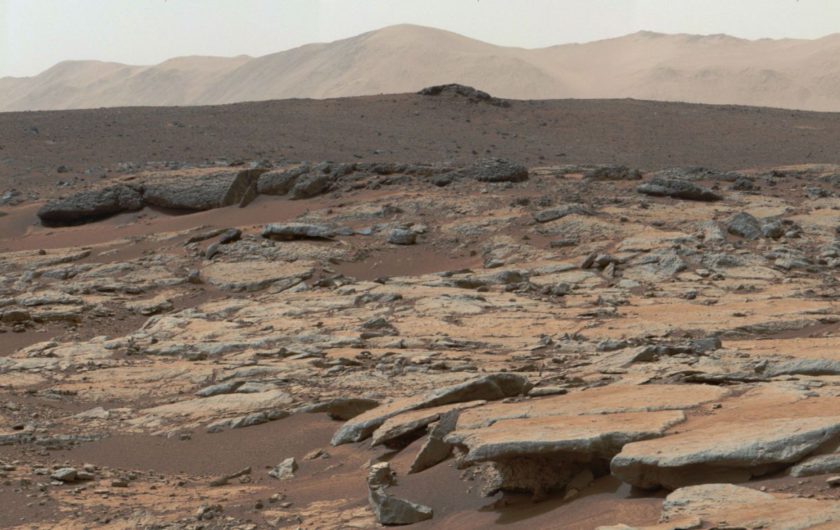 The fact that there is Oxygen on MARS is fascinating, but this not a new discovery. Before we get into the latest news let’s briefly do a quick bit of background on the topic.

We have known about the presence of Oxygen (O2) on MARS within the atmosphere for about a decade. Back in 2010 a paper titled “Herschel/HIFI observations of Mars: First detection of O2 at submillimetre wavelengths and upper limits on HCl and H2O2” was published with the details.

Do not be confused about MARS having an atmosphere that contains Oxygen, nobody will be breathing this … ever.

The precise composition of the MARS atmosphere is as follows …

You should also understand the context of all of this. 0.174% Oxygen sounds a lot … but … (and we have a very big ‘BUT’ moment here) … the atmosphere is very very thin. The surface pressure is only about 610 pascals (0.088 psi) which is less than 1% of the Earth’s value.

You might perhaps imagine what happens when flying at 30,000ft and the windows blow out. The air would be too thin to breath, but even that is nothing like MARS. Instead imagine going as high as 100,000 ft – there is almost nothing there. That’s more akin to the MARS atmosphere.

OK, so moving on, what is the new update?

Curiosity has been measuring the seasonal changes of the composition of the MARS atmosphere within the Gale Crater.

For the collected data they have no explanation for the observed seasonal variations of Oxygen.

From the Nasa Press Release here …

This is what they did …

Over the course of three Mars years (or nearly six Earth years) an instrument in the Sample Analysis at Mars (SAM) portable chemistry lab inside the belly of NASA’s Curiosity rover inhaled the air of Gale Crater and analyzed its composition. The results SAM spit out confirmed the makeup of the Martian atmosphere at the surface: 95% by volume of carbon dioxide (CO2), 2.6% molecular nitrogen (N2), 1.9% argon (Ar), 0.16% molecular oxygen (O2), and 0.06% carbon monoxide (CO). They also revealed how the molecules in the Martian air mix and circulate with the changes in air pressure throughout the year.

Here is why it is seasonal …

These changes are caused when CO2 gas freezes over the poles in the winter, thereby lowering the air pressure across the planet following redistribution of air to maintain pressure equilibrium. When CO2 evaporates in the spring and summer and mixes across Mars, it raises the air pressure.

Here is what they observed …

Within this environment, scientists found that nitrogen and argon follow a predictable seasonal pattern, waxing and waning in concentration in Gale Crater throughout the year relative to how much CO2 is in the air. They expected oxygen to do the same. But it didn’t. Instead, the amount of the gas in the air rose throughout spring and summer by as much as 30%, and then dropped back to levels predicted by known chemistry in fall. This pattern repeated each spring, though the amount of oxygen added to the atmosphere varied, implying that something was producing it and then taking it away.

Below is their graphical illustration of this …

“The first time we saw that, it was just mind boggling,”

…said Sushil Atreya, professor of climate and space sciences at the University of Michigan in Ann Arbor. Atreya is a co-author of a paper on this topic published on November 12 in the Journal of Geophysical Research: Planets.

Why is the Oxygen increasing above the predicted value?

As soon as scientists discovered the oxygen enigma, Mars experts set to work trying to explain it. They first double- and triple-checked the accuracy of the SAM instrument they used to measure the gases: the Quadrupole Mass Spectrometer. The instrument was fine. They considered the possibility that CO2 or water (H2O) molecules could have released oxygen when they broke apart in the atmosphere, leading to the short-lived rise. But it would take five times more water above Mars to produce the extra oxygen, and CO2 breaks up too slowly to generate it over such a short time.

What about the oxygen decrease?

Could solar radiation have broken up oxygen molecules into two atoms that blew away into space?

No, scientists concluded, since it would take at least 10 years for the oxygen to disappear through this process.

“We’re struggling to explain this,” said Melissa Trainer, a planetary scientist at NASA’s Goddard Space Flight Center in Greenbelt, Maryland who led this research. “The fact that the oxygen behavior isn’t perfectly repeatable every season makes us think that it’s not an issue that has to do with atmospheric dynamics. It has to be some chemical source and sink that we can’t yet account for.”

There is also a Methane Mystery on MARS

To scientists who study Mars, the oxygen story is curiously similar to that of methane. Methane is constantly in the air inside Gale Crater in such small quantities (0.00000004% on average) that it’s barely discernable even by the most sensitive instruments on Mars. Still, it’s been measured by SAM’s Tunable Laser Spectrometer.

The instrument revealed that while methane rises and falls seasonally, it increases in abundance by about 60% in summer months for inexplicable reasons. (In fact, methane also spikes randomly and dramatically. Scientists are trying to figure out why.)

With the new oxygen findings in hand, Trainer’s team is wondering if chemistry similar to what’s driving methane’s natural seasonal variations may also drive oxygen’s. At least occasionally, the two gases appear to fluctuate in tandem.

“We’re beginning to see this tantalizing correlation between methane and oxygen for a good part of the Mars year,” Atreya said. “I think there’s something to it. I just don’t have the answers yet. Nobody does.”

Where does Oxygen on MARS come from?

Is this evidence of life?

Oxygen and methane can be produced both biologically (from microbes, for instance) and abiotically (from chemistry related to water and rocks).

Scientists are considering all options, although they don’t have any convincing evidence of biological activity on Mars. Curiosity doesn’t have instruments that can definitively say whether the source of the methane or oxygen on Mars is biological or geological.

Leaning towards an explanation

Scientists expect that non-biological explanations are more likely and are working diligently to fully understand them.

Trainer’s team considered Martian soil as a source of the extra springtime oxygen. After all, it’s known to be rich in the element, in the form of compounds such as hydrogen peroxide and perchlorates. One experiment on the Viking landers showed decades ago that heat and humidity could release oxygen from Martian soil. But that experiment took place in conditions quite different from the Martian spring environment, and it doesn’t explain the oxygen drop, among other problems.

Other possible explanations also don’t quite add up for now. For example, high-energy radiation of the soil could produce extra O2 in the air, but it would take a million years to accumulate enough oxygen in the soil to account for the boost measured in only one spring, the researchers report in their paper.

“We have not been able to come up with one process yet that produces the amount of oxygen we need, but we think it has to be something in the surface soil that changes seasonally because there aren’t enough available oxygen atoms in the atmosphere to create the behavior we see,” said Timothy McConnochie, assistant research scientist at the University of Maryland in College Park and another co-author of the paper.

The only previous spacecraft with instruments capable of measuring the composition of the Martian air near the ground were NASA’s twin Viking landers, which arrived on the planet in 1976. The Viking experiments covered only a few Martian days, though, so they couldn’t reveal seasonal patterns of the different gases. The new SAM measurements are the first to do so. The SAM team will continue to measure atmospheric gases so scientists can gather more detailed data throughout each season. In the meantime, Trainer and her team hope that other Mars experts will work to solve the oxygen mystery.

“This is the first time where we’re seeing this interesting behavior over multiple years. We don’t totally understand it,” Trainer said. “For me, this is an open call to all the smart people out there who are interested in this: See what you can come up with.”

Unrelated to the above, but still rather fascinating, Curiosity captured the images of what are believed to be water vapour clouds on MARS.

NASA’s Curiosity Mars rover imaged these drifting clouds on May 17, 2019, the 2,410th Martian day, or sol, of the mission, using its black-and-white Navigation Cameras (Navcams).

These are likely water-ice clouds about 19 miles (31 kilometers) above the surface. They are also “noctilucent” clouds, meaning they are so high that they are still illuminated by the Sun, even when it’s night at Mars’ surface. Scientists can watch when light leaves the clouds and use this information to infer their altitude.