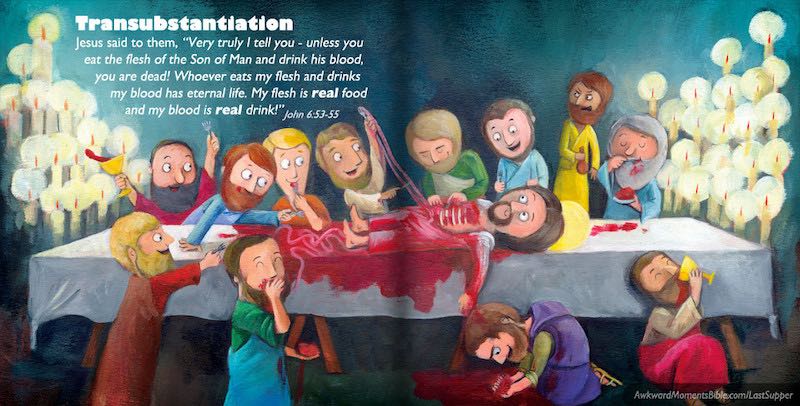 This is not really a posting about religious belief. It starts out that way, but hang in there because I’m going somewhere with this. Buckle up, it is going to be a ride with a few surprising twists and turns.

What do Catholics believe?

If somebody told you that they were Catholic, you would quite rightly assume that they embraced most of the ideas associated with that specific variation of Christian belief, or at the very least the important bits. As an example, one very specific part of it all is the claim that during the Catholic Mass the bread and the wine is not simply symbolic but literally becomes Jesus. The word used to describe this is “transubstantiation“. As described by Wikipedia …

Transubstantiation (Latin: transsubstantiatio; Greek: μετουσίωσις metousiosis) is, according to the teaching of the Roman Catholic Church, the change of substance or essence by which the bread and wine offered in the sacrifice of the sacrament of the Eucharist during the Mass, become, in reality, the body and blood of Jesus Christ

This is a rather central piece of Catholic doctrine, and so you would perhaps assume that anybody who rejects this idea is probably not truly Catholic.

A new Pew survey reveals something rather astonishing.

During a recent poll Pew asked those that used the term Catholic if they actually believed that the bread and wine turned into Jesus during the mass. What they discovered was rather surprising.

Pew: Just one-third of U.S. Catholics agree with their church that Eucharist is body, blood of Christ

This naturally leads you to wonder if their data is correct. Perhaps many who self-identify as Catholic simply have a Catholic cultural inheritance but don’t practise that belief or attend Mass, hence are not familiar with the beliefs of practising Catholics.

Pew probed a bit deeper, and so their results don’t all come from an answer to just one question.

What comes from the detail is still very surprising

What is not a surprise is that among the less-committed Catholics who do not attend Mass weekly, large majorities say they believe the bread and wine are symbolic and do not actually become the body and blood of Jesus.

The following is however very surprising …

Here are the details of how this Pew data breaks down …

What does this actually tell us about belief?

We often use words to describe things that in reality are far more complicated. For example we have specific words to describe variations of belief such as “Christian”, “Muslim”, “Hindu”, etc… or words that describe variations of a specific belief such as “Evangelical”, “Catholic”, “Baptist”, etc…We also have similar breakdowns within other contexts such as politics. Examples there are the obvious words such as “Socialist”, “Conservative”, “Liberal”, or perhaps we associate with a specific party and use terms such as “Republican” or “Democrat”.

These are all familiar identities that people adopt.

Once we hear such a word it is easy to then assume that all those using that word adhere to the core principles that would be commonly associated with that word.

It turns out that this is simply not the way things actually are.

It gets even more complicated psychologically when identity comes into play.

If you ask people specific things outside of the identity politics such as conducting a survey about the idea of doing a background check for those wishing to purchase guns, we discover that 92% favour this and only 7% oppose this. If you then ask exactly the same question to exactly the same people in a different way, and phrase it in a manner that triggers identity politics, the number drops to 51%.

In other words, often we pay lip service to what we think we need to adhere to when there comes a moment to roll out and display our supposed identity. Probe a bit deeper, and what you discover is that many don’t actually believe or adhere to the things that they claim to adhere to or believe in.

You perhaps thought that this was a positing specifically about Catholicism. Instead it turns out to be something about humans in general.

Identity is a fascinating topic.

Those who had embraced a specific identity and invested in that happily abandoned reality and picked A.

You know that B is the correct answer, and you should also recognise that all who picked A also know that B is the factual answer. Picking A is not about stupidity. Instead it enabled them to preserve the identity that they had embraced at an emotional level because the question was viewed as a threat. In response many opted to be factually wrong, and picked A even if they did not actually believe it.

Humans are like this, and it is quite frankly fascinating.

The implication of it is this. If you wish to truly engage and have a meaningful conversation with people about hot button identity topics such as politics or religion, then you need to engage in a manner that does not threaten their identity.

If you don’t then you will fail.