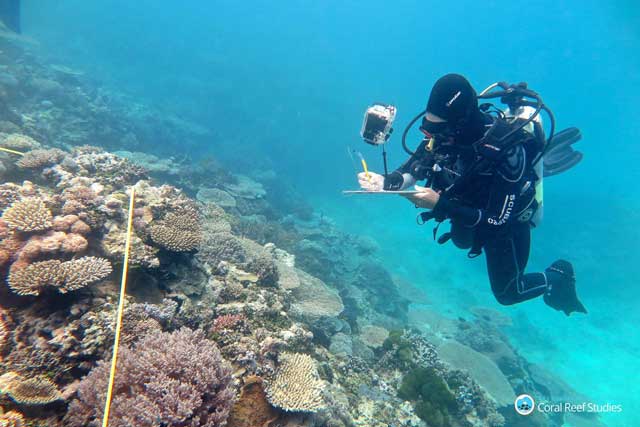 Higher water temperatures in 2016 caused the worst destruction of corals ever recorded on Australia’s Great Barrier Reef, a study has found.

Some 67% of corals died in the reef’s worst-hit northern section, the ARC Centre of Excellence for Coral Reef Studies report said.

The situation was better in the central section, where 6% perished, while the southern reef is in good health.

But scientists warn recovery could be difficult if climate change continues.

To be wholly clear here, the bleaching actually happened last March. What is new here is that a recent extensive survey has been conducted, and so the information from earlier surveys is added to the results of this latest survey in Oct / Nov. This now enables a clear view of what is now dead coral and what has recovered or is starting to recover once again.

Bleaching is not the same as dead coral, but when that happens it is highly probable that much of the bleached coral will die.

Basically what is going on is that Coral has a symbiotic relationship with algae-like unicellular organisms. It is specifically Zooxanthellae that give coral its coloration. When the coral comes under stress due to variations in the sea temperature that cause it to become too hot or too cold, the coral responds by ejecting their zooxanthellae, thus they turn white and so become bleached.

In other words, bleaching means that it will probably die, so you need to survey later to see what has actually happened, and that is what this latest survey has now done.

The news is not good.

What is the Alpha Source, and what is it telling us?

The BBC is simply reporting information that comes from another source. In this case that source is Australian ARC Centre of Excellence for Coral Reef Studies. They specifically engaged the BBC and took them on a tour to show them what was going on. Additionally, on Tuesday 29th, the ARC Centre issued the following press release …

Scientists have confirmed the largest die-off of corals ever recorded on Australia’s Great Barrier Reef.

“Most of the losses in 2016 have occurred in the northern, most-pristine part of the Great Barrier Reef. This region escaped with minor damage in two earlier bleaching events in 1998 and 2002, but this time around it has been badly affected,” says Professor Terry Hughes, Director of the Australian Research Council (ARC) Centre of Excellence for Coral Reef Studies based at James Cook University, who undertook extensive aerial surveys at the height of the bleaching.

“The good news is the southern two-thirds of the Reef has escaped with minor damage. On average, 6% of bleached corals died in the central region in 2016, and only 1% in the south. The corals have now regained their vibrant colour, and these reefs are in good condition,” says Professor Andrew Baird, also from the ARC Centre, who led teams of divers to re-survey the reefs in October and November.

They also have a map that clearly illustrates it all … 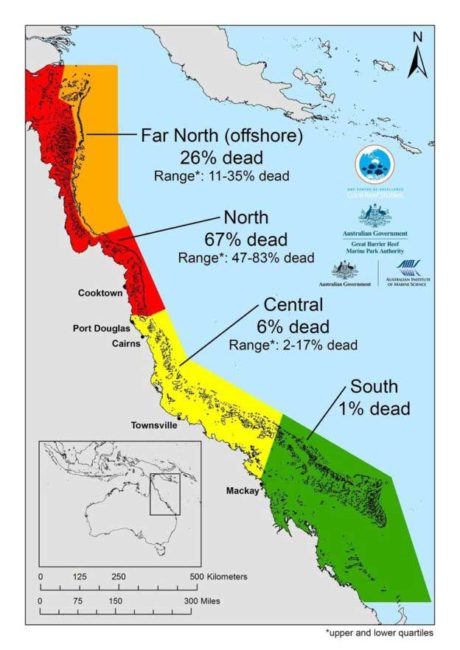 The root cause is specifically identified as climate change. This is not new, but is part of an on-going decline that has been happening over the last thirty years.

To illustrate that point, we can point back to a 2012 paper that examined the then 27–year decline of coral cover on the Great Barrier Reef and its causes. There they lay it all out …

This study investigates the spatial and temporal dynamics of coral cover, identifies the main drivers of coral mortality, and quantifies the rates of potential recovery of the Great Barrier Reef. Based on the world’s most extensive time series data on reef condition (2,258 surveys of 214 reefs over 1985–2012), we show a major decline in coral cover from 28.0% to 13.8% (0.53% y−1), a loss of 50.7% of initial coral cover.

… and hence in context, this latest sharp decline in that Northern region is indeed rather dire.

What also recently made the news was this …

Late last week Pauline Hanson went on a snorkel to try and disprove claims the reef is dying.

Great Keppel Island is south of Hayman Island where I dived. And this explains why Senator Hanson’s snorkel was more successful than someone taking a plunge further north where the bulk mass bleaching has occurred, as Adam Morton explains.

So basically she picks the best possible spot in the south to establish her denial claim and simply ignores what is actually going on further up North.

Somebody asked within the comments section under a recent article …

Pauline said on national news the other day that the reef is in good health. Who do we believe?

Well gosh, that’s a hard question to answer, how can we possibly decide between the scientists who have surveyed the entire reef and studied it in detail or the Trump like politician who cherry-picked one location on one day for a few minutes to conduct their own survey?

I do confess that I love that she made her announcement that the Great Barrier Reef is doing just fine just a few days before the formal release of clear decisive evidence that it has just had its worst ever bleaching event ever recorded and that rather a lot of the coral was now dead. The timing is just perfect and revels that she is either being incredibly stupid or deliberately deceptive.

Hint: the location of where all the bleaching actually happened has been public knowledge since last March.

Hopefully the public will remember her deliberate dishonesty at the next election.

More Details on the 2016 Bleaching

Buried at the bottom of the press release is this …

For a more detailed discussion about the mortality map, an article will be published in the Conversation on Tuesday 29 November, 2016 (AEST)

… and sure enough, just as they promised, here it is.

There they examine the question – “How much coral has died in the Great Barrier Reef’s worst bleaching event?”

Here are a few quick facts distilled from that article …

In summary, yet another alarm bell is ringing our loudly to warm us about the impact of global warming.