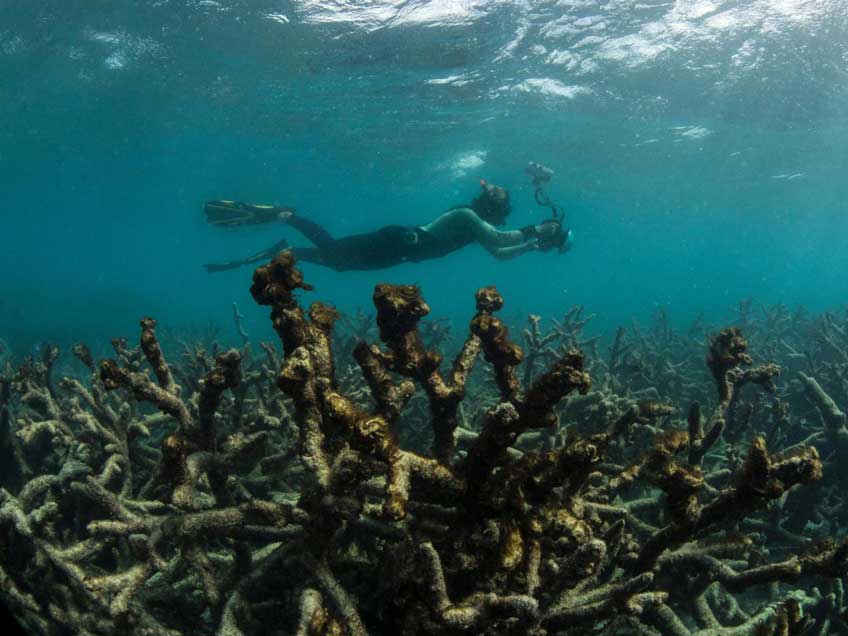 The UK’s Independent reports the rather dire news that the Great Barrier Reef is in trouble due to climate change. Back in April I was writing about how vast back-to-back mass coral bleaching events had hit the Great Barrier Reef, and so what is motivating this posting is the fallout from that as various experts ponder over the implications.

First, a quick bit of catchup to get you up to speed

What is Coral Bleaching?

Basically what is going on is that Coral has a symbiotic relationship with algae-like unicellular organisms. It is specifically Zooxanthellae that gives coral its coloration. When the coral comes under stress due to variations in the sea temperature that causes it to become too hot or too cold, the coral responds by ejecting the zooxanthellae, thus they turn white and so become bleached.

In other words, bleaching means that it will probably die, so there will be a need to survey later to see what has actually happened.

March 2016 saw a huge bleaching event. Later surveys then confirmed that this resulted in an average 67% loss of corals in the northern 700 km section of the Great Barrier. Such events had been previously recorded in 2002 and then in 1998, so there was an expectation that perhaps given time it might recover.

Unfortunately, April 2017 saw yet another mass breaching event, and so for the first time ever it had happened two years in a row back-to-back. That is a game changer and has huge implications.

We do not yet know the precise impact of this 2017 bleaching event. That will require time and rather a lot of surveying later this year, but what such surveys will reveal are already being anticipated. The subject matter experts familiar with what happens know what such surveys will most probably confirm, and so they have already been pondering over the implications.

On 5th May, an update was issued by the experts attending the seventh meeting of the Reef 2050 Plan Independent Expert Panel in Brisbane. Given the context of the widespread coral bleaching in both 2016 and 2017, this focused the subject matter experts into putting their heads together to come up with advice and guidance. Their official statement was as follows:

Members agreed that in our lifetime and on our watch, substantial areas of the Great Barrier Reef and the surrounding ecosystems are experiencing major long-term damage which may be irreversible unless action is taken now. The planet has changed in a way that science informs us is unprecedented in human history. While that in itself may be cause for action, the extraordinary rapidity of the change we now observe makes action even more urgent.

The Panel considers that action to reduce emissions of greenhouse gases must be central to the response. This needs to be coupled with increased efforts to improve the resilience of the coral and other ecosystems that form the Great Barrier Reef. The focus of efforts should be on managing the Reef to maintain the benefits that the Reef provides.

The Panel agreed that the Reef 2050 Plan is a strong foundation to strengthen the long-term strategy for Reef protection through the mid-term review in 2018. Changes should include:

In the short-term, continued efforts should include:

This is the guidance from the panel. A consolidated update will be formulated over the coming weeks and will be presented to the Great Barrier Reef Ministerial Forum in July. They will also be meeting again in August and October to review further information as it becomes available via surveys.

Are they Giving up?

The above sets a tone that suggests they have not given up, but unofficially it is a different story …

While the committee’s communique did not expressly give up hope that the reef could be saved in its current form, the Guardianreported that two experts on the committee, speaking anonymously, revealed they had recommended introducing the goal of maintaining “ecological function” at a recent meeting.

And the Great Barrier Reef Marine Park Authority explained what that would mean.

“The concept of ‘maintaining ecological function’ refers to the balance of ecological processes necessary for the reef ecosystem as a whole to persist, but perhaps in a different form, noting the composition and structure may differ from what is currently seen today,” the authority said.

Twitter allows nerdy scientists like me to appeal for help for the #GreatBarrierReef. Please RT…. half the shallow-water corals just died. pic.twitter.com/ZULnOAzFfi

Hey @UNESCO, what percentage of the #GreatBarrierReef needs to be dead before you declare it "in danger"? https://t.co/o0huxUVmVr