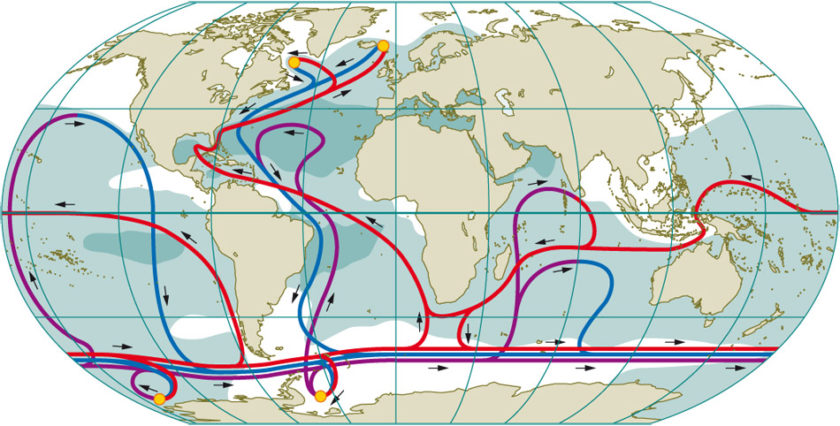 It has been thought for some time that climate change would impact the ocean circulation system by slowing it down. A new study now reports the opposite of that. Global ocean circulation has accelerated over the past twenty years, and in tropical waters in particular.

Study: Deep-reaching acceleration of global mean ocean circulation over the past two decades

Published in Science Advances on 5th Feb 2020, the study is described as follows ….

Here, we show a statistically significant increasing trend in the globally integrated oceanic kinetic energy since the early 1990s, indicating a substantial acceleration of global mean ocean circulation. The increasing trend in kinetic energy is particularly prominent in the global tropical oceans, reaching depths of thousands of meters. The deep-reaching acceleration of the ocean circulation is mainly induced by a planetary intensification of surface winds since the early 1990s. Although possibly influenced by wind changes associated with the onset of a negative Pacific decadal oscillation since the late 1990s, the recent acceleration is far larger than that associated with natural variability, suggesting that it is principally part of a long-term trend.

Why did they study this?

There are specific things we do understand. To be specific …

Such thinking has motivated the researchers behind this study to look for changes in ocean circulation.

Hu Shijian, an oceanographer at the Chinese Academy of Sciences’s Institute of Oceanology and lead author of the study, along with colleagues used ocean current measurements from the Global Marine Argo Atlas. Argo consists of floats that monitor ocean features right around the globe. With this they calculated the total global kinetic energy. Global kinetic energy describes the movement of seawater and provides an index for ocean circulation intensity.

What did they find and how sure are they about this?

While total kinetic energy varied before 1990, the researchers found with 99% confidence that it increased sharply as the 1990s began.

The researchers then calculated how much circulation has accelerated throughout the water column using the European Centre for Medium-Range Weather Forecasts Ocean Analysis/Reanalysis System, the Global Ocean Data Assimilation System, and several other model-based lines of evidence. They identified increased kinetic energy in about 76% of the upper 2,000 meters of global oceans. This is due to intensification of surface winds since the 1990s, itself a result of a longer-term trend, the authors say, with only a relatively small contribution from natural variability.

What are the implications of this insight?

It brings a lot of questions rather than answers.

Back to my opening observation – Ocean circulation plays an important role. Clearly and obviously we will be impacted. The degree to which this will ripple out into the climate system is a new question that will motivate further research.

What exactly is going on out there?

It is variable. For example …

What this new study reveals is the big picture on a global scale (see below). Yes the Gulf Stream may indeed be weakening due to Arctic ice melt, and that has implications for the climate in northern Europe, but overall an acceleration of ocean currents makes sense.

A great deal of energy is being poured into the world’s oceans due to climate change. An overall acceleration of ocean currents on a global scale makes sense.

How real is the observation from the study?

Oceans to have natural cycles, so one question is to ask if this is part of a natural cycle or if this something else?

The paper itself makes this point …

the increasing trend during the past two decades is much greater than the natural variability and commences from the early 1990s, which does not match the late 1990 or early 2000 onset of the Pacific decadal oscillation (PDO)

It is all very complicated

This is where things get a tad complicated. Picking up measurements from Argo floats might appear to be easy. Dig into the details and it turns out to be very challenging.

No sustained, direct measurements of currents around the world are available. Instead, Hu’s team turned to so-called reanalyses, which combine observations of the ocean and atmosphere with computer models to fill in the gaps and produce a global picture. The approach is tricky to use for time spans of decades. Changes in observations, for example when new satellites come online, can cause unknown biases.

The research team combined five different reanalyses of ocean circulation, hoping their differing methods could reveal a true trend. From each one they extracted the ocean’s kinetic energy month by month. At a coarse scale that would ignore the turbulence of eddies and storms. And each showed a distinct rise starting around 1990.

A look at data from the Argo array, a fleet of nearly 4000 robotic floats deployed around the world, provided the best test. The floats have been bobbing up and down in the ocean’s uppermost 2000 meters for the past 15 years, measuring temperature and salinity. They don’t track velocity through the water column. But their data do indicate where winds have piled up water, helping create differences in pressure that drive large-scale flows. By combining those data with the floats’ own current-borne trajectories, investigators can reconstruct overall currents and their speed.

A data set, compiled by oceanographer Alison Gray of the University of Washington, Seattle, covers only 6 years, from 2005 to 2010, but Hu found that it reveals an even clearer global speedup than the reanalysis models.

To quote the study itself …

…uncertainties remain primarily since long-term direct observations of ocean currents are lacking for a direct verification. Although the increasing trend of TKE during the past two decades is a common feature of the reanalysis and data products we used, differences in spatial resolutions and spatial coverages give rise to a difference in TKE and their trend magnitude. In addition, the available in situ observations are mainly confined to the upper 2000-m layer, and, as shown in our results, the data-void abyssal ocean is likely to be important. Thus, intensive observations that monitor the deep global ocean circulation are urgently needed not only for understanding past conditions but also for reducing uncertainty in future projections of the global ocean circulation.

What do subject Matter experts think of all this?

Eleanor Frajka-Williams, an oceanographer at the United Kingdom’s National Oceanography Centre, who was not part of the study …

“The evidence in the Argo data is absolutely astonishing,”

Oceanographers will likely fan out to test the study’s findings. Perhaps the strongest confirmation could come from updated data from the Argo floats, due out later this year. Still, it will probably take another decade of observations to be sure the trend is real and driven by global warming.

Susan Wijffels, an oceanographer at the Woods Hole Oceanographic Institution …

“It’s going to stimulate a lot of other work…. This paper does highlight how ill prepared we are to truly diagnose what’s going on.”