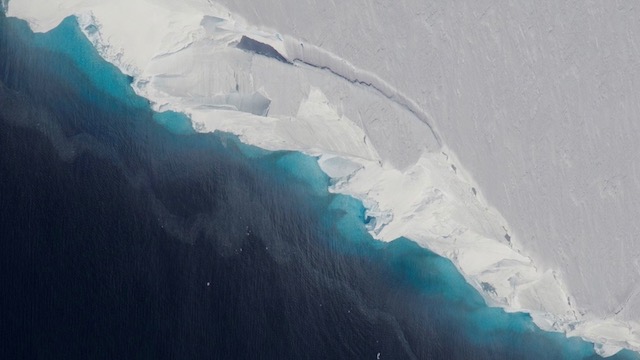 The media has picked up some stories concerning Antarctica’s Thwaites Glacier. For example …

What is the alpha source for these stories?

Basically it is the following NASA JPL Press Release: “Huge Cavity in Antarctic Glacier Signals Rapid Decay“. There they explain …

A gigantic cavity – two-thirds the area of Manhattan and almost 1,000 feet (300 meters) tall – growing at the bottom of Thwaites Glacier in West Antarctica is one of several disturbing discoveries reported in a new NASA-led study of the disintegrating glacier. The findings highlight the need for detailed observations of Antarctic glaciers’ undersides in calculating how fast global sea levels will rise in response to climate change.

Researchers expected to find some gaps between ice and bedrock at Thwaites’ bottom where ocean water could flow in and melt the glacier from below. The size and explosive growth rate of the newfound hole, however, surprised them. It’s big enough to have contained 14 billion tons of ice, and most of that ice melted over the last three years.

“We have suspected for years that Thwaites was not tightly attached to the bedrock beneath it,” said Eric Rignot of the University of California, Irvine, and NASA’s Jet Propulsion Laboratory in Pasadena, California. Rignot is a co-author of the new study, which was published today in Science Advances. “Thanks to a new generation of satellites, we can finally see the detail,” he said.

There is a deeper source

Beyond the press release there is a study that has been published within Science Advances on 30th january. Titled “Heterogeneous retreat and ice melt of Thwaites Glacier, West Antarctica“, it lays out the precise details …

The glaciers flowing into the Amundsen Sea Embayment, West Antarctica, have undergone acceleration and grounding line retreat over the past few decades that may yield an irreversible mass loss. Using a constellation of satellites, we detect the evolution of ice velocity, ice thinning, and grounding line retreat of Thwaites Glacier from 1992 to 2017. The results reveal a complex pattern of retreat and ice melt, with sectors retreating at 0.8 km/year and floating ice melting at 200 m/year, while others retreat at 0.3 km/year with ice melting 10 times slower. We interpret the results in terms of buoyancy/slope-driven seawater intrusion along preferential channels at tidal frequencies leading to more efficient melt in newly formed cavities. Such complexities in ice-ocean interaction are not currently represented in coupled ice sheet/ocean models.

Why does this really matter?

Basically there are several reasons …

What has scientists truly worried is that as the grounding line for thwaites retreats inland the topography of the land falls, hence it may be very prone to a rapid retreat. In fact, there are already several studies that suggest that Thwaites is already in a stage of collapse and the retreat is unstoppable.

For completeness, this grounding line has already been observed to be retreating at 0.6 to 0.9 km/year between 1996 and 2011, hence a huge new scientific effort is underway to study it in more detail. (You can ready more about that here on their official collaboration website).

This matters because the cavity enables more heat and water to get in underneath it and so accelerate the melting.

The huge cavity is under the main trunk of the glacier on its western side – the side farther from the West Antarctic Peninsula. In this region, as the tide rises and falls, the grounding line retreats and advances across a zone of about 2 to 3 miles (3 to 5 kilometers). The glacier has been coming unstuck from a ridge in the bedrock at a steady rate of about 0.4 to 0.5 miles (0.6 to 0.8 kilometers) a year since 1992. Despite this stable rate of grounding-line retreat, the melt rate on this side of the glacier is extremely high.

“On the eastern side of the glacier, the grounding-line retreat proceeds through small channels, maybe a kilometer wide, like fingers reaching beneath the glacier to melt it from below,” Milillo said. In that region, the rate of grounding-line retreat doubled from about 0.4 miles (0.6 kilometers) a year from 1992 to 2011 to 0.8 miles (1.2 kilometers) a year from 2011 to 2017. Even with this accelerating retreat, however, melt rates on this side of the glacier are lower than on the western side.

Below is an illustration from the paper …

The explain the above as follows …

Why this paper now?