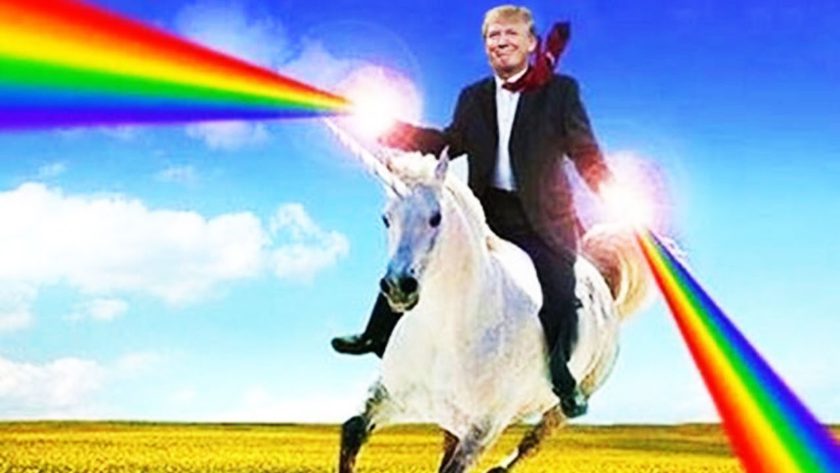 The word weird is of course wholly appropriate for the blend of religion and right-wing politics. Other words that naturally come to mind include “delusional” and “fantasy” because these are folks who don’t just read books about Narnia, but instead they have moved in, taken up residence, and live there.

This is a place where unicorns and dragons are quite real. Ok, so nobody really believes unicorns or dragons are real … right?

Actually yes they do. Some fundamentalists who embrace a literal reading of the bible embrace the idea that unicorns are quite real, and also flying fire-breathing dragons are also quite real.

If you believe stuff like that, then it is not exactly a huge leap to embrace the idea of Trump being especially anointed by God and is akin to a messiah like figure.

What happened during the last seven days?

Trump is still promoted as a new messiah chosen by god

(The word “delusional” simply no longer cuts it as a sufficient description …. but some do finally see the light. Ann Coulter, who once wrote a book titled “In Trump We Trust,” is now calling Trump a lazy and incompetent “lunatic.”)

Extremists are rather worried about extremists …

Alexa is the Antichrist …

(I’d be tempted to make a quip about artificial ignorance … except in his case it is quite real, there is nothing artificial about it)

Dave Kistler: ‘Homosexuality Should Have the Same Stigma’ as Pedophilia…

(The majority of people who are religious have no problem at all with evolutionary biology, it is only a fringe that has not evolved and adapted to the modern world. They are destined to face extinction)

Unless you are exactly us, then you are out …

Trump’s HHS Gives OK to Taxpayer-Funded Agency That Rejects Catholics, Jews, Gays…“Under Miracle Hill’s policies, not only Jews are rejected” as potential mentors and foster parents, reported the Religion News Service. “Muslims, Hindus and atheists are also barred from fostering or mentoring children in the nonprofit’s programs; so too are Catholics.” Don’t even ask about same-sex couples, even if they’re Protestant. Miracle Hill has reportedly received millions of dollars from the state and federal governments.

What happens to those that believe when conspiracies don’t pan out?

Liz Crokin Says She’ll ‘Have to Bow Out’ of QAnon Movement if ‘Mass Arrests Don’t Happen This Year’…”Quite frankly, if they don’t happen this year, then I’m going to have to bow out of this because exposing this for the past two-and-a-half years has really taken a toll on my health,” she said. “I’m sick of it. I’m sick of talking about it. It’s so depressing and I’m just over it. I’m going to have to move on

(If you drive full throttle into the brick wall of reality believing really hard, then there is something rather inevitable about the outcome)

Christian Evangelist: My Son Was “Raised from the Dead” and So Were 30-40 Others…

(Evidence for this claim? Nothing at all. Apparently we just have to trust that he is telling the truth)

Shari Wassell and Chris McDonald Say White MAGA Christians are Just Like Victims of Jim Crow Segregation…“it is the 50s and 60s all over again in America, only today it is white conservative Christians who are the targets of relentless discrimination and prejudice.

(criticism of your intolerance and xenophobia does not mean you are a victim, it means you are a dumbass).

Highlight of the Week – Some good news

Attorneys for the State of Kentucky have concluded that Kim Davis should be responsible for paying the $250,000 in legal fees that the state incurred as a result of her refusal to grant marriage licenses to same-sex couples in 2015.

As a bit of background, she is the court clark who banned all her staff from issuing marriage licenses to gay couples. Normally when somebody can’t do something for religious reasons, the standard is “I’m sorry I can’t assist, but my colleague will be right over to help“. That is a personal choice and also quite legal. This lady took it to an entirely new level by imposing her personal beliefs as the official policy of her court by banning all her staff from issuing licenses. Now she reaps the consequences of imposing her own personal discrimination beliefs as official policy.