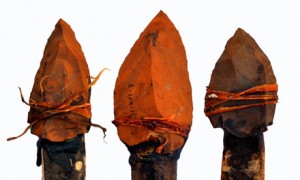 Its an exciting find, there is now clear evidence that the common ancestor of both humans and Neanderthals hunted with stone tipped spears … half a million years ago.

Let that number sink in.

The specific news is that we knew that stone spears were in use 300,000 years ago, but a new study now pushes this back another 200,000 years. It expands our understanding, because that now means, as reported in the Guardian, it was not a human invention …

The invention of stone-tipped spears was a significant point in humanevolution, allowing our ancestors to kill animals more efficiently and have more regular access to meat, which they would have needed to feed ever-growing brains. “It’s a more effective strategy which would have allowed early humans to have more regular access to meat and high-quality foods, which is related to increases in brain size, which we do see in the archaeological record of this time,” said Jayne Wilkins, an archaeologist at the University of Toronto who took part in the latest research.

The technique needed to make stone-tipped spears, called hafting, would also have required humans to think and plan ahead: hafting is a multi-step manufacturing process that requires many different materials and skill to put them together in the right way. “It’s telling us they’re able to collect the appropriate raw materials, they’re able to manufacture the right type of stone weapons, they’re able to collect wooden shafts, they’re able to haft the stone tools to the wooden shaft as a composite technology,” said Michael Petraglia, a professor of human evolution and prehistory at the University of Oxford who was not involved in the research. “This is telling us that we’re dealing with an ancestor who is very bright.”

The use of spears is in fact not a new discovery, and can be dated back to at least 600,000 years ago, from sites in Germany, but those are nothing more than sharpened sticks. This however is different, as mentioned about, stone tipped spears involves thinking and planning.

Jayne Wilkins, the archaeologist whose paper this is, examined sharp stones found at a site called Kathu Pan, in the Northern Cape region of South Africa. The question of the moment was, to ask if these were simply used for handheld purposes such as cutting or butchery.

Wilkins took close-up photographs and put the stones under a microscope to look for the tell-tale damage caused to stones whenever they are used on spears. “We know from experimental studies that, when a point is used as a spear tip, the concentration of damage is greater at the tip of the point than along the edges,” she said. “That’s the same pattern we saw in the Kathu Pan point.”

And the conclusion … Homo heidelbergensis had developed stone-tipped tools. Around 300,000-400,000 years ago Homo sapiens and Neanderthals split from this common ancestor and so both inherited this technology.

Hafting stone points to spears was an important advance in weaponry for early humans. Multiple lines of evidence indicate that ~500,000-year-old stone points from the archaeological site of Kathu Pan 1 (KP1), South Africa, functioned as spear tips. KP1 points exhibit fracture types diagnostic of impact. Modification near the base of some points is consistent with hafting. Experimental and metric data indicate that the points could function well as spear tips. Shape analysis demonstrates that the smaller retouched points are as symmetrical as larger retouched points, which fits expectations for spear tips. The distribution of edge damage is similar to that in an experimental sample of spear tips and is inconsistent with expectations for cutting or scraping tools. Thus, early humans were manufacturing hafted multicomponent tools ~200,000 years earlier than previously thought.

What else do we know about from the distant past?