I have two Star related items for you today. 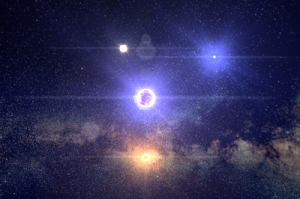 Google has launched a new Chrome Experiment called “100,000 Stars,” which provides a stunning look at the stars that arerelatively close to Earth – you know, just a few light years away.

Visualizing the exact location of every star in the galaxy is a problem of, well, galactic proportions. With over 200 billion stars, capturing every detail of the Milky Way currently defies scientists and laptops alike. However, using imagery and data from a range of sources, including NASA and the European Space Agency (ESA), we were recently able to take one small step in that direction by plotting the location of the stars closest to our sun.

The result is a new Chrome Experiment called 100,000 Stars that visualizes the stellar neighborhood. Using your mouse or trackpad, you can zoom in and out to explore our galaxy. Zooming in reveals the names of the most prominent stars close to our sun – click each name to learn more about it and see a digital rendition.

So what have we got here, why just chrome? Because it makes use of Google Chrome’s support for WebGL, CSS3D, and Web Audio … then again it is by Google, and they would perhaps be motivated to only do stuff that is unique to their own browser as a means to attempt to tout it as superior to any other out there … ah but even so, its cool.

Here is the link to it … http://workshop.chromeexperiments.com/stars/  (It also comes with music Music by Sam Hulick – composer for the Mass Effect game). 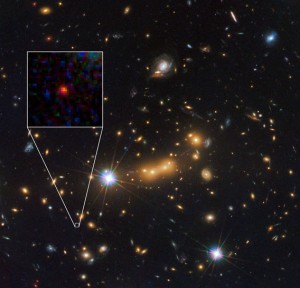 In a Galaxy far far away … very far away.

The second item is about a new discovery. Phil Plait (the Bad Astronomy blogger), writes in Slate about what may be the most distant object ever seen (pictured here on the right).

The object in question—called MACS0647-JD—is the red blob in the inset. If the calculations hold out, that gloppy looking thing may be at the mind-crushing distance of almost 13.3 billion light years. The light we see from it started on its way when the universe itself was only 420 million years old.

Just typing that made the hair on the back of my neck stand up.

Indeed yes, a glimpse of something from the dawn of time and space. Phil goes on to explain how we know that it really is that far away, so if curious about that, you can click to read up on it (hint: it’s all about red-shift and gravitational lensing).

What is worth adding to all this is that this is all preliminary, the research paper has not yet been published … but even so, it is truly mind-blowing stuff, even if at this point in time we can only state that this is a candidate for the most distant object ever seen. However, lets let Phil have the last word on this one …

Finding objects like MACS0647-JD is critical to our understanding of the universe. They tell us what things were like when the universe was a mere whippersnapper, something that’s very hard to do otherwise. We can learn how much gas was around back then, what stars were like, how galaxies formed, and even how great the effects of mysterious dark matter and dark energy were, about which very little is known. This new galaxy pushes the limits so hard that everything we learn from it is new.

Plus, it’s just so darn cool! Look at it again, it may just look like a lumpy red blob, but it’s telling us a vast amount about the entire universe we live in. Nothing lives in isolation, no scientific fact sits alone. Everything we see, everywhere, has an impact on what we understand. Even a tiny ball of stars 133 billion trillion kilometers away.