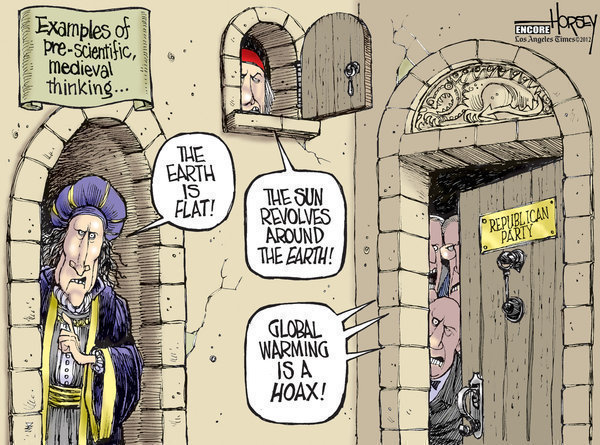 When faced with climate denial, the robust evidence-based facts are easily available and well presented by many sources. Today I’ll point you at a few of these and list out the myths addressed. If there are any listed that you would like to understand a bit more, then simply click the link and check out the details.

Within an article published on a Canadian website climate scientist Katharine Hayhoe debunks the six most common myths she hears. To be precise, she specifically addresses these 6 …

Wait a second, why would the WWF care about addressing climate denial?

Basically because one in six species is at risk of extinction if we don’t get things under control. Their mission is to improve the relationship between people and the natural world. Right now the greatest threat they face for that is climate change. If they resolved every other issue they encounter and did not address this one then they will ultimately and rather inevitably fail.

Their list is long, very long, and runs to hundreds of items. I’ve restricted myself to pulling out their top 12. The one line responses are clickable links that take you to a far longer explanation.

It really should not be a partisan issue, and yet it is. One side is quite literally rejecting evidence-based science and channels climate denial arguments instead.

Congresswomen Alexandria Ocasio-Cortez gave an impassioned speech this past week during a committee hearing in response to Republicans push-back on her climate change policy, the Green New Deal. ‘You want to tell people that their desire for clean air and clean water is elitist?’, she yelled. ‘Tell that to the kids in the South Bronx which are suffering from the highest rates of childhood asthma in the country … You’re telling those kids that they are trying to get on a plane to Davos? People are dying!‘

WHICH WILL MELT FIRST—GOP’S CLIMATE DENIAL, OR THE POLAR ICE CAPS?

Michael E Mann, the well-known climate scientist from Penn state, has published the above article within Newsweek this week on 28th March 2019.

…the real rift within the Republican Party; between those who acknowledge the reality of climate change and those still trapped in the mental prison of denial….

…While there are still those, like Sen. Mike Lee who advanced the silliest of bad faith arguments(that the solution is having more babies and waiting for them to solve the problem,) there are others who have begun to acknowledge that we need to do something about climate change.

As GND spearhead Alexandria Ocasio-Cortez explained in an instantly-viral clip, caring about climate change is a matter of caring for regular Americans across the country. Though some still trot out the old denialist talking point that environmentalism is a hobby for the Davos-going elites, it’s all of us, but especially the poor and most vulnerable who are the hardest hit.

The people of Puerto Rico, Texas and Florida, who were hit by a string of hurricanes made worse by global warming last year. The folks in Paradise California who literally lost their entire town in one of the worst wildfires in history. The children in inner cities who choke on exhaust and struggle with asthma attacks inflamed by the effects of warming. The agricultural workers sweating in the summer heat that’s only getting hotter, and increasing their risk of heat stroke as they harvest our meals. They aren’t making big bucks; but you know who is? The fossil fuel industry….

So here is what is really in play.

For decades, fossil fuel money has kept Republicans from taking a sane position on climate change. And it still is—senators who voted “no” to the GND resolution have received over 11 times more money from the fossil fuel industry than those who voted “present.” Those who voted against the resolution have received an incredible $55 million in contributions from the fossil fuel industry over their career, according to Center for Responsive Politics. And it’s obvious what that money is buying.

If you are indeed buying into the myths, then you really should hit pause. Not simply because the arguments presented by the denialist lobby don’t withstand any critical analysis, but because those making the arguments have been bought and paid for.