It was originally published in the Mail on Sunday, and then re-published within the Daily Mail.

The comments section under it is exactly what you might expect it to be, and is basically climate change deniers pointing to the article and giving the verbal finger to anything and everything global warming related.

James Delingpole comes into the mix, picks up the Daily Mail article, simply laces it with a few snippets, and puts out a Breitbart article with this same claim.

Responses to the Claim

In context, if we are simply polite and impartial about it, then the very very best we can say is that it is a good example of how to cherry-pick data to fit a specific conclusion. Basically it just picks one record, ignores the limitations of it, then crafts a conclusion on a small segment, just a couple of months worth of data.

This is more or less the equivalent of comparing temperatures in say July and August, then tracking the trend from then until the following February as evidence that Global Temperatures are dropping not climbing … yes, the “science” behind this article really is that silly.

I’ll get into the precise details later … but first …

Who are these players in the game here?

The Daily Mail itself does not care about the facts, their agenda is to churn out stuff that draws clicks. They are all about advertising revenue.

David Rose, the author of the Daily Mail article, sometimes writes good stuff, for example his human rights articles are notable and praiseworthy. Unfortunately his stance on Climate change is seriously flawed. The problem is his over-reliance on unsound and unscientific sources. He has a long track record of getting it consistently wrong. The UK’s Met Office often find that they have to issue rebuttals to his various climate change articles, for example here, and here and here and here, etc… When it comes to human rights, then pay attention, but when it comes to climate change, alas no, he consistently gets it very wrong.

As for the Breitbart article. The name James Dellingpole will be immediately familiar to many. He was once taken to task for the nonsense he spouts within an episode of BBC’s Horizon. There Delingpole famously admitted that he never reads scientific papers and called himself “an interpreter of interpretations.”.

The US House Committee of Science and Technology really is the official twitter account of a US government committee and is not parody or a spoof account. The committee is chaired by Congressman Lamar Smith (R-Tex.). If you are familiar with US politics then you will be potentially aware that he is a well-known climate change denier who has been abusing his position as chair to promote his specific anti-science agenda …

None of these people within this chain of myth-information are credible sources, and none of them has a reputation for writing or maintaining a credible evidence-based position when it comes to climate science.

This is a classical fake news story that has gone viral.

Rebuttals to the claim itself via “Climate Feedback”

Climate Feedback is a worldwide network of scientists who collectively assess the credibility of influential climate change media coverage. They have a first class rebuttal to this Daily Mail article from numerous subject matter experts. The site is hosted by the University of California.

To be 100% clear, they do not have a specific political agenda, but instead wish to simply and clearly explain whether and why information is or is not consistent with the science. They apply this to any source. Their writers each holds a Ph.D. and has recently published articles in top-tier peer-reviewed science journals.

This is not just fact-checking, but instead takes that to the next level by crowdsourcing directly from experts with relevant expertise, providing in-depth analysis.

They have seven scientists who carefully reviewed the Daily Mail article. Together they estimated its overall scientific credibility to be ‘very low’.

Here is their overall summary …

Zeke Hausfather, Research Scientist, Berkeley Earth:
This is an incredibly misleading article. It cherry picks a dataset taking measurements 2 miles up in the atmosphere only over land areas that disagrees with the other two datasets that examine the same values. The author of the dataset they use specifically warns against using it due to errors in measurement times. Literally all other surface and satellite datasets show no corresponding massive decline, either over land or globally. The author is taking a normal modest cooling at the end of a large El Niño event and spinning it completely out of proportion.
In reality, 2014, 2015, and 2016 have been the three warmest years on record not just because of a large El Niño, but primarily because of a long-term warming trend driven by human emissions of greenhouse gases. The modest decline in temperatures in recent months from the peak of the El Niño event is completely in line with what has happened during past large El Niño events and was expected by scientists.

Stephan Lewandowsky, Professor, University of Bristol:
This article is flawed to perfection. Mr. Rose made the following inadvisable choices:
1. Ignore the surface temperature record and use only satellite data. Satellites do not measure temperature, they measure microwave radiation, which can be related to an estimate of temperature by use of a computer model. The resulting estimate is, however, not only of temperature at the surface of the Earth—which is where we live—but includes temperature at altitudes of thousands of feet—where no one is trying to farm or grow tomatoes.
2. Ignore two-thirds of the satellite record. Most of the Earth is covered in ocean, and global warming is called global warming because it is global—that is, it includes the oceans.
3. Ignore the trend and focus on two data points. A long-standing trick of people who deny the overwhelming scientific consensus regarding climate change is to cherry-pick isolated observations. The only way to support the claim of a 1-degree drop in the satellite record is by comparing February 2016 to October 2016. This drop, however, is merely weather that is superimposed on the long-term climatic trend.

Steven Sherwood, Professor, University of New South Wales:
The discussion in the article of a disagreement among scientists as to whether the record-breaking global heat in 2015 and again in 2016 was “due to El Niño” vs. “due to global warming” is completely bogus. Both global warming and El Niño, added together, produced these records. El Niño by itself could never have produced such a warm planet as we have now. Everyone, including NASA’s Gavin Schmidt, has been pointing out for some time that temperatures would dip for a while once the El Niño faded, but that’s just a bump on the road to a warmer and warmer planet.

These comments are the overall opinion of scientists on the article, they are substantiated by their knowledge in the field and by the content of the analysis in the annotations on the article.

Benjamin Horton, Professor, Rutgers University:
The claim that global land temperatures have plunged by a record margin is false because: (1) the author cherry picks the data, relying on the satellite record of Earth’s temperature, which only dates to 1978 rather than the surface temperature record which dates to the 19th century. Using the full dataset the decrease in land-based temperature is NOT a record drop; (2) the author IGNORES THE OCEANS. When combining both the land and ocean, there is not a record fall in the satellite record; and (3) the surface temperature record shows an unmistakably upward trend, irrespective of year-to-year wiggles.

Victor Venema, Scientist, University of Bonn, Germany:
It is a pity the rating scale does not allow for rating below “very low”. Had the article honestly shown a graph of the global surface temperature increase in the last century every reader would have seen how deceptive David Rose’s article is.

Kyle Armour, Assistant Professor, University of Washington:
It is well known that global temperature falls after receiving a temporary boost from El Niño. The author cherry-picks the slight cooling at the end of the current El Niño to suggest that the long-term global warming trend has ended. It has not.

They also go into it all in a lot more detail and explain, step by step, exactly why the Daily Mail article is seriously flawed.

Sadly we live in an age where myths are propagated as “truth”, and evidence-based facts are dismissed as myth.

To some degree we have always been like this, and so what is perhaps new is that the Internet has opened up a far more effective means for this to happen. It does also however not only create a conduit for myths, but an opportunity for subject matter experts to reach out directly with a solid robust irrefutable rebuttal.

Least you doubt reality, here is a graph.

Way beyond one El Niño fluctuation, the evidence for global warming is abundantly clear. Just look back at the trend that spans decades … 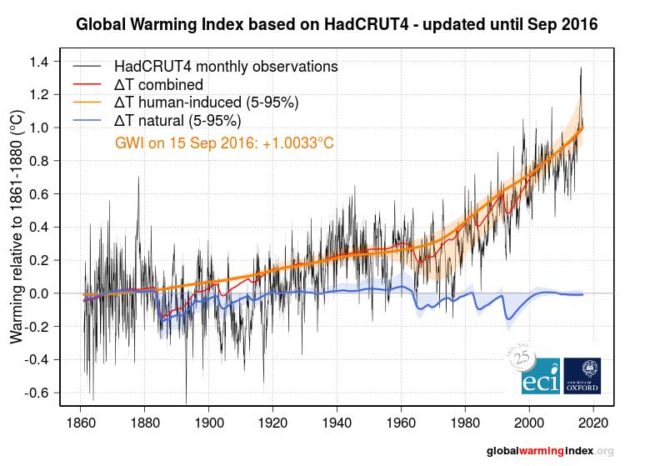 Meanwhile we have reactions to the US House Committee tweet

Luckily many are not buying fake news anymore …

Jesus. The House Science Committee just cited a false Breitbart report that the climate is cooling.
Our Orwellian future is here. https://t.co/KY6CE8JqJz

This committee should have its decision-making privileges revoked for one month. And no Twitter. You're grounded.

.@HouseScience congratulations on taking meretricious balance to a new level of stupid by not bothering to give the consensus view at all.

and so the erosion on science begins… https://t.co/88KBddTUbS