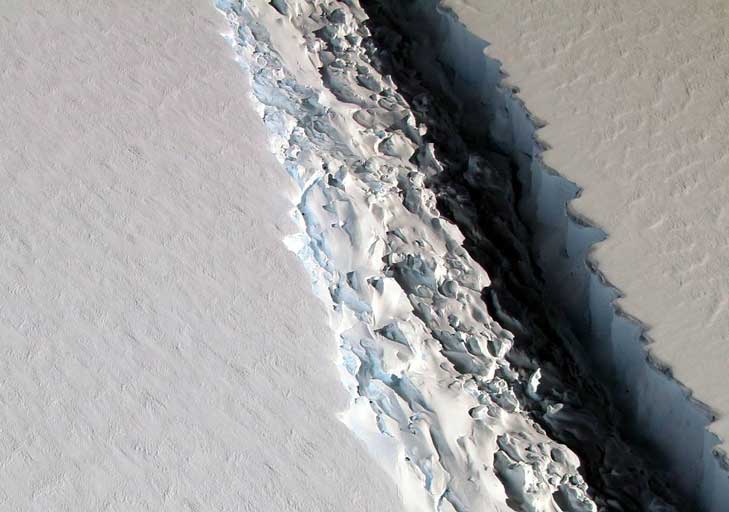 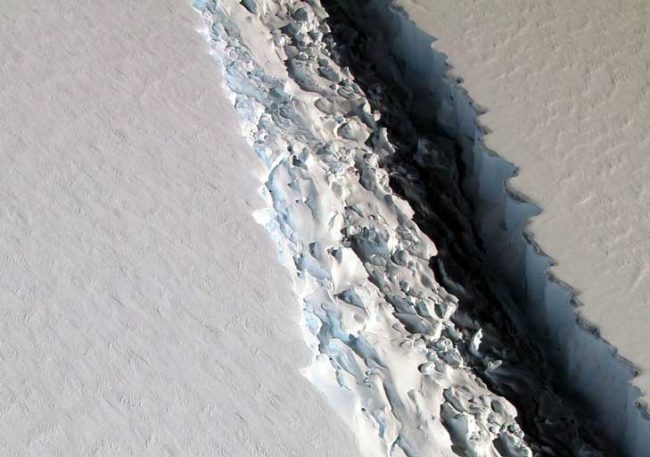 A picture of a massive rift far inland on the Larson C Ice shelf has been published via NASA #ICEBridge (see above).

The goal NASA’s Operation IceBridge is to collect data on changing polar land and sea ice. They have been doing this via a series of flights over the region. This is being done to maintain the continuity of measurements between NASA’s Ice, Cloud and Land Elevation Satellite (ICESat) missions. The original ICESat mission ended in 2009, and its successor, ICESat-2, is scheduled for launch in 2018. Operation IceBridge, which began in 2009, is currently funded until 2019. The planned overlap with ICESat-2 will help scientists validate the satellite’s measurements, and also of course fill the gap created by the ending of ICESat … hence the name #IceBridge.

On Nov. 10, 2016, scientists on NASA’s IceBridge mission photographed an oblique view of a massive rift in the Antarctic Peninsula’s Larsen C ice shelf. They described it as follows …

The IceBridge scientists measured the Larsen C fracture to be about 70 miles long, more than 300 feet wide and about a third of a mile deep. The crack completely cuts through the ice shelf but it does not go all the way across it – once it does, it will produce an iceberg roughly the size of the state of Delaware.

Where exactly is this? 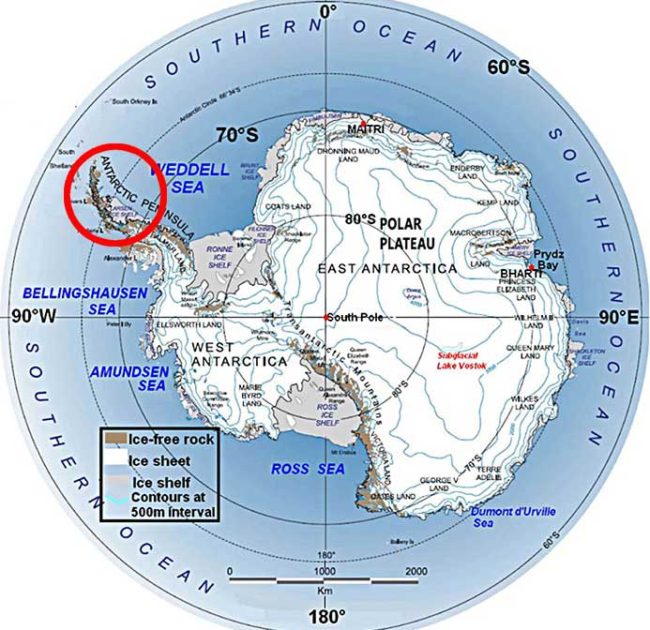 We have in one sense been here before. Larson C is the last remaining part of the ice shelf.

Larson A disintegrated in January 1995. That was witnessed …

In 1995, 10 argentine soldiers witnessed a cataclysm that no other humans have ever seen, one that has since altered our understanding of climate change.

The men were stationed at Matienzo Base, a dreary cluster of steel huts that sat atop a wedge of volcanic rock jutting from the sea, 50 kilometers off the coast of Antarctica. The island was surrounded by a plain of glacial ice covering 1,500 square kilometers—25 times the area of Manhattan. Although the ice shelf floated on the sea, it was 200 meters thick—as solid as bedrock. Yet Captain Juan Pedro Brückner sensed that something was wrong. Meltwater had formed ponds that dotted the ice. He could hear a gurgling sound as the water seeped down into a network of descending cracks. Day and night, Brückner’s men heard deep convulsions that sounded like subway trains passing underneath their beds. The rumbles grew more and more frequent.

Then one day, while the crew ate lunch inside one of the huts, they were blasted by a boom—“calamitously loud, like a volcano blowing up,” Brückner recalls. They ran outside. The ice shelf bordering their little island was breaking apart. The upheaval was so violent they feared the fracturing ice would tear the island from its foundation and roll it like a log into the ocean. They placed instruments by their feet to warn them if the ground started to tip. After a few tense days the men were evacuated by helicopter to another station 200 kilometers north. The island held, but the map had changed for good.

That event was a huge wakeup call because Larsen B had previously been stable for up to 12,000 years, essentially the entire Holocene period since the last glacial period, according to Queen’s University researchers.

The observation that this happened rapidly in a three week period was a shock because nobody expected something so dramatic to happen at such a pace. Here is what was observed …

Meltwater acts to enhance fracturing of the shelf by filling smaller cracks and forcing them through the thickness of the ice due to the weight of the water. The idea was suggested in model form by other researchers in the past (Weertman, 1973; Hughes, 1983); satellite images have provided substantial observational proof that it is in fact the main process responsible for the Peninsula shelf disintegrations.

And here is what happened …

Now we are seeing signs that Larson C is going the same way. 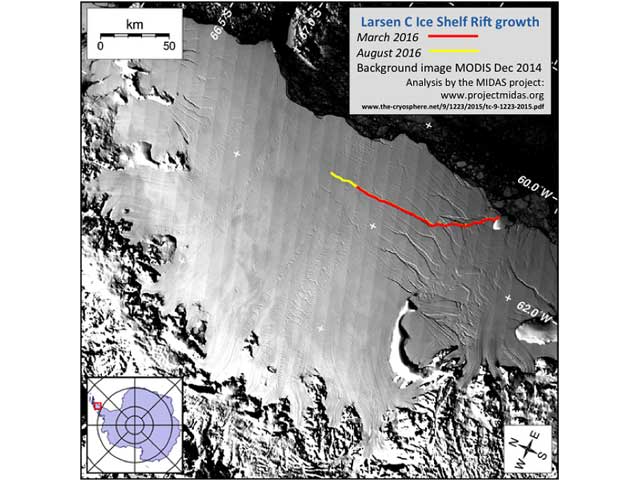 Why does any of this matter?

Once an ice shelf disappears, towering glaciers that had piled up behind it in fjords along the sea’s edge are free to slide into the ocean. And slide they do, adding substantial volume to the sea.

The concern is not simply understanding why this is now happening, but to also grasp the implications this all has for sea level rise.

The deep worry is that an accelerated melt could push sea level a lot higher and faster than anticipated.