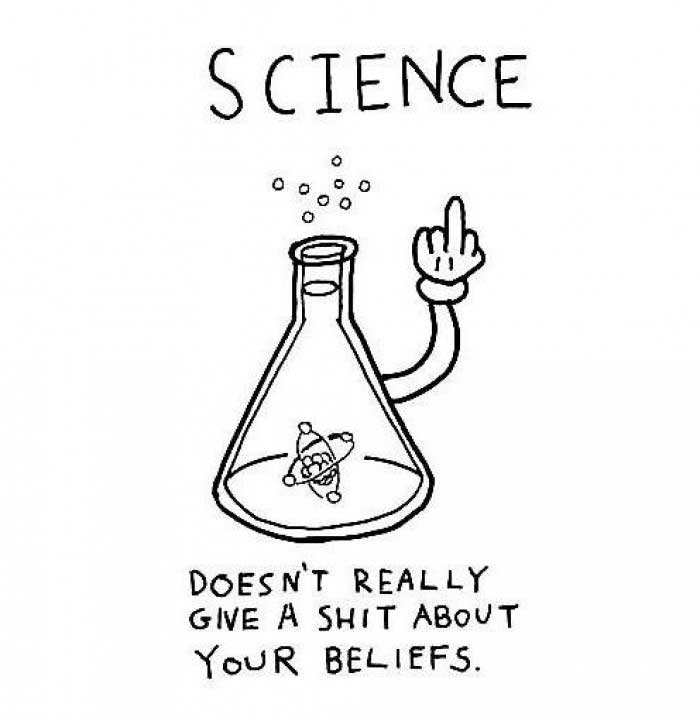 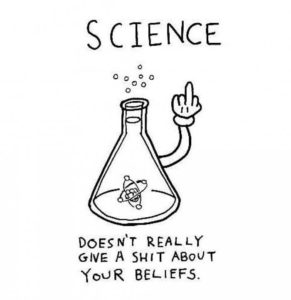 I’d like to point to two specific articles today that are related to the idea of communicating things that are true. Before we dip in, let’s first establish what we mean by “truth”.

In a religious context communication of “truth” is the promotion of ideas that are deemed to be beyond debate, absolutely true, and never wrong. Taken to an extreme you often find that facts and reality simply do not matter. For example the world and the entire universe is indeed just 6,000 years old (according to Answers in Genesis – no seriously, they really believe this, yet we have trees that are older than this), and so any scientific facts that conflict with the belief are discarded as wrong.

In a scientific context we tend to think of scientific truth being evidence-based and objective, which of course it is. The scientific methodology is the most successful means we have for working out what is actually true, and is perhaps the only means we have for doing so. Part of that success is firmly rooted in something that is often not appreciated. Scientific truth is never right, but instead is simply “not wrong”. That might appear to be subtle and hence unimportant, but here rests the heart of it all. All scientific truth is held provisionally. If newer better evidence emerges, then it changes to reflect that new knowledge.

Example: Newtonion Mechanics is not wrong, it works, but it turned out that it was not the full story because there was something more subtle going on, and so we have Einstein’s Relativity. We can get satellites into orbit using the first, but when using the positioning signals from them we can only get GPS to function correctly using the second.

In the context of communicating “truth” what I’m talking about is the communication of ideas that have not been falsified and hence provisionally are robust evidence-based, and objective. It is our very best understanding of how things really are.

Why I Won’t Debate Science

Kate Marvel writes in Scientific American on June 14th about the idea of not debating science.

I refuse to debate basic science in public. There are two reasons for this: first, I’m a terrible debater and would almost certainly lose. The skills necessary to be a good scientist (coding, caring about things like “moist static energy”, drinking massive amounts of coffee) aren’t necessarily the same skills that will convince an audience in a debate format. It is very fortunate that things like the atomic model of matter do not rest on my ability to be charming or persuasive.

But second, and maybe more importantly: once you put facts about the world up for debate, you’ve already lost. Science isn’t a popularity contest; if it were, I’d definitely vote to eliminate quantum mechanics, set π to 1, and put radium back in toothpaste. I really, really don’t want sea levels to rise, rainfall patterns to shift, and heat waves to intensify. Climate change is definitely not my first choice. But physics and chemistry don’t care what I, or anyone else, wants.

It is of course wholly appropriate for the scientific community to debate scientific papers. As people present a new finding they will of course be challenged by knowledgable peers … “Have you though about …”, “What about …”, “Would x not be a better explanation for …”. “Why did you choose to …”, etc… That’s not what she is on about, but instead this …

Too often, we scientists find ourselves asked to “debate” people who believe (simultaneously) that the Earth is cooling, that it’s warming but the warming is natural, that the warming is human-caused but beneficial, and that NASA somehow made it all up in between faking moon landings and covering up alien abductions. These things cannot all be true.

So the point is this – we don’t get to vote on reality. The things that are true remain true even if nobody accepts them.

The moment you share a platform with some nut touting something that simply has no evidence is the moment that you are granting  it equality. The problem is that the stuff that is not evidence-based and not objective does not merit such recognition.

Communicate with Passion and Humanity

Eve Andrews writes in Grist a very long article about Sarah Myhre, a scientist and Climate advocate that is worth reading in full. I can only pluck out a few minor nuggets here, but even those are simply shadows to the gold that resides within.

She starts off by describing Sarah Myhre as …

a passionate advocate for climate action and social justice whose voice reaches far beyond the staid confines of academia. To her detractors, she is a “climate alarmist.”

But the debate over the role scientists should play in public discourse goes far beyond Myhre. It strikes at the heart of what it means to be a scientist in the age of Trump. As the world watches the U.S. government withdraw from the Paris Agreement and extend lifelines to the coal industry, many in academia are asking: Should climate scientists be publicly advocating for climate action?

So the point is this …

While traditionalists caution loudly against damaging one’s credibility by opining about what is, at heart, scientific phenomena, a new breed of scientist believes that it has a social and moral obligation to save the planet. These upstarts feel that it would be a violation of the social contract to not translate the severity of the climate crisis in terms the public can relate to and be moved by. They’re the descendants of scientists like James Hansen, who 30 years ago this week sounded the alarm on climate change to Congress — and eventually resigned his position studying warming at NASA to become an activist.  And the traits that would typically stymie Myhre and her peers in the staid scientific arena, still dominated by male scholars in their ivory towers, may turn out to be their most formidable strengths in a highly politicized era.

“I think you can be both rigorous and objective and be human at the same time,” Myhre tells me. “And I have come to a place where I’m no longer willing to divorce my humanity from the science that I have participated in and am stewarding.”

She is also not alone. Others have come to the same position. Writing about climatologist and geophysicist Michael Mann, Eve explains the insights he gained …

“When we first published our hockey-stick work in the late 1990s, I was of the belief that the role of a scientist was, simply put, to do science,” Mann wrote in his 2015 memoir, The Hockey Stick and the Climate Wars.

He thought scientists needed to remain “dispassionate” in discussing their analysis of the climate, wringing empathy and emotion from their communication. But after his Senate appearance, he was the subject of a hacking attack by oil interests where his correspondence with other climate scientists was intentionally misrepresented. Once he realized the stakes involved, he says his feelings evolved. “Everything I have experienced since then has gradually convinced me that my former viewpoint was misguided,” he wrote in a 2014 New York Times op-ed.

Good effective passionate scientific advocacy is not new, there is an existing legacy. A prime example of that is perhaps Carl Sagan. He not only effectively communicated scientific truth, but he also inspired and ignited a deep passion and love of science within meany hearts. Perhaps a prime example of this is Pale Blue Dot.

Initially Voyager 1 was expected to only work until it reached Saturn. When the spacecraft passed the planet in 1980, Sagan proposed the idea of the space probe taking one last picture of Earth. They went for it and took the picture. The result was poetry … 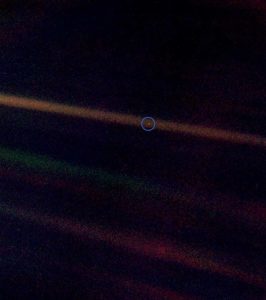 We succeeded in taking that picture [from deep space], and, if you look at it, you see a dot. That’s here. That’s home. That’s us. On it, everyone you ever heard of, every human being who ever lived, lived out their lives. The aggregate of all our joys and sufferings, thousands of confident religions, ideologies and economic doctrines, every hunter and forager, every hero and coward, every creator and destroyer of civilizations, every king and peasant, every young couple in love, every hopeful child, every mother and father, every inventor and explorer, every teacher of morals, every corrupt politician, every superstar, every supreme leader, every saint and sinner in the history of our species, lived there on a mote of dust, suspended in a sunbeam.

The Earth is a very small stage in a vast cosmic arena. Think of the rivers of blood spilled by all those generals and emperors so that in glory and in triumph they could become the momentary masters of a fraction of a dot. Think of the endless cruelties visited by the inhabitants of one corner of the dot on scarcely distinguishable inhabitants of some other corner of the dot. How frequent their misunderstandings, how eager they are to kill one another, how fervent their hatreds. Our posturings, our imagined self-importance, the delusion that we have some privileged position in the universe, are challenged by this point of pale light.

Our planet is a lonely speck in the great enveloping cosmic dark. In our obscurity – in all this vastness – there is no hint that help will come from elsewhere to save us from ourselves. It is up to us. It’s been said that astronomy is a humbling, and I might add, a character-building experience. To my mind, there is perhaps no better demonstration of the folly of human conceits than this distant image of our tiny world. To me, it underscores our responsibility to deal more kindly and compassionately with one another and to preserve and cherish that pale blue dot, the only home we’ve ever known.

— Carl Sagan, speech at Cornell University, October 13, 1994
Effective communication of scientific truth is not simply about instilling the best possible understanding of reality, but is also about deploying it with a passion and enthusiasm that wins both hearts and minds.