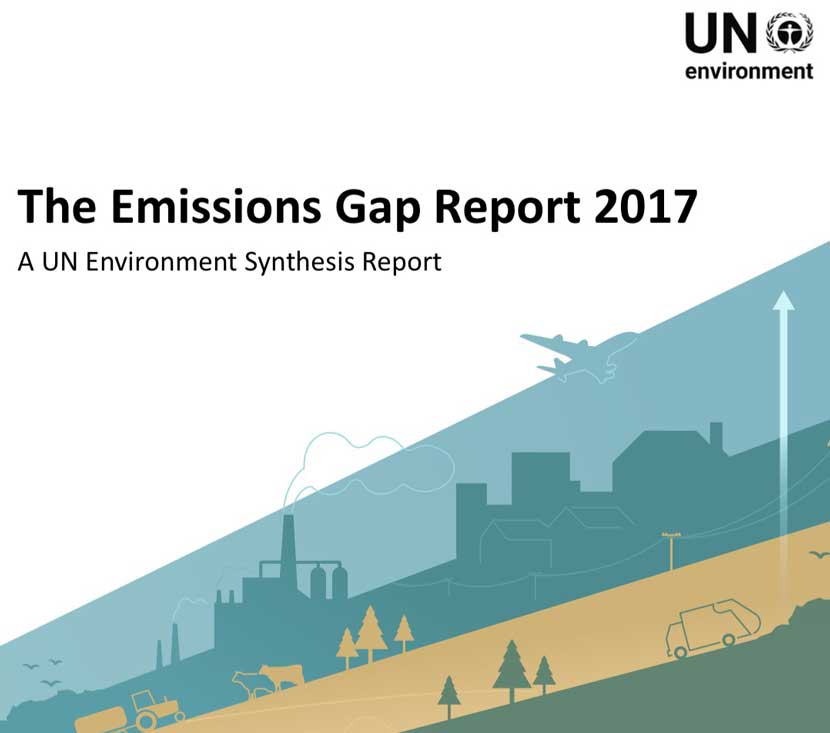 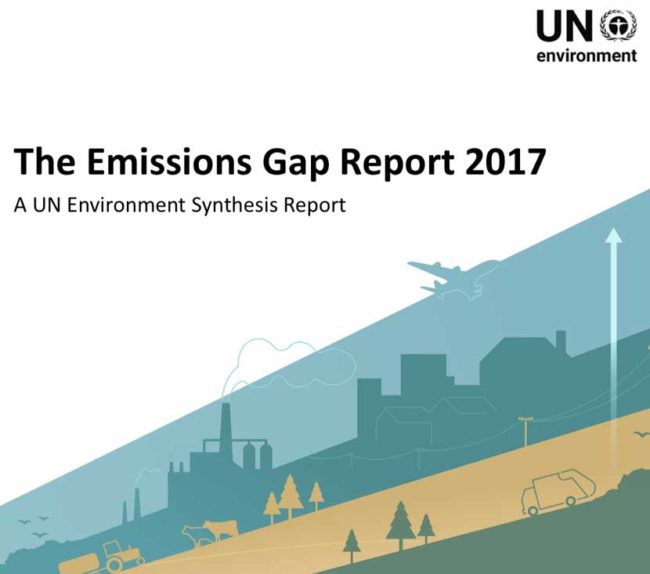 In yesterday’s posting about the new WGO Greenhouse Gas Bulletin that highlights where we stand with measurements of the Climate Change inducing greenhouse gas emissions, the big highlight is that the rate at which CO2 is increasing has accelerated. This insight quite naturally feeds into the topic for today – the latest 2017 UN Emissions Gap report.

The event that is driving all this is the next conference of parties to the UN Climate Change Convention. It is taking place 6-17 November in Bonn, Germany and will be presided over by the Government of Fiji. The delegates need good solid robust data as input to help drive the evidence-based decisions needed to address what is perhaps the most pressing challenge our species has ever faced. In the long view this meeting will be the most important event in 2017 and that will remain true long after the words “Trump” and “BREXIT” have faded from human memory.

Key Message – We are not doing enough, but we can bridge the gap 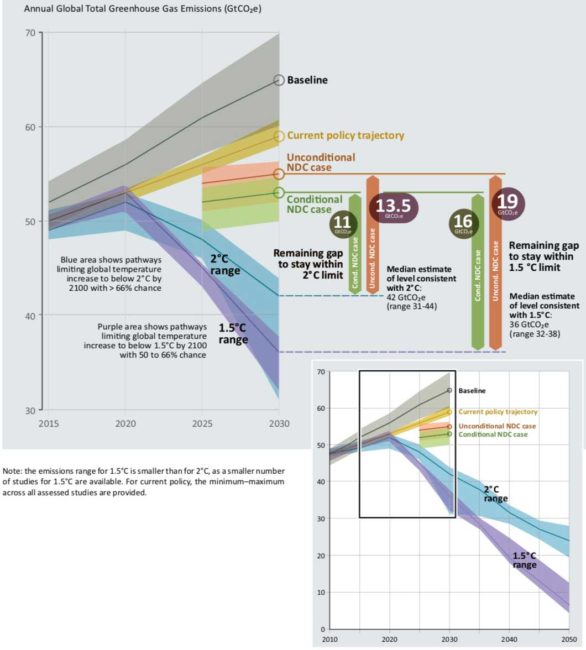 It is not about bluster or political theatre, instead it is focused on the actual existential threat we face. We  need to take more decisive steps, because right now what has been pledged is not enough …

Governments and non-state actors need to deliver an urgent increase in ambition to ensure the Paris Agreement goals can still be met, according to a new UN assessment.

The eighth edition of UN Environment’s Emissions Gap report, released ahead of the UN Climate Change Conference in Bonn, finds that national pledges only bring a third of the reduction in emissions required by 2030 to meet climate targets, with private sector and sub-national action not increasing at a rate that would help close this worrying gap.

The Paris Agreement looks to limit global warming to under 2oC, with a more ambitious goal of 1.5oC also on the table. Meeting these targets would reduce the likelihood of severe climate impacts that could damage human health, livelihoods and economies across the globe.

As things stand, even full implementation of current unconditional and conditional Nationally Determined Contributions makes a temperature increase of at least 3 oC by 2100 very likely – meaning that governments need to deliver much stronger pledges when they are revised in 2020.

Should the United States follow through with its stated intention to leave the Paris Agreement in 2020, the picture could become even bleaker.

So what can we actually do?

Investing in technology key to success

To avoid overshooting the Paris goals, governments (including by updating their Paris pledges), the private sector, cities and others need to urgently pursue actions that will bring deeper and more-rapid cuts.

The report lays out ways to do so, particularly in agriculture, buildings, energy, forestry, industry and transport. Technology investments in these sectors – at an investment cost of under $100 per tonne of CO2 avoided, often much lower – could save up to 36 GtCO2e per year by 2030.

Much of the potential across the sectors comes from investment solar and wind energy, efficient appliances, efficient passenger cars, afforestation and stopping deforestation. Focusing only on recommended actions in these areas – which have modest or net-negative costs – could cut up to 22 GtCO2e in 2030.

These savings alone would put the world well on track to hitting the 2oC target, and unlock the possibility of reaching the aspirational 1.5oC target.

Non-state action and other initiatives

Actions pledged by non-state and sub-national bodies (such as cities and the private sector) could reduce the 2030 emissions gap by a few GtCO2e, even accounting for overlap with Nationally Determined Contributions. The world’s 100 largest emitting publicly traded companies, for example, account for around a quarter of global greenhouse emissions, demonstrating huge room for increased ambition

The Kigali Amendment to the Montreal Protocol aims to phase out the use and production of hydrofluorocarbons – chemicals primarily used in air conditioning, refrigeration and foam insulation. If successfully implemented, it kicks-in too late to impact the 2030 gap, but can make a real contribution to reaching the longer-term temperature goals.

By mid-century, reductions in short-lived climate pollutants, such as black carbon and methane, could help reduce impacts that are based on cumulative heat uptake and help to ensure a steady and lower temperature trajectory towards the long-term Paris goals.

There are people with Vision – Example: Enel an Italian Power company

“Enel is committed to achieve 100% CO2-free power generation by 2050 and the pathway we’ve chosen to reach this target is to create self-sustaining ecosystems where renewable generation is combined with storage and electric mobility within intelligent networks capable of operating and balancing power flows autonomously.”

“Reducing the global emissions gap on the way to achieving a zero emission society requires a faster implementation of this new vision of the electricity system through sustainable innovation driven by the open cooperation of all relevant stakeholders, from utilities to research, startups, governments, international bodies and the civil society. This transition is proving to be financially as well as environmentally sound and we at Enel are glad to have embarked upon this journey and always looking forward to the future opportunities it will entail.”

What needs to happen?

Avoiding new coal-fired power plants and accelerated phasing out of existing plants – ensuring careful handling of issues such as employment, investor interests and grid stability – would help. There are an estimated 6,683 operating coal-fired power plants in the world, with a combined capacity of 1,964 GW. If these plants are operated until the end of their lifetime and not retrofitted with Carbon Capture and Storage, they would emit an accumulated 190 Gt of CO2.

In early 2017, an additional 273 GW of coal-fired capacity was under construction and 570 GW in pre-construction. These new plants could lead to additional accumulated emissions of approximately 150 Gt CO2. Ten countries make up approximately 85% of the entire coal pipeline: China, India, Turkey, Indonesia, Vietnam, Japan, Egypt, Bangladesh, Pakistan and the Republic of Korea.

The report also looks at CO2 removal from the atmosphere – through afforestation, reforestation, forest management, restoration of degraded lands and soil carbon enhancement – as an option for action.

Additionally, a new report released by the 1 Gigaton Coalition on the same day shows that partner-supported renewable energy and energy efficiency projects in developing countries can cut 1.4 GtCO2e by 2020 – provided the international community meets its promise to mobilize US$100 billion per year to help developing countries adapt to climate change and reduce their emissions.

“As renewable energy and energy efficiency bring other benefits – including better human health and jobs – I urge the international community to deliver on the funding they promised to support developing nations in their climate action,” said Ms Ine Eriksen Søreide, Norway’s Minister of Foreign Affairs. “Partner-supported renewable energy and energy efficiency projects and policies are vital for global decarbonization, as they provide key resources and create enabling environments in critical regions.”

The 1 Gigaton Coalition is supported by UN Environment and the Norwegian Government.

Towards a pollution-free Planet report

The benefits of a low-carbon society on global pollution – by, for example, cutting the millions of air pollution-related deaths each year – are also clearly illustrated in Towards a pollution-free planet, a report by the UN Environment Executive Director that will be presented at the upcoming United Nations Environment Assembly. The report lays out an ambitious framework to tackle pollution, including through political leadership, moving to sustainable consumption and production and investing big in sustainable development.

You can download the full UK Emissions Gap Report here. (Be aware that is is quite large and detailed).