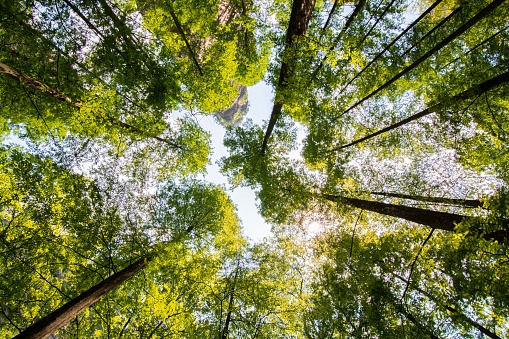 We often tend to think of Climate Change being about weather extremes. Examples include heatwaves, or perhaps sea level rise. Like many things, it is a lot more complicated. There are other consequences. A recently published paper within Nature Plants reveals how a changing climate is impacting seed production.

Let’s do a quick review.

Published on 10th Feb 2020, it lays out the details of research conducted by the UK University of Liverpool. It reveals the effect of climate warming on the complex interactions between beech trees and the insects that eat their seeds.

Before we get into it I better define a word – masting or mast. In a biological context, “mast” is the fruit of the forest such a acorns and other nuts. At regular intervals Mast is generated in large quantities. This is known as “Masting”. These pulses of masting contribute to many ecosystem-level functions and dynamics.

Masting is beneficial to the trees. During `famine years’, seed-eating animals (such as moths) are starved so their numbers decrease. In the `bumper years’, seed production is so high that it satiates insects and seed predators. Seeds can survive to establish the next generation of trees.

OK, back to the new study.

What did the researchers do?

Here, using a 39-year-long dataset, we show that climate warming over recent decades has increased seed production of European beech but decreased the year-to-year variability of seed production and the reproductive synchrony among individuals.

What are the consequences of this?

The benefit that the plants gained from masting has declined. While climate warming was associated with increased reproductive effort, we demonstrate that less effective pollination and greater losses of seeds to predators offset any benefits to the plants.

This shows that an apparently simple benefit of climate warming unravels because of complex ecological interactions. Our results indicate that in masting systems, the main beneficiaries of climate-driven increases in seed production are seed predators, not plants.

What exactly is going on here, how has climate impacted Masting?

Co-author of the paper, Dr Andrew Hacket-Pain, from the University of Liverpool’s School of Environmental Sciences, said:

“This study is important for understanding how beech trees are responding to changes in the climate: Climate change is leading to an increase in the seed production of beech trees – but we show that any benefit the trees might gain from this increased reproductive effort has been almost entirely offset by higher seed consumption by the moth larvae.”

“The trees are producing more seeds but gaining almost no return on their increased investment. It is an excellent example of how the overall response of forests to climate change is dependent on a complex web of interactions between species – it is far from straightforward.”

“In this research, we use data from four decades of long-term monitoring to investigate how climate change has affected the reproduction of one of the UK’s most widespread trees, beech. We show that seed production has increased over that time period – but this does not tell the whole story.”

“This study focused on the main seed predator of beech, a specialist moth (Cydia fagiglandana), whose larvae feed on the developing beech seeds. Frequent ‘famine years’ enable the beech trees to suppress populations of this seed-eating insect.

“However, the disappearance of the characteristic ‘boom and bust’ seed production patterns in UK beech trees has led to an increase in moth populations. As a result, we have seen a dramatic increase in the percentage of the seeds that are eaten by the larvae – up from around 1% in the 1980s to 40% in recent years.”

The study paper sums it all up as follows …

The changes in masting patterns reported in this study will have profound implications for the long-term future of European beech.

In northern Europe where beech is predicted to expand northwards under climate warming, our results hint that a breakdown in masting might result in recruitment limitation. This emphasizes the importance of including realistic reproduction processes within forest models.

Similar processes may explain observed declines in beech recruitment elsewhere in Europe. More generally, our results imply potential climate-driven changes in the dynamics of beech-dominated ecosystems, including the spread of Lyme disease and hantavirus by rodents dependent on beech seeds, habitat selection of ground-nesting birds and population dynamics of small mammal predators.

Similar changes are likely to occur in other masting species, with other negative conservation conse- quences, but such long-term datasets as the one reported here are extremely rare. Thus, experiments to better understand the mechanisms underlying masting, and consequently better predict the consequences of a changing climate for plant reproductive patterns and global vegetation dynamics, should become a research priority.

The net benefits of climate warming in the European beech system studied here accrue largely to an invertebrate seed predator, which suggests that ecological interactions may determine the real- world consequences of global change.