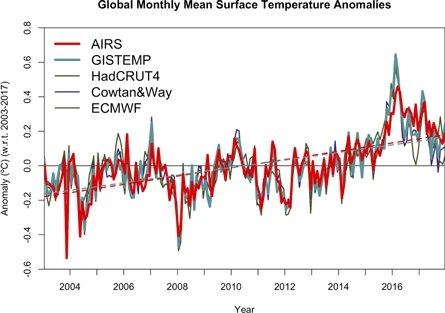 Independent confirmation of recent global warming has just been confirmed.

One line of evidence that we have is the station-based analyses of surface air temperature (principally the Goddard Institute for Space Studies Surface Temperature Analysis (GISTEMP)). We now have a new dataset – the Atmospheric Infra-Red Sounder (AIRS) surface skin temperature anomalies for the period 2003 through 2017.

Key Point: AIRS surface temperatures are completely satellite-based and are totally independent of any surface-based measurements

As you can see from the graph above, if you put them side by side they align. This verifies the accuracy of recent global warming figures.

The AIRS instrument flies on EOS Aqua, which was launched in 2002 and became stable in September 2002.

The NASA authors show within this paper that satellite-based surface temperatures can serve as an important validation of surface-based estimates and help to improve surface-based data sets in a way that can be extended back many decades to further scientific research. AIRS surface temperatures have better spatial coverage than those of GISTEMP, though at the global annual scale the two data sets are highly coherent. As in the surface-based analyses, AIRS now independently confirms that 2016 was the warmest year yet.

“AIRS data complement GISTEMP because they are at a higher spatial resolution than GISTEMP, and have more complete global coverage.

“Both data sets demonstrate the earth’s surface has been warming globally over this period, and that 2016, 2017, and 2015 have been the warmest years in the instrumental record, in that order.

“This is important because of the intense interest in the detail of how estimates of global and regional temperature change are constructed from surface temperature data, and how known imperfections in the raw data (due to station moves, gaps, instrument and practice changes, urban heat island effects) are handled.”

“Interestingly, our findings revealed that the surface-based data sets may be underestimating the temperature changes in the Arctic. This means the warming taking place at the poles may be happening more quickly than previously thought.

“Our work also shows that complementary satellite-based surface temperature analyses serve as an important validation of surface-based estimates. They may point the way to make improvements in surface-based products that can perhaps be extended back many decades.”

Newsweek conducted an interview. Below is an extract of a couple of the questions from their Q&A with Gavin Schmidt, one of the authors of the study, from the Goddard Institute …

What are the implications of these findings? Why are they significant?
Not only is this a further confirmation that the world is warming over the last two decades—which really isn’t needed—but it is an independent confirmation that the magnitudes of the assessed changes are accurate, and possibly even a little underestimated. This is a clear demonstration of the utility of the multiple views of the Earth enabled by NASA science.

Do you think findings such as these can go any way to addressing the issue of climate change skepticism?
Well, since most climate scepticism has nothing much to do with facts, demonstrating that those facts are robust probably won’t make a dent. However, it is a good data point for people who might have genuine questions about how accurate the global warming trends are.

Here are a couple of tweets from NASA and also one of the authors of the published dataset (The lead author, Joel, does not appear to be on Twitter, it is just Gavin who is) …