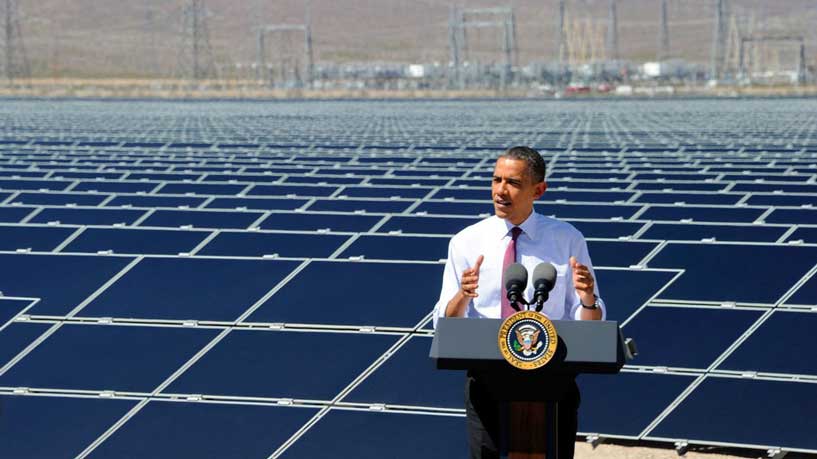 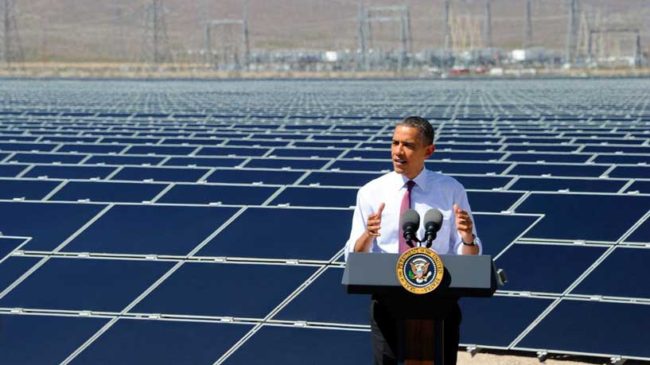 As part of his closing act, President Obama has been outlining the dire risks associated with abandoning his policies …

In a recent article in the New England Journal of Medicine, he warned of the risks to millions of Americans of repealing the Affordable Care Act without an adequate replacement. In the Harvard Law Review, he touted his administration’s criminal justice reforms

The latest example of this is an article within the highly respected journal “Science” entitled “The irreversible momentum of clean energy“.

You might quibble and make the observation that he is not a scientist, and that law is his area of expertise, but he is not making a scientific case, rather an economic one. In short, to use his own words, the argument he presents is summed up as follows …

the mounting economic and scientific evidence leave me confident that trends toward a clean-energy economy that have emerged during my presidency will continue and that the economic opportunity for our country to harness that trend will only grow.

Four reasons why the trend toward clean energy is irreversible.

He identifies four economic and wholly practical reasons why clean energy is indeed the best way forward, so let’s briefly sum up each.

The thinking behind Trump’s big oil/coal initiative is the myth that a reduction of greenhouse emissions will lead to economic stagnation. The reality is that Obama’s legacy is one where the US has successfully, for the first time ever, reduced its greenhouse gas emissions and yet at the same time grown the economy.

Specifically, CO2 emissions from the energy sector fell by 9.5% from 2008 to 2015, while the economy grew by more than 10%. In this same period, the amount of energy consumed per dollar of real gross domestic product (GDP) fell by almost 11%, the amount of CO2 emitted per unit of energy consumed declined by 8%, and CO2 emitted per dollar of GDP declined by 18%

It is a rather important point. Previously a halt in the growth of emissions has been associated with economic decline, but this time it is different. The recent halt in emissions growth comes in a period of economic growth. This is also not simply a US trend, it is a global trend, one that confirms that we are starting to address climate change in a truly meaningful way.

He also goes on to point out that the Trump alternative will result in fewer jobs, not more, and lower economic growth, not higher …

One of the most frequently cited economic models pins the estimate of annual damages from warming of 4°C at ~4% of global GDP (4–6), which could lead to lost U.S. federal revenue of roughly $340 billion to $690 billion annually (7).

The second point made is that if you scale down to the level of an individual business, then you discover that there are also considerable financial benefits at that level of focus as well …

For example, Alcoa has set a goal of reducing its GHG intensity 30% by 2020 from its 2005 baseline, and General Motors is working to reduce its energy intensity from facilities by 20% from its 2011 baseline over the same timeframe (12).

This is happening, not because there is a moral case or a scientific case for such a reduction, or even because it is for the greater good of mankind. Instead they are doing this because of the realisation that it cuts costs.

This kind of corporate decision-making can save money, but it also has the potential to create jobs that pay well. A U.S. Department of Energy report released this week found that ~2.2 million Americans are currently employed in the design, installation, and manufacture of energy-efficiency products and services. This compares with the roughly 1.1 million Americans who are employed in the production of fossil fuels and their use for electric power generation (13). Policies that continue to encourage businesses to save money by cutting energy waste could pay a major employment dividend and are based on stronger economic logic than continuing the nearly $5 billion per year in federal fossil-fuel subsidies, a market distortion that should be corrected on its own or in the context of corporate tax reform (14).

3 – MARKET FORCES IN THE POWER SECTOR

Energy production has shifted from coal to natural gas, not simply because natural gas produces lower emissions, but because it is a lower cost means for energy production. Any attempt to persuade the energy producers to switch back to the more costly coal alternative would be ignored.

Yes, the methane by-product from the natural gas approach is a concern, but there is also an economic benefit in place for the energy producers to address that as well.

Renewable electricity costs also fell dramatically between 2008 and 2015: the cost of electricity fell 41% for wind, 54% for rooftop solar photovoltaic (PV) installations, and 64% for utility-scale PV (16). According to Bloomberg New Energy Finance, 2015 was a record year for clean-energy investment, with those energy sources attracting twice as much global capital as fossil fuels (17).

… and even more impressively …

The levelized cost of electricity from new renewables like wind and solar in some parts of the United States is already lower than that for new coal generation, without counting subsidies for renewables (2).

This is the way the wind is blowing, and I mean that quite literally …

Adaptive measures are being taken by as many as 110 nations right across the planet, and if the US walks away from that, then it will continue forward anyway. The implications of a US withdrawal is that it will have an impact, but primarily upon the US itself …

Were the United States to step away from Paris, it would lose its seat at the table to hold other countries to their commitments, demand transparency, and encourage ambition.

… Regardless of U.S. domestic policies, it would undermine our economic interests to walk away from the opportunity to hold countries representing two-thirds of global emissions—including China, India, Mexico, European Union members, and others—accountable.

It is good business and good economics to lead a technological revolution and define market trends. And it is smart planning to set long-term emission-reduction targets and give American companies, entrepreneurs, and investors certainty so they can invest and manufacture the emission-reducing technologies that we can use domestically and export to the rest of the world. That is why hundreds of major companies—including energy-related companies from ExxonMobil and Shell, to DuPont and Rio Tinto, to Berkshire Hathaway Energy, Calpine, and Pacific Gas and Electric Company—have supported the Paris process, and leading investors have committed $1 billion in patient, private capital to support clean-energy breakthroughs that could make even greater climate ambition possible.

His case is well-made and evidence based.

What is seriously being proposed by the new administration is the discarding of a path that yields considerable economic benefits. If they persist and insist, then they will discover a considerable degree of resistance, not simply because clean energy is the necessary thing to do, or the right thing to do, but also because the economic forces that drive business imply that the road to clean energy is perhaps now irreversible.

“We have long known, on the basis of a massive scientific record, that the urgency of acting to mitigate climate change is real and cannot be ignored. In recent years, we have also seen that the economic case for action—and against inaction—is just as clear, the business case for clean energy is growing, and the trend toward a cleaner power sector can be sustained regardless of near-term federal policies.” – Barack Obama

Will the Trump administration listen?

Nope, instead they are going to find this out the hard way when they hit the brick wall of reality.