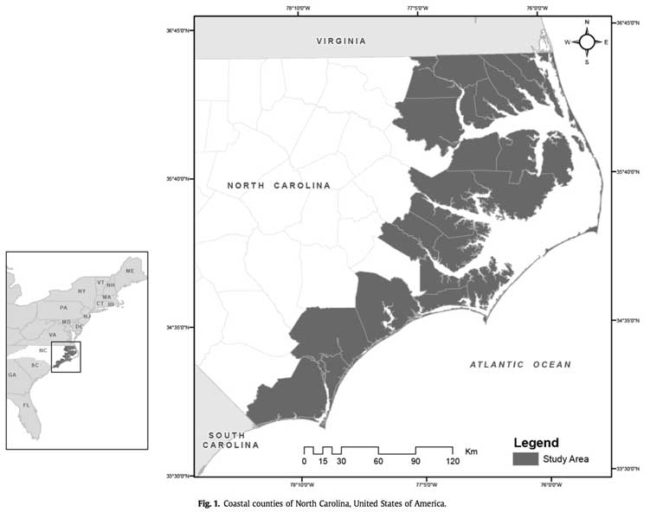 A rather obvious threat facing the costal region of the Carolinas is sea level rise. So how are government officials within the impacted areas preparing their communities?

Brian Bulla, a researcher based at Appalachian State University, conducted a survey of official in 20 coastal counties. He then published the results in Ocean & Coastal Management within a paper entitled “Climate change and adaptive decision making: Responses from North Carolina coastal officials”

Within this survey he probed their understanding of climate change, ideology, and also what specific actions they had in the pipeline to prepare.

Lets explore this a bit

If we ask ourselves who took part in this survey, then what can we find out?

Mr Bulla surveyed 283 officials, but what exactly does the term “Official”mean, was he engaging with the Mayor, an environmental officer, or a planning manager?

He did record that, and so it breaks down as follows? 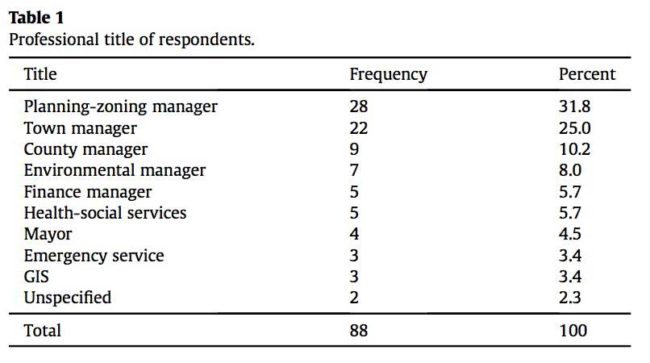 What were the results for each of those three ideas he was exploring?

In short nope, no correlations were found.

The rather interesting implication is that increasing the understanding of climate change issues amongst public officials will not result in decisive action being taken.

Relationship between threats and actions?

For this a correlation was indeed established …

A Pearson product-moment correlation was conducted to explore hypothesis two, that there is a relationship between the perception that an official’s community is threatened by climate change and their willingness to take adaptive action. Four moderate, direct, and statistically significant correlations were found for this hypothesis as shown in Table 3 including: low level, average level, higher than average level, and very high level. No significant correlation was found for the uncertain level of risk.

Most of those surveyed self-identified as “moderate” …

… and yes, as might be anticipated, political leanings do play a part …

The ANOVA analysis indicates that political ideology does have an effect on an official’s willingness to take adaptive action. Specific post hoc results suggest:

So what is this telling us?

Basically the three ideas that were explored panned out as follows …

In other words, to quote the author Brian Bulla …

“It seems to suggest that just providing people − whether public officials or the general public − with more or better information is not necessarily going to increase adaptive action,”

But once an actual threat looms, that changes things …

It’s problematic. When the threat is seen, it is perhaps too late, and all the time needed to prepare and adapt has been blown doing nothing.

The threat is real and also inevitable, sea level is rising and that rise is accelerating – taking no action is really not an option.