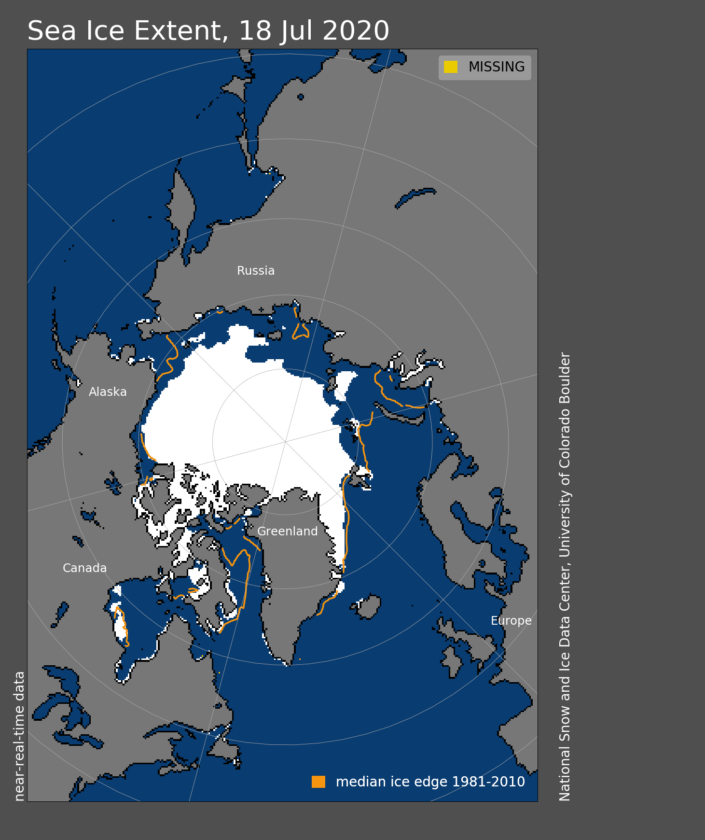 A very predictable outcome of the Siberia heatwave is the impact it has had upon Arctic sea ice.

By July 15, 2020, the ice extent was at a record low over the period of satellite observations for this time of year. The Siberian heat wave this past spring initiated early ice retreat along the Russian coast, leading to very low sea ice extent in the Laptev and Barents Seas. The Northern Sea route appears to be nearly open.

The update from the US National Snow and Ice Data centre has the details.

On July 15, Arctic sea ice extent stood at 7.51 million square kilometers (2.90 million square miles), 330,000 square kilometers (127,000 square miles) below the record for July 15, set in 2011. This places extent at the lowest level for this time of year on the satellite record. Low extent for the Arctic as a whole is largely driven by extensive open water in the Laptev and Barents Seas, continuing the pattern that began this spring and was discussed in the previous post. Ice concentrations are low in the East Siberian Sea; remaining ice in this area is likely to melt out soon.

By contrast, extent north of Alaska is near the 1981 to 2010 average for this time of year. Such contrasts serve as prominent examples of the larger variations that occur for sea ice extent on the regional scale in comparison to the Arctic Ocean as a whole.

Basically we are flattening the wrong curve.