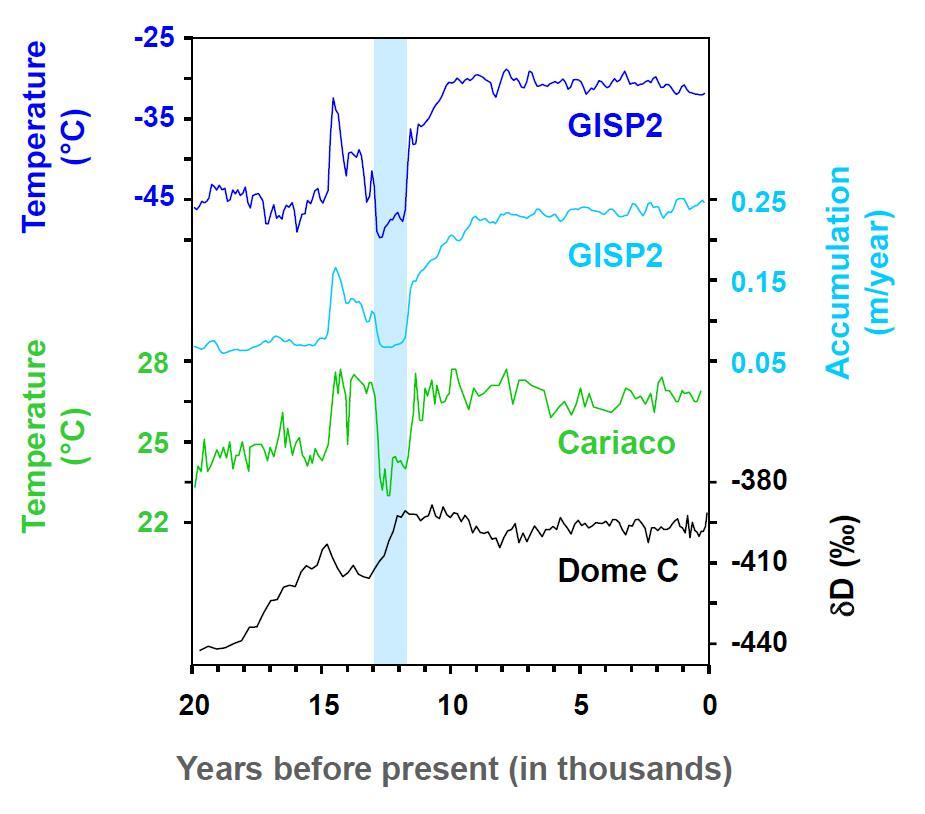 This event is referred to as the Younger Dryas.

It has been known about for some time and can be seen and measured within many paleoclimate reconstructions from many different places. For example …

Note in the above you can see it happened in the Northern Hemisphere. Dome C in the above is ice core data from the Antarctic that shows a warming and so it has no evidence of this cooling in that same period.

The “Younger Dryas” is a Weird name for this event

There is an alpine–tundra wildflower named Dryas octopetala that grows in cold climates. We know about these cooling event because we find Dryas pollen within lake sediments that date to that time, hence the cooling event is named after these …

Since 1916 and the onset and then the refinement of pollen analytical techniques and a steadily-growing number of pollen diagrams, palynologists have concluded that the Younger Dryas was a distinct period of vegetational change in large parts of Europe during which vegetation of a warmer climate was replaced by that of a generally-cold climate, a glacial plant succession that often contained Dryas octopetala. The drastic change in vegetation is typically interpreted to be an effect of a sudden decrease in (annual) temperature, unfavorable for the forest vegetation that had been spreading northward rapidly.

Well because there were several of these events, and so the most recent one is known as the younger dryas.

Why did it happen?

There is much debate about the precise cause.

The prevailing thinking is that the North Atlantic “Conveyor” current, sometimes referred to as the Gulf Stream, either greatly slowed or even shut down. This is an ocean current that pumps warm gulf water northwards and if that suddenly slows or stops you get this abrupt cooling event.

But why did that ocean current change happen?

… but the evidence for either of these is not robust.

We may in fact now have an answer because a new study has just been published.

Titled “Deglacial floods in the Beaufort Sea preceded Younger Dryas cooling” and published within Nature geoscience on 9th July, it lays out some new evidence as follows …

Known as the Younger Dryas (YD), the event is thought to have resulted from a slowdown of the Atlantic meridional overturning circulation in response to a sudden flood of Laurentide Ice Sheet meltwater that reached the Nordic Seas. Oxygen isotope evidence for a local source of meltwater to the open western North Atlantic from the Gulf of St Lawrence has been lacking. Here we report that the eastern Beaufort Sea contains the long-sought signal of 18O-depleted water. Beginning at ~12.94 ± 0.15 thousand years ago, oxygen isotopes in the planktonic foraminifera from two sediment cores as well as sediment and seismic data indicate a flood of meltwater, ice and sediment to the Arctic via the Mackenzie River that lasted about 700 years. The minimum in the oxygen isotope ratios lasted ~130 years. We suggest that the floodwater travelled north along the Canadian Archipelago and then through the Fram Strait to the Nordic Seas, where freshening and freezing near sites of deep-water formation would have suppressed convection and caused the YD cooling by reducing the meridional overturning.

In other words, as the vast ice sheets on the North American continent melted and collected in vast lakes, there was a flood of this freshwater over a 700 year period into the Arctic and then on out into the Atlantic. This is what disrupted the “meridional overturning”, or to use the more familiar term, disrupted the gulf stream that had been transporting heat from the equator northwards.

Is this a done deal?

It is part of the ongoing debate. Others still argue for a flood event via a different route, that had the same outcome.

What this study brings to the table is evidence from core samples for one specific route.

While the precise route is debated, both agree that vast amounts of freshwater ended up disrupting ocean circulation.

What does this mean for us?

Sitting in Greenland is a vast reservoir of frozen freshwater. In a warming world that gives us an ever increasing flow of meltwater then that could once again potentially disrupt the ocean circulation. It would not be on the same scale as that ancient flood because it is simply not as large a source, and yet looking back we can potentially learn about what may yet come.

The deep irony is that global warming could lead to cooling in some regions, and yet longer term the global warming might in turn offset that and even overtake it.

Two new and quite independent studies have been published in Nature with some rather dire news concerning a slowdown of ocean circulation due to climate change.

Both concern the Atlantic meridional overturning circulation (AMOC) that is perhaps better known as a Gulf Stream.

Basically yes, and more than a little bit of worry is wholly appropriate. The evidence merits it.