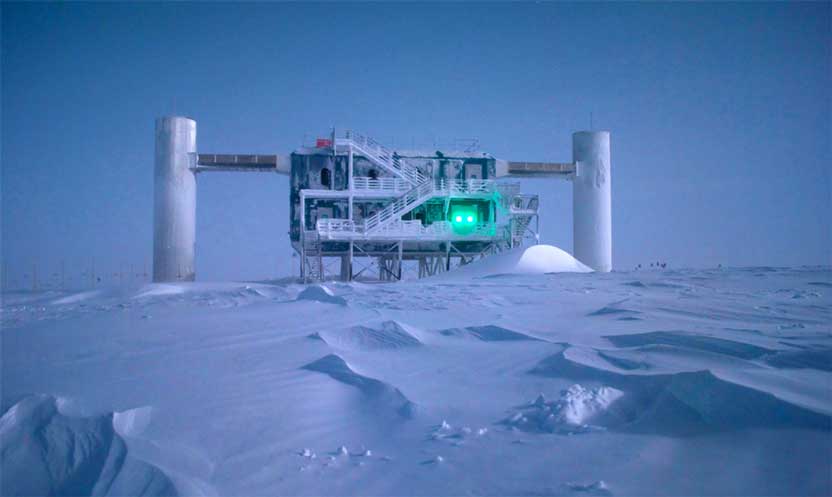 As we build better tools to see and observe how things really are our understanding of the universe grows. Multimessenger astronomy now has a new tool within its array of options.

What is Multimessenger Astronomy?

There are four different ways of detecting things within the universe. These are electromagnetic radiation, gravitational waves, neutrinos, and cosmic rays. The concept of multimessenger astronomy is that when something big happens out in the universe, we have different ways of viewing and measuring it, hence we gain far better insights into what is going on.

The first is of course a reference to visible light (telescopes that you can look through), but this also includes detectors that measure other bands within the electromagnetic spectrum that we can’t see with our eyes such as radio astronomy.

A neutron star collision that occurred in the galaxy NGC 4993 produced the gravitational wave signal GW170817, which was observed by the LIGO/Virgo collaboration. After 1.7 seconds, it was observed as the gamma ray burst GRB 170817A by the Fermi Gamma-ray Space Telescope and INTEGRAL, and its optical counterpart SSS17a was detected 11 hours later at the Las Campanas Observatory. Further optical observations e.g. by the Hubble space telescope and the Dark Energy Camera, ultraviolet observations by the Swift Gamma-Ray Burst Mission, X-ray observations by the Chandra X-ray Observatory and radio observations by the Karl G. Jansky Very Large Array complemented the detection. This was the first instance of a gravitational wave event that was observed to have a simultaneous electromagnetic signal, thereby marking a significant breakthrough for multi-messenger astronomy.[8] Non-observation of neutrinos is attributed to the jets being strongly off-axis.[9] On 9 December 2017, astronomers reported a brightening of X-ray emissions from GW170817/GRB 170817A/SSS17a.[10][11]

The latest update concerns the publication of two new papers in Science that lay out the details of how Neutrinos are now also part of Multimessenger astronomy.

The source for this comes via the Ice Cube Neutrino observatory that is located at the South Pole. The picture at the top of this article is only a tiny bit of it, the rest is buried under the surface within the ice, hence the Ice Cube name is literally correct. 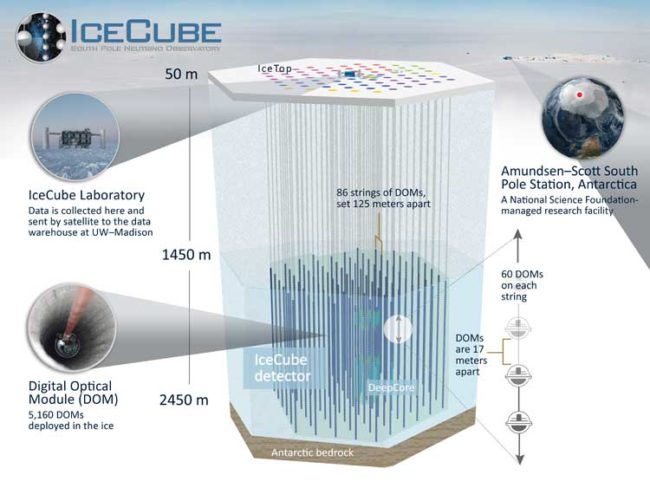 To learn more about the Ice Cube Neutrino observatory located at the south pole, you can check out their web page here.

Meanwhile, let’s dig into the details of this latest announcement by going directly to one of the two published papers.

The paper written by a very large team scientists was published yesterday in Science with the above title.  It explains how the Ice Cube Observatory located at the South Pole has been used to observe neutrinos that originated from a black hole in a far distant galaxy.

It is not the first detection of neutrinos, but rather is the first time that the origin of the detected neutrinos has been pinpointed to a specific source within the universe.

Why are Neutrinos useful as a way of seeing things?

Neutrinos hardly interact with normal matter, hence they are extremely difficult to detect. They don’t get blocked like light does, and they don’t bend like gravitational wave do, so they are a valuable new addition into how we detect and measure such far distant events. Because they reach us asis and give a clear clean signal of such events that has not been distorted in any way by normal matter, we have in effect opened a new window to the far distant universe.

The paper itself contains a well structured Abstract that does a nice job of laying it all out, and so here it is …

Neutrinos are tracers of cosmic-ray acceleration: electrically neutral and traveling at nearly the speed of light, they can escape the densest environments and may be traced back to their source of origin. High-energy neutrinos are expected to be produced in blazars: intense extragalactic radio, optical, x-ray, and, in some cases, γ-ray sources characterized by relativistic jets of plasma pointing close to our line of sight. Blazars are among the most powerful objects in the Universe and are widely speculated to be sources of high-energy cosmic rays. These cosmic rays generate high-energy neutrinos and γ-rays, which are produced when the cosmic rays accelerated in the jet interact with nearby gas or photons. On 22 September 2017, the cubic-kilometer IceCube Neutrino Observatory detected a ~290-TeV neutrino from a direction consistent with the flaring γ-ray blazar TXS 0506+056. We report the details of this observation and the results of a multiwavelength follow-up campaign.

Multimessenger astronomy aims for globally coordinated observations of cosmic rays, neutrinos, gravitational waves, and electromagnetic radiation across a broad range of wavelengths. The combination is expected to yield crucial information on the mechanisms energizing the most powerful astrophysical sources. That the production of neutrinos is accompanied by electromagnetic radiation from the source favors the chances of a multiwavelength identification. In particular, a measured association of high-energy neutrinos with a flaring source of γ-rays would elucidate the mechanisms and conditions for acceleration of the highest-energy cosmic rays. The discovery of an extraterrestrial diffuse flux of high-energy neutrinos, announced by IceCube in 2013, has characteristic properties that hint at contributions from extragalactic sources, although the individual sources remain as yet unidentified. Continuously monitoring the entire sky for astrophysical neutrinos, IceCube provides real-time triggers for observatories around the world measuring γ-rays, x-rays, optical, radio, and gravitational waves, allowing for the potential identification of even rapidly fading sources.

A high-energy neutrino-induced muon track was detected on 22 September 2017, automatically generating an alert that was distributed worldwide within 1 min of detection and prompted follow-up searches by telescopes over a broad range of wavelengths. On 28 September 2017, the Fermi Large Area Telescope Collaboration reported that the direction of the neutrino was coincident with a cataloged γ-ray source, 0.1° from the neutrino direction. The source, a blazar known as TXS 0506+056 at a measured redshift of 0.34, was in a flaring state at the time with enhanced γ-ray activity in the GeV range. Follow-up observations by imaging atmospheric Cherenkov telescopes, notably the Major Atmospheric Gamma Imaging Cherenkov (MAGIC) telescopes, revealed periods where the detected γ-ray flux from the blazar reached energies up to 400 GeV. Measurements of the source have also been completed at x-ray, optical, and radio wavelengths. We have investigated models associating neutrino and γ-ray production and find that correlation of the neutrino with the flare of TXS 0506+056 is statistically significant at the level of 3 standard deviations (sigma). On the basis of the redshift of TXS 0506+056, we derive constraints for the muon-neutrino luminosity for this source and find them to be similar to the luminosity observed in γ-rays.

The energies of the γ-rays and the neutrino indicate that blazar jets may accelerate cosmic rays to at least several PeV. The observed association of a high-energy neutrino with a blazar during a period of enhanced γ-ray emission suggests that blazars may indeed be one of the long-sought sources of very-high-energy cosmic rays, and hence responsible for a sizable fraction of the cosmic neutrino flux observed by IceCube.

There is also a Press Release

The Press Release itself also goes into a lot of detail and lays out the story here. Most of the news articles you will read have simply repurposed this press release to explain it all. So why read those articles when you can go directly to their alpha source, and to tempt you to go there here are a couple of quotes I’ve mined from the various authors involved in it all …

…“The evidence for the observation of the first known source of high-energy neutrinos and cosmic rays is compelling,” says Francis Halzen, a University of Wisconsin–Madison professor of physics and the lead scientist for the IceCube Neutrino Observatory….

…“The era of multimessenger astrophysics is here,” said NSF Director France Córdova. “Each messenger—from electromagnetic radiation, gravitational waves and now neutrinos—gives us a more complete understanding of the universe, and important new insights into the most powerful objects and events in the sky. Such breakthroughs are only possible through a long-term commitment to fundamental research and investment in superb research facilities.”…

…“These intriguing results also represent the remarkable culmination of thousands of human years of intensive activities by the IceCube Collaboration to bring the dream of neutrino astronomy to reality,” says Darren Grant, a professor of physics at the University of Alberta and the spokesperson of the IceCube Collaboration, an international team with over 300 scientists in 12 countries….

What is a blazar?

A blazar is a giant elliptical galaxy with a massive, rapidly spinning black hole at its core. A signature feature of blazars is that twin jets of light and elementary particles, one of which is pointing to Earth, are emitted from the poles along the axis of the black hole’s rotation.

Where is this specific one?

This blazar is situated in the night sky just off the left shoulder of the constellation Orion and is about 4 billion light years from Earth.

Is the blazar concept new?

Actually no. Fermi has been monitoring some 2,000 blazars for a decade. That is how they were able to identify this blazar as the neutrino source.

Do all cosmetic rays come from Blazars?

Ice Cube are advertising a job at the South Pole

OK, this last paragraph is simply a bit of fun, but it’s a real job offer …

These positions serve as the IceCube “Winterovers” and will be deployed to the South Pole for 12-13 months. Training for two candidates is anticipated to begin in Madison, WI in July, 2018. Deployment to the South Pole is expected to be in early October, 2018 for 12-13 months with no possibility of leaving during the winter months from mid-February, 2019 to mid-October, 2019.

A trip to the South Pole sounds fun … but being paid to go there for 12 months would be truly a blast.

They are looking for Linux admins who can write shells scripts and also python … but … you should also be aware that its a rather long trek to the nearest Starbucks, and in winter the outside temperature is -73C.