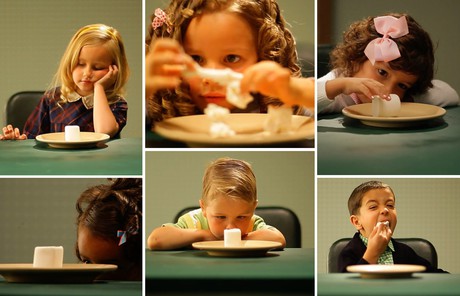 The Marshmallow Test is all about delayed gratification and the potential impact that can have on our lives. It dates back to the late 1960s when psychologist Walter Mischel conducted a series of tests on very young children.

It works like this. The child is presented with a marshmallow on a plate and told something like this. You can have that now, but if you wait, then you can have two of those later. The researcher then steps away and says I’ll be back soon, and goes away for about 15 minutes. How long does the child wait? What was discovered is that the kids who waited longer tended to have better outcomes.

Here is Walter Mischel himself talking about it …

So something interesting has popped up. A new study titled “Cohort effects in children’s delay of gratification” was published a few weeks ago.

Now here is a question. If you compare the kids from the 1960s and 1970s to kids taking the same test today, who will wait longer and so will have done better on this delayed gratification test?

So what did they actually find?

Here is what they did

Study 2 analyzed the original data for average delay-of-gratification times (out of 10 min) of 840 typically developing U.S. children in three birth cohorts from similar middle-high socioeconomic backgrounds in the late 1960s, 1980s, and 2000s, matched on age (3 to 5 years) at the time of testing.

Here is what they found

In other words, over time kids have been getting better and better at doing this test. This would suggest that successive generations will be having better long-term life outcomes.

They do have a suggestion …

We posit that increases in symbolic thought, technology, preschool education, and public attention to executive function skills have contributed to this finding, but caution that more research in diverse populations is needed to examine the generality of the findings and to identify causal factors.

What would Walter think of all this?

You might wonder what the originator of it all, the psychologist Walter Mischel who ran the first tests in the 1960s would make of this latest insight. Well wonder no more, because he is one of the authors of this new study. Over 50 years later he is still exploring this and still making new discoveries.

Oh But Wait – What is really going on?

There is another new twist to all of this.

Published in May is a study titled “Revisiting the Marshmallow Test: A Conceptual Replication Investigating Links Between Early Delay of Gratification and Later Outcomes“.

OK, so what did they discover by doing this?

There was a correlation between early delayed gratification and later life success … but … it may not in fact be a causal relationship.

Their data appears to suggest that the social and economic background of the child is what leads to them being better at delayed gratification, and hence for similar reasons, they also have a better life outcome.

In the test there were kids with mothers who had a college degree. In that group, some dug in and had the marshmallows, and some waited, yet when it comes to long term life outcomes, for that group it made no different. Those who waited and those who dug in all did just as well.

Flip that coin over and look at the kids whose mother does not have a college degree. What did that reveal? Again a similar pattern prevailed. When you compare those that dug in to those that did not, there were similar outcomes.

If you live in a poorer household then delayed gratification might not be beneficial. While there might be treats today, there is no certainty that there will be treats tomorrow, so you tuck in. In the far more affluent context, delayed gratification makes more sense because you can then be certain that the promised better treat tomorrow will be there. Poverty can be a factor that leads to a tendency to opt for short-term rewards.

Bottom Line: We may in fact have been completely fooling ourselves into thinking that developing delayed gratification skills will lead to better life outcomes. It appears to be circumstances and not delayed gratification that leads to a better outcome, and for the exact same reason circumstances also leads to a better life outcome.

It turns out that it is all rather a lot more complicated and that the previous easy answers are not so simple after all.