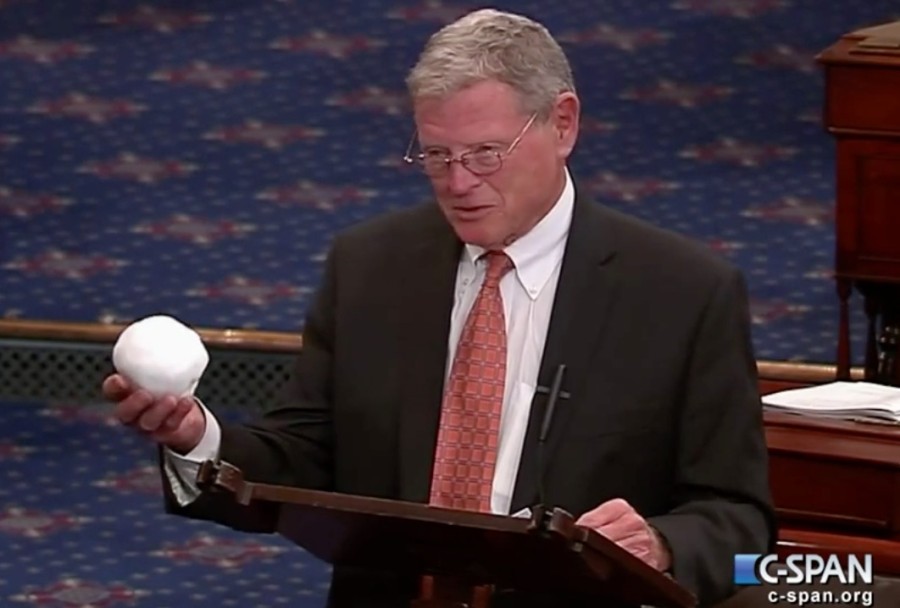 Least you wonder, no my title here is not a subtle play on words to conjure up a metaphor, it is a literal description, US Senator Jim Inhofe, brings in a snowball that he picked up outside, holds it up and then tosses it across the senate floor. His entire argument was, “Look, there is lots of snow outside, it is really cold, so obviously this Climate Change claim is a complete hoax”.

Somebody asked on twitter – “Is he really that stupid?”

Sadly yes … yes he really is, this is on par with perhaps claiming that “balloons float so gravity is a hoax”.

Here is the extract from his speech.

Now normally one would simply shrug because yet another elected Republican nut has popped up that we can happily ignore, but alas it is not that simple in his case because he is now the chair of the senate environment committee, and so it is his job to not only be familiar with the facts, but to take decisive and appropriate action.

The man has set himself up as a target for ridicule, and rightly so, because this is clearly a guy who has happily ignored the clear and decisive evidence and set his own non evidence-based opinion as something that carries far more weight than all the reports from the vast numbers of climate change scientists who have dedicated their entire careers to scrutinising the available data and concluding by an overwhelming majority (97%) with almost no disagreement that we humans are indeed fully responsible for the ongoing climate change.

So far the warmest year in modern record on that planet was the last one, 2014 – and that is not simply an opinion, that is a solid fact that is beyond dispute, so when faced with this clear evidence, he simply points outside, makes the observation that it is currently that day unseasonable cold and declares such “facts” to be wrong … except of course on that same day if you pointed outside in other places not so far away such as Florida you would discover that it was unseasonably warm, 30C to be precise, and that is a rather startling high to experience in February.

OK, let’s step back a second and clear that up. The difference is simple – daily weather is something that will generate unusual bumps and dips and so an unusually cold day in Washington, or for that matter an unusually warm day in Florida, is not by itself an indication of anything at all, because if you wish to truly understand climate, then you need to look, not just at one specific day, or even one specific weather event, but the overall trends that are taking place over a period of time.

You would expect that the chair of the Senate Environmental committee to grasp this, but alas he does not appear to do so, and that observation alone should be of extreme concern.

There are other possibilities here, when he was running for office his biggest campaign contributor was the oil and gas industry ($1.7 million to be precise), and so if he wishes to avoid a huge hole in his campaign budget during the next election, then he needs to take a specific stance to ensure that he continues to receive such funding, so perhaps this is really a story about specific industries buying a voice in the senate.