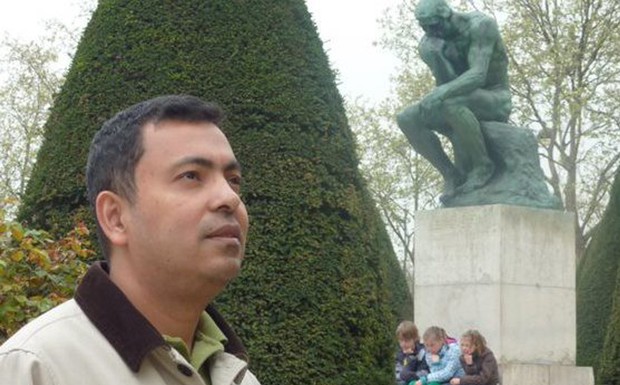 I’m personally sickened and appalled to learn that secular blogger Avijit Roy was been murdered in Bangladesh yesterday.

The IHEU (International Humanist and Ethical Union) has the details, so I’m cutting and pasting the following directly from their website …

“Abhijit Roy lives in America and so, it is not possible to kill him right now. He will be murdered when he comes back.”

These were the words of an Islamist activist referring to Avijit (or Abhijit) Roy early last year. The man making the threat, who is well-known to the authorities, has repeatedly and openly talked about wanting to see secular and freethought writers dead, and those under threat have complained that authorities have ignored his threats and incitement, despite his credible links to Islamist extremists and similar murders taking place.

Tonight, IHEU joins with freethinkers and humanists from Bangladesh in calling for an end to this fatal appeasement of death threats by the authorities in Bangladesh.

Last year Avijit Roy reported these threats to his life, in connection with his published writing from a secular and freethinking perspective. Below, we publish extracts from emails Roy exchanged with IHEU.

Avijit Roy was a well-known writer, founder of the freethought blogging platform Mukto-Mona, which he described to IHEU as “an Internet congregation of freethinkers, rationalists, skeptics, atheists, and humanists of mainly Bengali and South Asian descent”. He had previously provided IHEU with analysis around the arrest and threats against “atheist bloggers” in Bangaldesh in 2013.

Avijit Roy returned to Bangladesh from the United States around one week ago, to celebrate publishing his new science book (in Bengali) “From Vacuum to Universe”.

The Dhaka Tribune today reports that Roy and his wife Rafida Ahmed Bonna were attacked with cleavers or machetes as they left the book fair at Dhaka University shortly around 8:45pm Thursday night. Bonna is alive but in a serious condition. Roy’s murder has already been compared to the attempted assassination and later death of Humayun Azad, who was also attacked after leaving the Dhaka international book fair, as well as the murder by machete Ahmed Rajib Haider in February 2013.

“This loss is keenly felt by freethinkers and humanists in South Asia and around the world. He was a colleague in humanism and a friend to all who respect human rights, freedom, and the light of reason.

“Those who have openly made the most serious and credible threats on his life have been allowed to do so with impunity and now he is dead. As Roy himself warned, Bangladesh is appeasing the most insidious and violent strains of Islamism, and he new his own life was under threat. That appeasement of theocratic demands and naked threats must end, now.”

Another freethought blogger, Arifur Rahman, who was present at the book fair tonight, told IHEU:

“I attended the simple ceremony in the Annual Book Fair just an hour ago and discussed a few things. He excused himself to go wander around in the book fair…

“In Bangladesh, we have seen Government satisfying Islamists’ demands, not protecting bloggers, writers at all. Everyone almost accepted the fact that this will happen and will continue to happen. Government and state is not here to protect or give any help.

After the incident everyone is advising me leave country immediately. I am not interested in leaving right now. No point in living if I have to be afraid all the time.”

Another Bangladeshi writer and activist, Asif Mohiuddin, who spoke in a plenary session at last year’s World Humanist Congress about the threats by Islamists against himself and others for for their humanist writings and secular activism, said of Avijit Roy tonight:

“He was like my brother. This a great loss for the nation, and for all freethinkers in the world. We called him Richard Dawkins of Bangladesh. He was the nicest person I ever met. Just yesterday he wished me well on my birthday, today he is dead. I can’t believe this! He was my dearest friend and we worked together for 6 years against religious fundamentalism.

He was my hero, and hero of many young freethinkers in Bangladesh. Many young people were inspired by him so much. Now we have a big atheist and agnostic community, gay and lesbian community, that was possible only because of him. He was our support in every step. Whenever we had any problem, he solved that very quickly.

I am very much upset. Please do something, create some pressure on Bangladesh government by writing. Many freethinkers are in risk, they will die.”

Emails from Avijit Roy about threats by Farabi Shafiur Rahman

Avijit Roy emailed with IHEU on a number of occasions. He was most concerned about explicit and credible threats by one Farabi Shafiur Rahman. Roy felt that he was relatively safe while residing in the United States, but worried for loved ones in Bangladesh. (IHEU was not aware of his plans to return to Dhaka this month.)

We publish below some extracts from Roy’s messages in which he expresses concern about the threats from Farabi Shafiur Rahman, whose authority he clearly felt might hold some sway with people who might be prepared to actually kill him. The following text is from emails exchanged from 21 March 2014 onwards; the first email was almost certainly sent to multiple organisations and media. (The square brackets are his own, except where otherwise stated with emphasis in italics.)

“[21 March 2014] I am often involved in causes that rally support for free speech movements in Bangladesh through my writing and activism. Recently, I found that I have been targeted by a group of militant Islamists and terrorists. Farabi Shafiur Rahman, an extremist who is allegedly linked to the radical Islamist party Jamaat-e-Islami and Hizbut Tahrir [a terrorist organization that operates in 40 countries (including Bangladesh) around the world] has given me a death threat through a facebook status. It is worth noting that he is the same Farabi who threatened to kill a Muslim cleric officiated at Ahmed Rajib Haider’s (a popular blogger known by the psuedonym Thaba Baba, who was hacked to death last year by machete-wielding Islamic militants) funeral last year during Shahbagh Movement. Police at that time arrested Farabi on charges of “instigating the murder” but he was granted bail. Although he has continued to threaten many progressives in Bangladesh, no official action has been taken against him.

Most recently, Farabi wrote a death threat on Facebook to Rokomari.com (Bangladesh’s first online bookstore) and ordered the site to stop selling of my books. In his Facebook post, Farabi specified the office address of Rokomari.com and called upon his “Islamist friends” in the adjacent locality to attack. He also told Mahmudul Hasan Sohagh, the owner of Rokomari.com, that he would suffer the same fate as Ahmed Rajib Haider.  As a result, Rokomari has ‘taken  my books off its list’. The news created a huge uproar and the issue came to the attention of national media and beyond. Here are some links:

Like me, many of Bangladesh’s freethinkers have been threatened by the criminal activity of Farabi Shafiur Rahman, and it is my demand that the Government and the legal authority should conduct a proper investigation on this criminal mind and do whatever is necessary to put him behind bars.”

An IHEU staff member replied the same day, offering to provide possible assistance from IHEU, and to try to find further interest and support from a specific organisation with a remit related to his work, which we did attempt to do, though without success. We also noted that it was positive at least that there was some media coverage locally, and IHEU asked if Roy felt safe in the US, recognising that others such as Humayan Azad, threatened in similar circumstances, were killed while abroad in western states.

Roy thanked us for the reply and the attention to his situation, discussed some of the practical suggestions made, and inter alia continued:

“[24 March 2014] For the fanatic’s [Farabi Shafiur Rahman] case, as I mentioned, he has gradually been becoming a real threat for progressive people of Bangladesh. Especially when he managed to be out of jail (on bail) last year, he puts a lot of people’s lives in danger by disclosing their address and location. He is indirectly insisting his fanatic friends and follower to attack them. Yes, since I am living in the USA I am slightly out of danger. But [he expressed concerns for others – IHEU]. This guy is disclosing all the information. He did the same thing for the book store (rokomari.com). He disclosed the address of their office and asked his followers to attack the place. The store got threatened and had to withdraw my books from the store. No legal action has been taken so far. The link is here:

I lost hope for Bangladesh in this case, because I know that nobody will put any charge for such ‘small’ crime.”