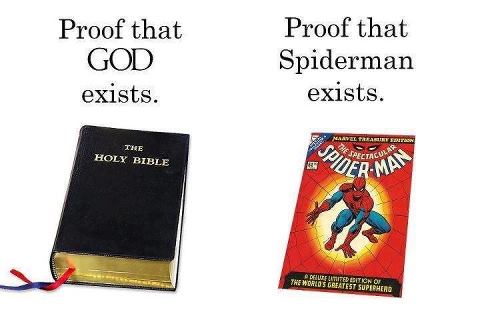 Yes, it is yet another “God-did-it” claim, and this time it is an article entitled “Ex-atheist professor says God responsible for Big Bang“.

So here is what we have …

NEW ORLEANS – A Tulane physics professor is working on a project that’s getting attention around the country – he’s trying to prove mathematically and through experimentation that God exists.

Professor Frank Tipler has studied the universe for decades – from the splendor of the earth to the wonder of the heavens above.

Tipler admits that when he started on the research, he was the ultimate doubter – an atheist.

Now though, he’s changed his tune.

“There is a God out there that created everything that is,” he said recently.

… and the evidence for this assertion is … oh wait, he is still trying to prove it, so in essence he is starting with a conclusion then working backwards looking for data to back that up. Time to roll your eyes, because this is the complete reverse of how science actually works.

His “logic” works like this  … (warning, get ready for your jaw to hit the floor) …

Tipler’s research is based on theory that if before everything there was nothing, then only a god could have brought into existence what had never existed before.

Now, let me introduce you to a very basic question from Philosophy 101 – where did this god come from?

Oh wait, the usual religious qualifier for this claim is that god has always existed … right?

So here is what is happening here …

Such thinking is something our species has always done when faced with the unknown, it is exactly what our primitive ancestors did. When faced with huge unknowns such as the sun, moon, stars, the weather or lightening, we attributed those to gods. We now fully understand that these are all quite natural and (gasp) surprise surprise, no gods required. So why should the universe be any different?

So what else does Mt Tipler claim?

Tipler explains: “God the Spirit” is the Big Bang, or the beginning of the universe; the end of the universe is explained by the well known Big Crunch theory, which Tipler calls “God the Father”; and a third singularity Tipler calls the “All Presence” is one he believes exists that connects the two. He calls it “God the son”.

Yep, this is all utterly meaningless religious babble that rests upon a cultural fantasy. It is also quite wrong, recent experimental evidence (namely the observation of distant supernovae as standard candles, and the well-resolved mapping of the cosmic microwave background) has shown that the expansion of the universe is not being slowed down by gravity but rather accelerating, so no big crunch is on the cards at all.

The article then goes on to observe …

Hey, now there you go, finally something I can agree with.

Apparently he is still working on his “proof”, but so far has nothing of any substance to offer.

So am I being unfair or is he really a nut?