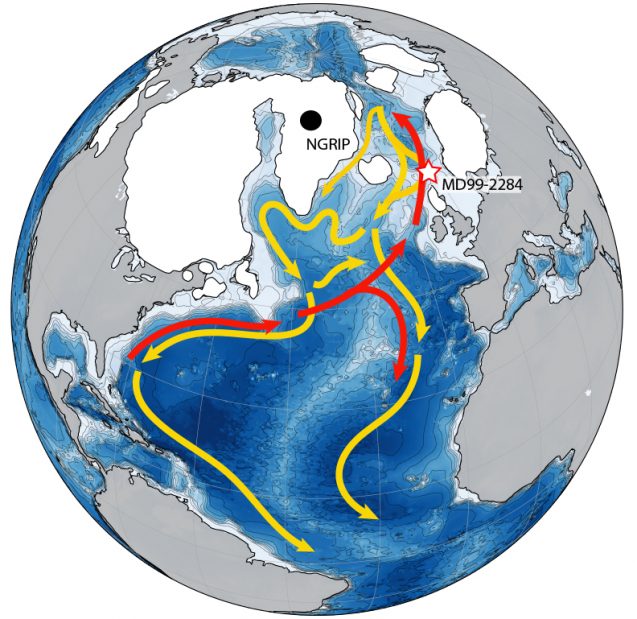 Evidence has been growing to indicate that the Atlantic Meridional Overturning Circulation (AMOC), which is something more popularly referred to as the Gulf Stream, is slowing down. What we do also know is that this ocean circulation system plays an important role in the regulation of the climate in both Europe and also the Arctic, hence understanding what the implications of an AMOC slowdown are is rather important.

A new study has been published that yields further insights.

Published within Nature Communications on 20th March 2019, this study grants us an insight into the speed at which changes can unfold.

They have basically stitched together data from the following sources …

Via the combination of these three they can gain some unique insights in the timing of past changes.

What did the discover?

we identify a ∼400-year lead of changes in high-latitude NADW formation ahead of abrupt climate changes recorded in Greenland ice cores at the onset and end of the Younger Dryas stadial, which likely occurred in response to gradual changes in temperature- and wind-driven freshwater transport. We suggest that variations in Nordic Seas deep-water circulation are precursors to abrupt climate changes and that future model studies should address this phasing.

“Our reconstructions indicate that there are clear climate precursors provided by the ocean state — like warning signs, so to speak,”

Lead author Francesco Muschitiello, who completed the work as a postdoc at Lamont-Doherty and now works at the University of Cambridge.

The Core of the Study

It has been challenging to try and work out if past abrupt climate changes happened before or after ocean conveyor changes, this alignment of core data helps to now open a new window into the timing of past events.

Finally, they could then use the Greenland ice core data to align all that with climate changes.

Net effect; they have a window into the timing of past ocean circulation slowdown and the associated climate changes.

In conclusion, our results suggest that gradual changes in high-latitude NADW [North Atlantic Deep Water ] formation are precursors of rapid climate shifts in the North Atlantic and emphasize the central role of ocean circulation in abrupt climate change, as well as its sensitivity to atmosphere and cryosphere dynamics. Given recent evidence that the current AMOC has been slowing down for several decades60,61, our findings broach the question as to whether the current decline in deep-water circulation may herald a new phase of abrupt change.

Climate models currently assume the climate responds abruptly at the same time as AMOC, so this will help to refine those models.

Why this lag, and what comes next for all of us today?

Well, that’s still unknown. That’s often they way it is with answers to previous questions, it leads to further questions.