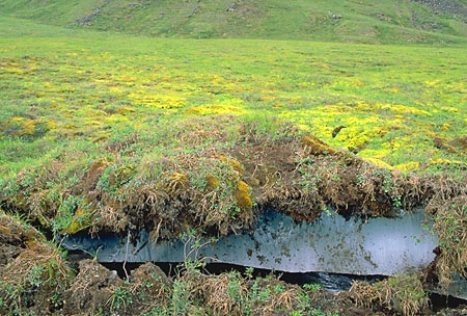 Scientific American has a good article on a recently released U.S. Geological Survey report. the report itself spells out how melting permafrost is causing significant changes to the freshwater chemistry and hydrology of Alaska’s Yukon River. There they write …

“As the climate gets warmer, the thawing permafrost not only enables the release of more greenhouse gases to the atmosphere, but our study shows that it also allows much more mineral-laden and nutrient-rich water to be transported to rivers, groundwater and eventually the Arctic Ocean,” explained Ryan Toohey, a researcher at the Interior Department’s Alaska Climate Science Center in Anchorage and the lead author of the study.

“Changes to the chemistry of the Arctic Ocean could lead to changes in currents and weather patterns worldwide,” he said.

According to the report, higher temperatures in Alaska from 1982 to 2014 caused increasing permafrost loss. As the frozen layer thawed, it caused the upper active layer of ground to expand, opening new pathways for water to flow through soil, bedrock and groundwater. Ultimately, those changes altered the chemical composition of surface water and groundwater.

You can find it published here … and yes sadly a paywall greets you if you attempt to access this early copy online.

The Key points that the paper presents are these …

The Yukon River, along with Ob, Yenisey, Lena, Kolyma and Mackenzie Rivers transport more than 11% of global river discharge into the Arctic Ocean [Holmes et al., 2012a; McClelland et al., 2012]. Both the chemistry and quantity of these rivers’ freshwater discharge play an important role in the circulation and composition of the Arctic Ocean [Menard and Smith, 1966; Aagard and Carmack, 1989]. Many Arctic rivers are experiencing altered discharge [McClelland et al., 2006].

USGS Overview of it

The USGS (U.S. Geological Survey) website does also contain a good summary of it all here …

This is the first time a Yukon River study has been able to use long-term continuous water chemistry data to document hydrological changes over such an enormous geographic area and long time span.

The results of the study have global climate change implications because of the cascading effects of such dramatic chemical changes on freshwater, oceanic and high-latitude ecosystems, the carbon cycle and the rural communities that depend on fish and wildlife in Alaska’s iconic Yukon River Basin.

The Yukon flows over a lot of permafrost. Due to climate warming that permafrost is melting, hence the Yukon is picking up thousands of years of frozen water, minerals, nutrients and contaminants and carrying rather a lot of it. This leads to a changed chemical composition flowing out into the Arctic Ocean. That in turn could lead to changes in currents and weather patterns worldwide.

It is not just the Yukon, another recent study by University of Alberta scientist Suzanne Tank documented similar changes on another major Arctic river, the Mackenzie River in Canada. It is doing exactly the same.